The Toledo-area offers a plethora of restaurants for the casual diner. But, despite a seemingly endless lineup of options, barbecue could seem underrepresented. A handful of restaurants serve smoked meats, but, in our densely saturated restaurant scene, diners could have more access to barbecue, the kingpin of American cuisine.

Smokehouse 734 is in a spot that formerly housed Nick & Jimmy’s North at 7309 Lewis Ave. in Temperance, MI, less than two miles north of the state line. Like other Sidelines Restaurant Group eateries, Smokehouse offers a comfortable, casual atmosphere and enough TVs to let everyone see the game.

On our Saturday night visit, the expansive restaurant bustled with a full crowd. Seating areas with high top tables and an impressive wraparound bar are covered with high ceilings, preventing the noise of the crowd from overpowering our experience.

The cocktail menu touted inexpensive offerings, ranging from $5 to $8. The Smokehouse Bloody Mary ($8) proved big and bad, and the pineapple cranberry sangria ($5) (one of two housemade sangria options) was fruity and subtly spiced.

Sipping our cocktails, we surveyed the dinner menu. Nine appetizer options include smoked sausage lollipops ($7.99) and poutine ($8.99). While tempted by the Kansas City Nachos ($8.99), we surrendered to the housemade brisket chili atop fries, then covered in cheese ($7.99). 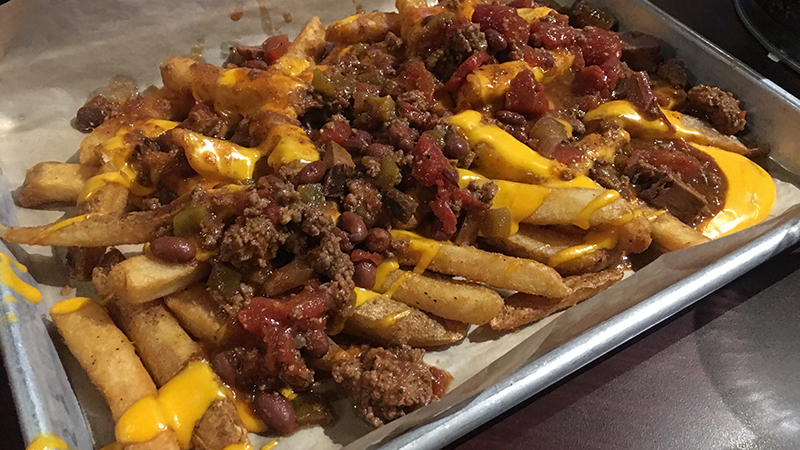 Smokehouse 734 focuses on the meat, by offering steaks, sandwiches, salads, “Smash Burgers,” pizza, and, the main attraction, Kansas City-style BBQ. While the “Smash Burgers” (made with a house blend of chuck, brisket and short rib) was tempting, we opted to satisfy our cravings with a massive plate of pit-smoked meat. 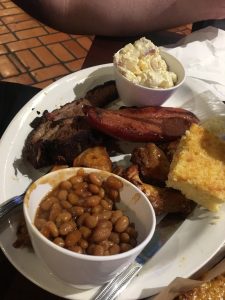 We ordered a half rack of ribs ($16.99), along with a baked potato and a cup of tangy coleslaw. The lightly-sauced St. Louis style ribs were so fall-off-the-bone tender that we picked them clean with a fork. We’re sure that someone, somewhere makes better ribs, but Smokehouse 734’s ribs went above and beyond our expectations.We enjoyed our “pick three” combo ($18.99), which brought us brisket, smoked sausage and crispy, flash-fried smoked wings, served with impossibly-good baked beans and chunky potato salad. The brisket, very tender with just the right amount of marbling, was a quick favorite. The well-seasoned smoked sausage was an easy second, the casing delivering a pleasant snap with each bite.

The prices are reasonable, but the ingredients that create this kind of barbecue are an expensive treat. To make the experience more affordable for diners, the restaurant offers a handful of specials, including $7.99 lunches (available from 11am-4pm, Monday-Friday) and daily dinner specials (like Thursday’s “BBQ for 2,” which features generous portions of two meats, two sides, cornbread and a dessert for $19.99).

Smokehouse 734’s growing carryout and catering business are particularly buzzworthy. The daily “Feast for 4” carryout special includes four types of meat, four sides, four pieces of cornbread and choice of soup or salad for $39.99. Also, online ordering and delivery (available through DoorDash) enable you to enjoy their ribs without ever changing out of your sweatpants. And, trust us, after gorging at Smokehouse 734, sweatpants may just be your closest friend.