The Lake Erie Bill of Rights (LEBOR) – an innovative new law that grants legal personhood to Lake Erie with the intent of enabling stronger legal action against its polluters— is widely seen as Toledo’s frustrated response to government inaction.

The Ohio Environmental Protection Agency has always had the ability to enforce provisions of the Clean Water Act to clamp down on polluters but has refused to do so despite years of lobbying from the Lake Erie Waterkeepers and lawsuits from Advocates for a Clean Lake Erie.

With the invalidation of the Lake Erie Bill of Rights by a federal judge this past February, one has to wonder if our government, intent as it seems on rejecting both new and existing laws, is willing to protect Lake Erie at all.

Arguably, no effort to save Lake Erie voiced the public’s feelings as much as the Lake Erie Bill of Rights. The law, an amendment to the City of Toledo’s charter, was put before voters through the ballot initiative by a group of local grassroots organizers, Toledoans for Safe Water.

The group leveraged volunteer petitioners, who collected over 10,000 signatures over a year and a half, and had to go before the Ohio Supreme Court twice after the Lucas County Board of Elections initially refused to allow voters to vote. 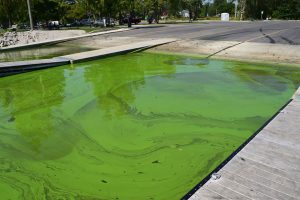 Once court rulings and an act of Toledo City Council cleared the way for the amendment to go before voters during a special election, special interest groups (primarily British Petroleum) descended on Toledo. They spent an astonishing $300,000 to smear the measure on radio, television, print, and social media.

Toledoans for Safe Water, armed with a meager $6,000, nonetheless prevailed and won the election with a landslide 61.39% of voters approving. On February 26, 2019, Toledoans proudly declared that Lake Erie deserves legal personhood and the right to defend itself that comes with it.

Overnight, Toledo became international news. Stories about it appeared in the Washington Post, the New York Times and Le Monde, while its name appeared on such popular television programs as Jeopardy! and the Daily Show. Lead organizer Markie Miller even invited to speak about the Lake Erie Bill of Rights in front of a United Nations panel on Earth Day.

But, as the saying goes: no good deed goes unpunished.

The day after its passage, Drewes Farm in northwest Ohio – backed by money from major agribusiness lobbying groups like the Ohio Farm Bureau – filed sued against the City of Toledo in federal court, alleging that LEBOR threatened its right to farm. A stay was placed preventing the use of the law while the District Judge Jack Zouhary evaluated its merits.

The same judge later permitted the Ohio Attorney General to join the suit on Drewes’ side while denying Toledoans for Safe Water from joining the suit on the side of the City. On February 27, 2020— a year and a day after its passage— the Lake Erie Bill of Rights was ruled invalid.

Though the City did initially appeal of the verdict, on May 5 it voluntarily withdrew citing financial costs and the budget crunch brought on by the outbreak of COVID-19. With that, a law passed by 275,000 people was invalidated by one. The courts had declared that Lake Erie was no longer a living entity.

Nearly six years after the water crisis, Toledoans remain frustrated by the lack of progress on Lake Erie’s condition. Visitors to the Maumee River downtown wait to see if the water will turn fluorescent green again every summer. State officials repeatedly give lip service to stopping the pollution, but still refuse to invoke the Total Maximum Daily Load (TMDL) process provided to them by the Clean Water Act. Governor DeWine’s much-touted H2Ohio program commits $172 million of taxpayer money to various programs, but only if they help with treating symptoms instead of stopping the root cause.

Organizers with Toledoans for Safe Water are regrouping to plan their next moves. In the meantime, communities all over the United States, inspired by the LEBOR, are undeterred by its loss in the courts and pursuing similar laws using the “Rights of Nature” model. Eleven counties in Florida are currently working to enact such laws in response to ongoing “red tide” pollution of their waterways, while a community in Washington is working to establish legal rights for the Salish Sea. More groups are currently forming in Minnesota, Mississippi, and Canada.

Though LEBOR is dead for now, a movement to grow the “rights of nature” model on which it is based is growing rapidly. From the success of that movement, we may well live to see Lake Erie granted legal rights.

The question remains: will Lake Erie stay alive long enough to use them?