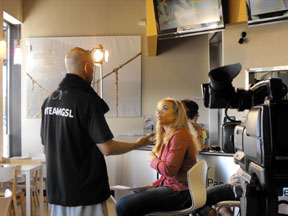 André Savage dreams big. “I’m Berry Gordy. I’ve been waiting for my Michael Jackson to show up. I think I found her.”

Savage’s ‘Jackson’ may be Erika White, and her “ABC” might be FitZone TV. The show, which combines interviews with lo- cal health and nutrition experts, cooking demos, and fitness segments, debuted to 10,000 viewers on September 30 this year. “That was the day that more than 17,000 people were downtown at the Susan Komen race, and we still pulled those numbers,” says Savage.

When asked separately how they made it happen, both White and Savage are quick to give credit to God. “I just showed up,” laughs White. “I was content to ask for Hamburger Helper, God gave me a steak. But I did have to cook it.” It also helps that Savage’s first show, Game Savvy Latenight (GSL), has an established Northwest Ohio presence and loyal following. “The extent of our marketing was we put together a promo for FitZone that told about Erika’s journey,” says Savage. “We ran it on GSL, and we did some Facebook announcements. Boom. It took off.”

A longtime friend of White and her husband, James, Savage knew Erika had the right stuff, including a megawatt smile, jour- nalistic experience from college, serious communication chops — she’s the vice president of the local union chapter of Communications of America Local 4319 — and a compelling back story. “I was fat,” says White, “and I wanted to fix my high blood pressure and play with my kids. I found out that insurance would cover gastric bypass surgery if I gained 40 pounds, and I started to figure out how I could gain the weight to get the surgery! I can laugh about it now, but I was desperate, and I didn’t even realize how depressed I was.”

Instead, White took off her weight the old-fashioned way, through diet, exercise, and discipline. “It was tough. I remember how much I hated those early workouts,” she says. “But there was one instructor who’d walk by me while I was sweating and say, ‘good job, Erika.’ That was power- ful. And that’s what I’m doing now, saying ‘good job, you can do it,’ to everybody who tunes in.”

Savage considers her an ideal part- ner. “I need Erika,” he says. “GSL has a solid following, but it’s late night; it’s got a distinct urban rhythm. I want to expand Savvy Television, and FitZone TV captures a whole different audience.” He’s completely straightforward about his local media rap. “I have a lot of confidence and swagger, and I know I’m kind of polarizing.” He reports that when the first FitZone episode aired with his executive producer credit, “Erika’s phone started ringing off the hook, with people ask- ing her, ‘are you sure you want to work with that guy?’ But she believed in me.”

White has tremendous respect for her business partner. “I bring the fitness and health,” she says, “and André knows the entertainment/TV side back to front.” Both brain- storm ideas and write stories, tapping into their extensive networks and imaginations for inspiration. Savage, who’s been in the public access trenches since col- lege, produces and shoots the show; Gerald Hill helps out with editing. Quality control, particularly when it comes to sponsors, is key, and both parties want to keep advertis- ing minimal. “I’m very picky,” says White. “I would never, ever want companies that sell diet pills or scams, like a wonder shake that costs 80 bucks, to be sponsoring the show.”

That desire makes funding an ongoing battle — the team has decided to take a hiatus from production after the fi- nal episode of the first 12-week season on December 30. Savage believes the show has tremendous potential, “but we have to get the financial backing. We’re attracting a big audience on a tiny budget. If we can get the funding to match the vision and the production values to match the qual- ity of what we deliver, we can kick ass even harder.”

Like his role model, Berry Gordy — who set up Motown HQ in a two-story house in downtown Detroit — Savage is dedicated to keeping it real and homegrown. He has huge heart for kids who start life, as he did, in rough neighborhoods. “I’m dedicated to showing as many people as I can that there are ways out of poverty besides playing basketball or selling drugs. You can write, produce, work a camera, be in front of the camera.”

It’s extremely hard work, but neither complains. “We’ve been given a ball, and it’s up to us to keep it rolling,” says White. “So we keep at it, and don’t stop, and you know what? We got a good-sized ball right now.”