It took over 15 years for Fred and Chanell Dedrick to kick-start their dream of owning a coffee shop… only the trajectory was not quite as they had envisioned. 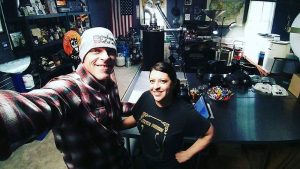 “We imagined something like Cheers, but everybody doesn’t need to know your name,” joked Fred. “Iron Bean has been 15 years in the making…we just didn’t have the courage [to start the business] until about two years ago when we finally pulled the trigger.”

Like many small business owners, the Dedricks found themselves developing a company different from their original vision.

“Iron Bean was supposed to be a coffee shop, but whatever ended up with is a roasting company. In our minds, we conceived of a billion dollar facility— there’s no budget in your imagination— but the reality is different,” explained Fred, with a laugh. “We started shopping downtown for a location, found one for $80,000, and figured we could sell our house and move into the building. But then we realized you can’t get a 30-year mortgage on a business building!” 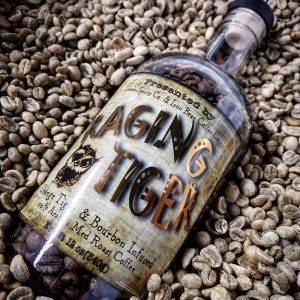 That hurdle didn’t dissuade their indomitable entrepreneurial spirit. The Dedricks improvised: “Plan number two was the nicest coffee truck you ever saw. But it would have cost us about $80k for a truck,  to outfit the whole thing for roasting and selling. We said to ourselves, ‘We can’t not do it just because we can’t afford it.’ At that point, we were hobby roasters. We set up a Facebook page and a website and started selling online… to save up to someday buy our coffee shop,’ Fred recalls.

The Dedricks began roasting coffee out of their home in South Toledo, using a 1-gallon cast iron pot. They started selling and the word spread through friends and family on social media.

In April of 2017, website orders started coming in from people without any connection to Fred or Chanell, and emboldened by the uptick in sales, Fred decided to quit his job. They cashed out Fred’s 401k and bought a military truck— Fred is a Marine Corps veteran— to be converted into a “food truck.” 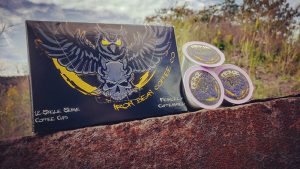 Despite steady sales, the income wasn’t enough to keep them going, so Fred went back to work and between Iron Bean’s internet sales and Fred’s full-time job, he wasn’t able to continue work on converting the truck. Now they plan to have the truck complete by spring 2019.

Until then, iron Bean’s customer orders continue online (and those with a Toledo address get a reduced rate). Fred jests, “Most of the time we will hand deliver [the coffee], driving by the house!”

Fred gushes that he couldn’t have started Iron Bean without his wife and “100% business partner,”  confessing, “She steers the ship. She’s the one who pushed us to do this.”

Fred and Chanell met shortly after Fred got out of the Marines. They are both from upstate New York— but chose to move to Toledo because “it felt like home”— and within three months of meeting each other, they were married. That was nineteen years ago. They are still going strong… just like Iron Bean Coffee.