With a wide variety of influences and an eye on success, Eerie Point is a rising star in Toledo’s local music scene. The band will host an album release show at 9 p.m. on Friday, January 11 at The Ottawa Tavern, 1817 Adams St.

Eerie Point formed in early 2016, and are a unique grouping of talent with a full spectrum of musical interests and influences. Bassist Dan Hatfield explained the native Toledoans originally met through mutual friends, and that their individual backgrounds contribute to their genre-crossing sound. 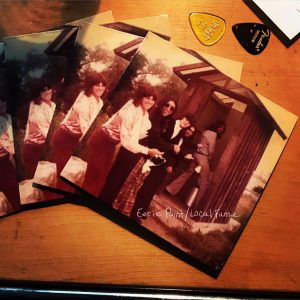 The band’s first album, titled Local Fame, will be digitally available January 11, but more notably, the band will be giving out free CDs of the new full-length for show attendees. T-shirts and other merchandise will also be available for fans.

Eerie Point is Steve Becker on vocals, Ryan Dalton and Chase Dusseau on guitar, bassist Hatfield and Michael Straub on drums. Though they’ve yet to expand to other regional venues, the band has played extensively in Toledo at Innovations’ Frankie’s, Ottawa Tavern, and Civic Music Hall, and has an impressive local following.

They started like most bands do, playing the cover circuit, before they transitioned to the kind of original, thoughtful songwriting heard on songs like “Artificial Things,” or “Montana,” from the group’s early releases, First EP, and Second EP, respectively. Their Facebook events are also titled simply: “Eerie Point Plays for Charity,” “Eerie Point Plays Wesley’s,” or “Eerie Point Plays for Freedom,” for example. While they may have been keeping things simple in name, they reserve plenty of creativity for the music.

The ten tracks on the forthcoming album were recorded at Audio Matrix Recording Studio in Toledo. Hatfield explained that the band has a collaborative approach to songwriting, as each member brings something different to the table. The bassist’s own musical education at Toledo School for the Arts, for example, brings with it a funk and soul influence that listeners will pick up on. Guitarist Dalton’s educational background includes a degree in jazz performance from the University of Toledo; an influence that also comes through.

“A lot of our songs are bluesy, but then incorporate pop and ballad-style riffs,” Hatfield said. “We have a little bit of everything, and we like it that way.”