We found the beef

Some people claim to read Playboy for the articles. Others say they visit Hooters for the wings. We didn’t go to Hamburger Mary’s— Toledo’s new bar for burgers and drag queens— for the food, but we are glad we visited them.

Hamburger Mary’s opened in late November in the corner of The Docks, which once held Cousino’s Navy Bistro, Pier 7, and Forresters, among others. But the five owners— Lorrie and Steve Ricker, Joe Jones, Kevin Grames, and Ralph Clark— did more than slap a fresh coat of vibrant purple paint on the building. The interior is adorned with colorful murals, paintings of the drag-themed franchise’s mascot, “Mary,” and a flashy, purple sequined stage.

The place is ripe for photo ops, and the bustling Thursday night crowd (which included the largest bachelorette party we’ve ever seen) took full advantage, raucously posing for snapshots.

Drinks and a side of entertainment

The restaurant’s first impressions include a quaint lounge on the left and a giant wrap-around bar. Mary’s bar boasts a huge variety — including Toledo Spirits selections and a (sharable) 60oz hollowed-out commemorative fishnet leg that can be filled with booze.

The cocktail menu is as playful as the restaurant, with “Marytinis” and “Special Tease Cocktails”. Our orders— the Hurricane Mary and the ‘Total Top” Rita— while not “classic cocktails,” were creative concoctions typically found on college campuses and at bachelorette parties — sweet, easily chugged and packing a punch. Order one. Or two. Or more. And bring a designated driver, as we did. 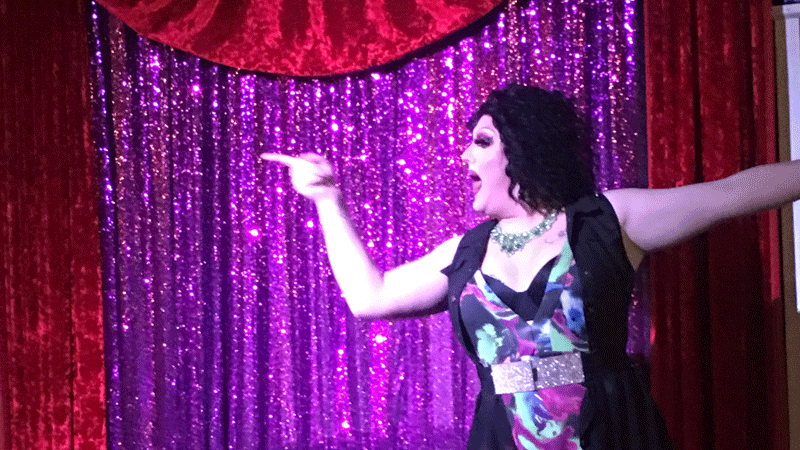 The entertainment— Hamburger Mary’s most notable attraction— is comprised of local queens gracing the stage five nights a week. The Lady Porcelain offers Trivia Night at 7pm on Wednesdays. Ember Holiday Monroe— who kept our table laughing all night— entertains crowds with Name That Tune at 7pm Thursdays. On Fridays, Saturdays and Sunday nights, at 6pm, 8pm and 9pm, a roster of Toledo Queens take the stage for drag shows. The new drag brunches, on Sunday mornings at 11am and 1pm, give patrons a new reason to rise and shine.

Hamburger Mary’s menu is succinct and clever, with burgers as the primary focus. Still, the eatery’s limited menu also showcases a selection of sandwiches, salads, and “special tease” entrees (like the chicken and waffles). Typical bar-fare “appeteasers,” such as fried pickles, and”love me (chicken) tenders,” include a shockingly rich and creamy homemade mac-n-cheese.

While we were tempted by the sandwiches— the turkey, bacon, lettuce and avocado “Bird of Paradise” caught the eye — we stuck with Mary’s namesake: “big and juicy Mary Burgers.” The menu highlights nine specialty styles, all with witty names. Patrons can choose between four protein options— fresh Angus beef, grilled chicken breast, the plant-based Beyond Burger, and a house-made black bean veggie patty.

The Proud Mary— two Angus patties topped with grilled onions, bacon, mushrooms, cheddar and pepper jack cheeses, and Mary’s special sauce (a blend that will be familiar to fans of the Big Mac)— was juicy and decadent, even when served sans bun to please the calorically-conservative diner in our group.

Experimenting with protein options, we moved beyond the Angus with two selections. The Queen Mary, served with a juicy grilled chicken breast, proved a smart option, though likely not such a “healthy choice,” as suggested by the menu. Our oddest selection was the Beyond Burger-styled (vegetarian) Barbarella-Que, topped with thick bacon (what a confluence— vegetarian and bacon), onion strings, jack and cheddar cheeses, lettuce, pickles, Mary Sauce and bacon. Our server smartly checked to make sure we did, indeed, want the bacon on the plant-based patty. We did, and the combo was delicious. 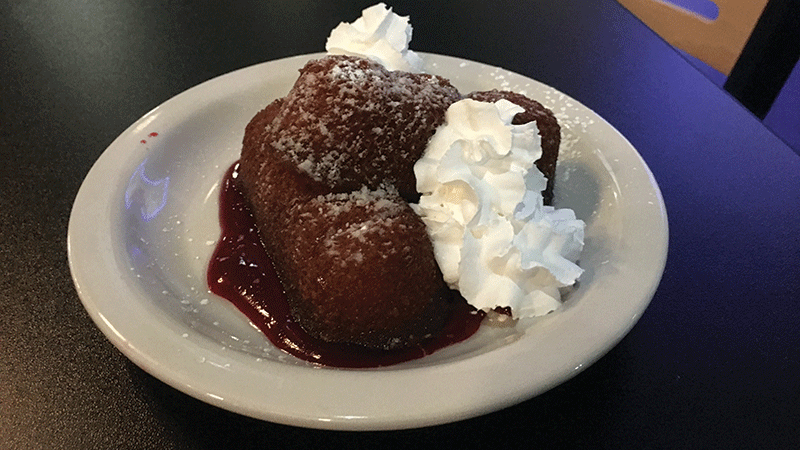 Overall, Hamburger Mary’s fare was tasty “Good enough” feels like an understatement, though it’s unlikely we would order take-out. We didn’t have any specific complaints, but we also didn’t have any specifically brag-worthy bites— besides the deep-fried Twinkies (a dream come true). The food was better than expected and what we needed to maintain stamina for Mary’s real attractions— entertainment and strong drinks.

We were impressed by Hamburger Mary’s local love and Toledo spirit. It’s a destination restaurant, but since the next closest location is in Chicago, we expect it to continue to blossom. Mary will enjoy one hot and proud summer at The Docks.