A new addition to the Toledo culinary scene, Chosica Peruvian Restaurant lends international variety to area dining options. As Peruvian food novices, woefully ignorant of what to expect, we found ourselves in the charming dining area, seated near a large group who clearly knew about the staples that make the foods of Peru so appealing. The group was obviously pleased, and so were we as we sampled the menu’s offerings, wishing we had room to try more.

Owner William Del-Rio, originally from Lima, Peru, joined his family in Bowling Green four years ago to experience something new, he explains. Now he has opened Chosica in the location that previously housed La Taqueria Autentica Michoacana at the corner of Hill and Byrne. Since opening in early November, Chosica has experienced a steady influx of Toledo patrons, both those of Peruvian descent, grateful for the authentic traditional cuisine, along with adventurous foodies who try to embrace international fare.

We were happy to discover that not only did Chosica offer Mexican Coca Cola with real cane sugar (praises), but they also had Inca Kola, a soda that looks a lot like Mountain Dew, but tastes like cream soda with a hint of lemon verbena.

When our Papa a la Huancaina arrived with a rich yellow sauce covering a bed of potatoes, the dish was topped with a hard-boiled egg and garnished with olives. 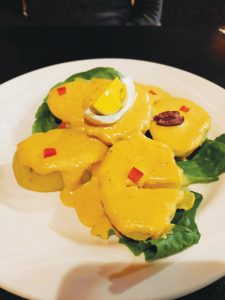 Potatoes, a staple in Peruvian dishes, as evident from Chosica’s menu, are readily available in Peru, which has the largest variety of potatoes in the world (a bit of trivia for you there). The dish consisted of boiled potatoes served cold on a bed of greens. At $5.50, the affordable, filling appetizer had a unique sauce. Huancaina, a sauce made with mild yellow chiles, creates a rich flavor without any spiciness.

We chose the Aji De Gallina and the Lomo Saltado as entrees. Two very different dishes, the Aji De Gallina provided a healthy portion of shredded chicken mixed into an Aji Amarillo sauce, a cheesy puree of aji yellow peppers, that was similar to the Huancaina with mild, but rich, flavors. The dish was served on a bed of boiled potatoes and a side of white rice.

The Lomo Saltado was the winning selection. The tender, marinated beef tenderloin was stir-fried with red onions and yellow Peruvian peppers (Aji Amarillo), tomatoes and green onions. Bathed in a topping that included soy sauce and red wine vinegar— a testament to the multicultural influences inherent in Peruvian food, from indigenous Incan to Japanese ingredients— every bite was a treat for our palates. 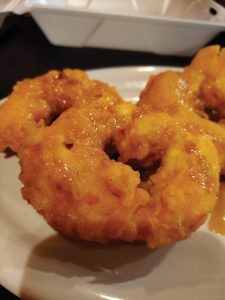 We ended with the oh-so-delicious picarones, pastries drizzled in dark honey. They are a doughy-on-the-inside, crunchy-on-the-outside dessert with a hint of pumpkin. The traditional postre de Peru was the perfect note to end on.

With few local South American food restaurant options, this opportunity to savor Peruvian food, with its distinct flavors, is a unique reflection of the indigenous and immigrant peoples who have influenced the cuisine. Chosica Peruvian Restaurant adds new flavors to Toledo’s culinary landscape that should not be missed.