Second Hand Mojo aptly describes their sound as Midwest rock with a Southern fried flair, and those who’ve listened to the band’s original music will certainly hear the homage to classic rock from the 70s and 80s, infused with a gritty blues influence. The blues aspect is evidenced by the Lightnin’ Hopkins “Mojo Hand” reference founding member Vern Springer (guitar) drew on when he named the band.

“When asked to describe the rhythm in my riffs (a little lazy, as far as the meter goes), I responded that it was timing borrowed from my affinity for blues music,” says Springer. “There really is no new ground being broken in music, but rather the re-imagining, refinishing, or repurposing of someone else’s ideas or visions. Kind of like a second hand store.”

Now the five-piece, based in the Canton/Detroit area, are ready to share their debut album (After Midnight) with the masses, beginning with a show at The Pub this month to celebrate its release. James Hampton (bass) and Chuck Riepenhoff (vocals) are both from Toledo, making a release party in the Glass City a natural step toward establishing Second Hand Mojo’s broader regional appeal. 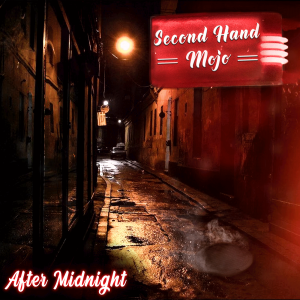 The six songs on the album are representative of songs the band has played and perfected over the years. Frontman and lyricist Riepenhoff suggests that they are a “best of” compilation of what the band has been working on for so long.

“Each song is a little something different,” explains Riepenhoff. “There’s a song that sounds like total classic rock, ‘Call Me’. And then ‘Hold On,’ a song that has that 80s rock sound. “All About You” is a slow, bluesy, burning rocker. ‘One Last Song’ is kind of an 80s influenced ballad. While ‘After Midnight’ and ‘Saturday Night’ are just good old straight-ahead rock n roll songs.”

The single, “After Midnight”, has gotten a lot of traction, with 4,000 streams in one month on Spotify and a steady climb on College Radio Charts, which provides weekly rankings of what singles are being played on college stations nationwide. “If it [“After Midnight”] gets picked up somewhere and gains some momentum, and people are digging Second Hand Mojo who-knows-where… we’ll see if there’s a demand for us to go play a show there. We’d be willing to make that happen,” says Riepenhoff. 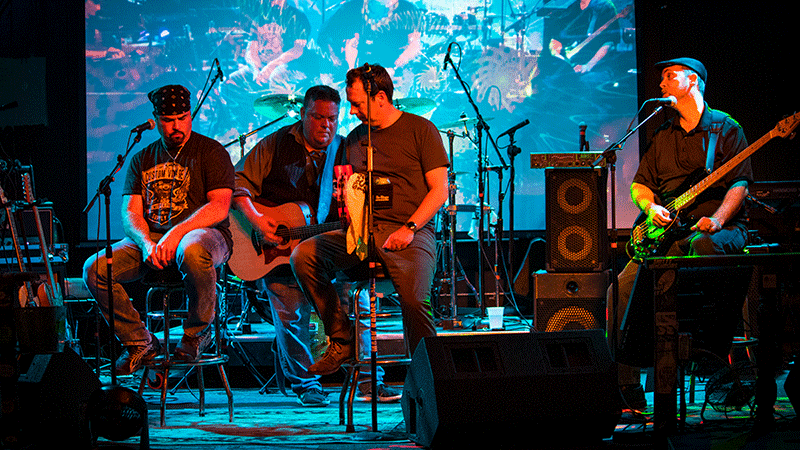 Scott Brokaw, Vern Springer, Chuck Riepenhoff and James Hampton. Brokaw and Stringer are the founding members of the band. They later added Riepenhoff and Hampton, who knew each other from their college days playing in Toledo’s 90s music scene, and finally Marq Andrew Speck on keys.

For now, the band doesn’t want to lose their mojo regionally, so they are focused on shows like the one coming up at The Pub. As a group of guys ranging in age from late forties to sixties who work full-time jobs (Riepenhoff is a pharmacist and Springer works in the software industry), it is truly impressive that they have found the time and inspiration to dedicate to the band, creating original music that resonates with a college-age demographic.

“There are a lot of great musicians out there who have written great music throughout their lifetimes. (And that music) deserves to be heard just as much as any radio hit out there,” adds Riepenhoff. “Unfortunately, most of that music stays on a phone or computer at home, an unfinished song idea that never sees the light of day. So it’s a true blessing that we have been able to piece this band together at this stage in our lives and to turn our ideas into actual songs for everyone to hear and enjoy.”