Open for over five years now, UNB Soul Food Restaurant has become known for its fried catfish and shrimp, indulgently cheesy side dishes, and greens seasoned in a way that no other eatery can match.

Rhonda Witty, UNB co-owner, served us our meal as she prepared for the steady influx of dinner-time customers that followed our arrival. She was well into her opening routine when we got there and was soon flooded by carryout orders, then quite a few in-store diners. It’s a small establishment, but that lends to its appeal. As Rhonda talked to patrons, her friendly, comfortable demeanor conveyed that she knew many of them. Despite being busy, she clearly takes the time to make diners feel at home in her restaurant.

UNB stands for Universal New Beginnings, the same name of the church Rhonda and her husband, Robert, founded and have pastored for 19 years. The church was the impetus for the restaurant, which began when people inquired about the enticing smell that was forever wafting into neighboring storefronts.

“It started out as cooking meals for our members at Bible study,” says Witty. “It dawned on me that we were having the study around meal time, so I started making wing baskets and things like that. People started smelling it and asked, ‘Could we get some wings?’”
She says it was never her dream to open a restaurant, but she and her husband embarked on this adventure together with Rhonda working in the kitchen and Robert managing the front.

Witty was raised in the small town of Maybee, MI. “They used to tease us that it may be there; it may be not— because it’s so small,” she laughs. Her grandparents farm, where they grew their own greens and yams, is where she was first exposed to soul food. “They would kill and prepare everything that we ate.”

She always loved to cook, but she says her Aunt Jill is the person who “ignited my flame.” Granny Jill’s Fried Chicken, wings dipped in homemade barbecue sauce, is named after her and is Witty’s favorite dish. 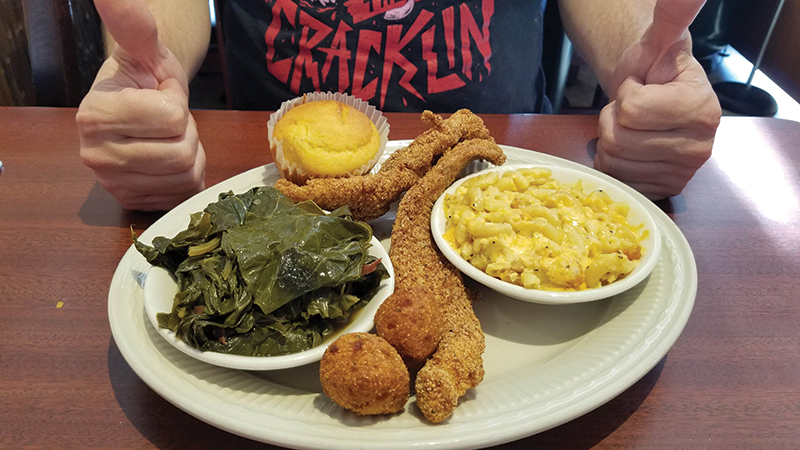 We began with the garbage fries, a heavy combo consisting of crispy fries, shredded cheddar cheese, thinly sliced onions, sour cream and pulled pork drizzled with barbecue sauce. The sauce had a sweet, tangy flavor that is best compared to a Kansas City-style barbecue— my favorite variety.

As we worked on the basket of fries, our entrees arrived. I opted for the shrimp feast, a hearty meal that came with six fried shrimp, hush puppies and a corn muffin. I chose the scalloped potatoes and fried green tomatoes as my sides. It was a lot of food. I had to pace myself to taste everything while also leaving room to sample my dining companion’s order. 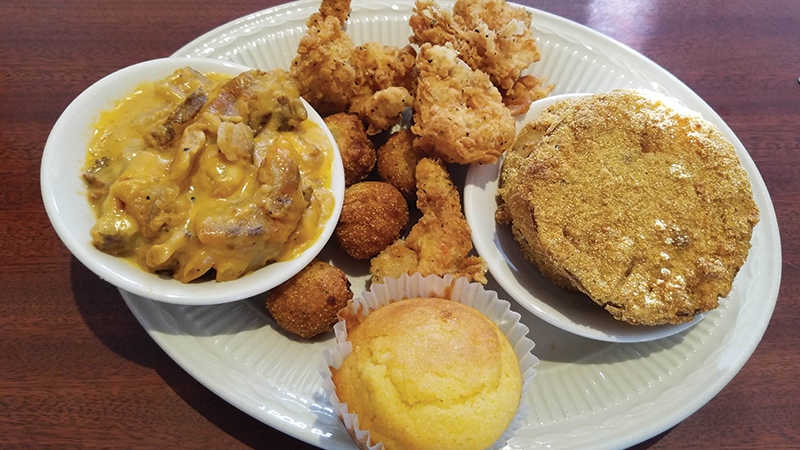 The breading on the large shrimp was crispy and well-seasoned. Tender, and not overdone, the shrimp were one of the highlights of our meal. Getting these right is no easy feat— I’ve had my share of overcooked, rubbery fried shrimp. UNB’s did not disappoint.

My dining partner had fried catfish, mac and cheese, hush puppies, and collard greens that were full of flavor. The mac and cheese and my scalloped potatoes were probably the most irresistible part of the meal. Both had a generous helping of melted cheese that kept me extending a fork for more long after I thought I was too full for another bite.

I have to mention the fried green tomatoes, another dish that is easy to get wrong, but that UNB does right. Fried in a cornmeal breading, like the catfish, the tomato slices were not too thick. The consistency was just as it should be— juicy, but not so juicy and heavy that it causes the breading to break and fall apart before you can take a bite. They held together well and we ate half of the portion Rhonda served us. We had to take the rest home in a to-go box (UNB portion sizes certainly more than satisfy).

Other appetizing menu options include Po’ Boys, fried chicken meals, chitterlings, barbecue ribs, pot roast, pigs feet and other savory soul food. The fried smothered pork chops and rib tips are customer favorites. We had no room for dessert, but the mason jar double chocolate delights and sweet potato cheesecake looked tempting. Rest assured, we will be back to sample more of the menu.

“One of the things we pride ourselves on is that, when you walk through our doors, you’re part of the family,” says Witty. “You’ll get food that’s prepared and served with love.”