The science of the NYC slice

If you’re driving fast, it takes about eight hours to get to New York City to grab a slice of the acclaimed hand-tossed, thin-crust, bigger-than-your-face pizza. For a shorter trip, drive down Bancroft to the newly-opened Mancy’s family venture— The Stubborn Brother Pizza Bar.

It’s in the water

Owners John and Gabrielle Mancy know what makes New York pizza so great. It isn’t the style, it isn’t the look, it’s the water. New York water is sourced from the Catskills and the Delaware Watershed and is considered “soft,” meaning it has lower concentrations of calcium and magnesium than most cities.

But hey, enough with the science. Let’s move on to the subject in hand— the dough. A basic pizza crust recipe has five ingredients— flour, olive oil, salt, yeast, and water— and at The Stubborn Brother Pizza Bar, according to John Mancy, water is 65% of the recipe.

To replicate the pizza New Jersey-native Gabrielle Mancy grew up with, and what John fell in love with (while falling in love with Gabrielle), they went straight to the source, using the world’s first molecular water replication system, the New York WaterMaker. 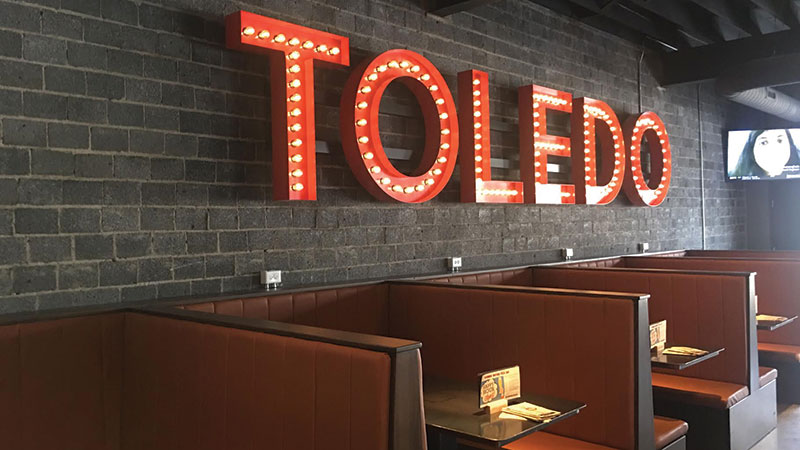 While we aren’t exactly chemists (though I did pass my high school chemistry course), noticing the difference between Toledo and New York water isn’t something that requires any education. John and Gabrielle invited us into the kitchen to illustrate the difference water makes, employing two simple tests.

First, a taste test of a good old-fashioned glass of water. We sipped the familiar Toledo tap water— hailing from Lake Erie, and the pure, yet filtered, water tasted, well, like it always does. The New York WaterMaker provided a surprisingly stark contrast— refreshingly clean and noticeably different.

Next, the dough— a test of the eyes. At Stubborn Brother, all dough is fermented for four days. The restaurant’s Italian Pizzaiolo Chef, Alessio Carabetta, explains the wait makes a difference, and I know better than to argue with someone from Rome. The dough made with Toledo water was firm and dense, with few air bubbles forming, while the New York WaterMaker dough was elastic, fluffy and begging to be shaped into a crust.

It was finally time to sink our teeth into the crisp-crusted slices. While New York City slice size is “yuge,” Stubborn Brother slices are more of a Midwestern “huge.” They’re big, and a single $4 slice is more than enough to fill you up. The toppings are fresh and high-quality, but the dough is what really sells it. “It was a dream of mine to bring East Coast pizza back to Toledo,” says John, “And we did. We hear from New York natives that it tastes like New York Pizza, and that validation is important.” 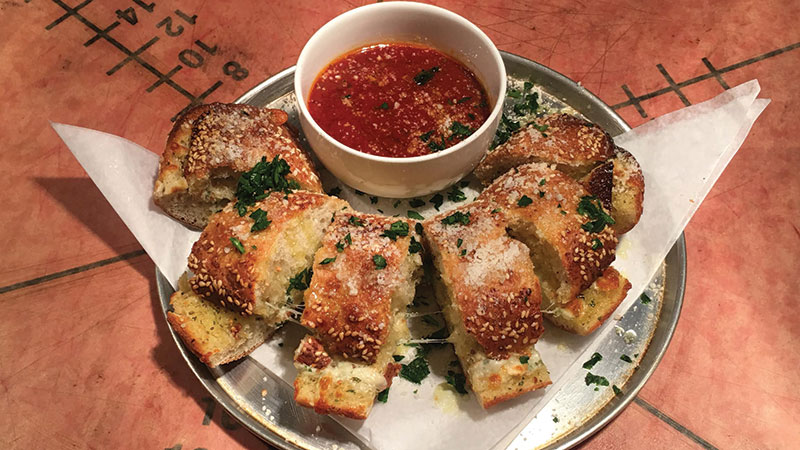 A slice of the good stuff

Like a true New York-style pizza joint, Stubborn Brother sells pizza by the slice— $4 during regular hours, and $2 during happy hours (3-6pm and 10pm to close, Monday through Friday). They boast generous happy hour specials (two slices and a drink for $8? See you there). But if you want a full pie, the restaurant also offers a build-your-own 18” for $17 along with a host of signature pizzas, all adorned with premium toppings.

The menu is rounded out with other tantalizing options, including gluten free pizza crust, subs, as well as salads, appetizers, and more. The full bar keeps the appetite whet, and a mighty beer list, featuring Maumee Bay Brewing Company’s Macqueen’s Cider, tempted us during our afternoon visit.

Regrettably we were too full for dessert, as their options include warm chocolate chip cookies and soft serve ice cream (made using a machine straight from the Jersey Shore Boardwalk where Gabrielle grew up), served Italian style and topped with extra virgin olive oil and salt. Delizioso!