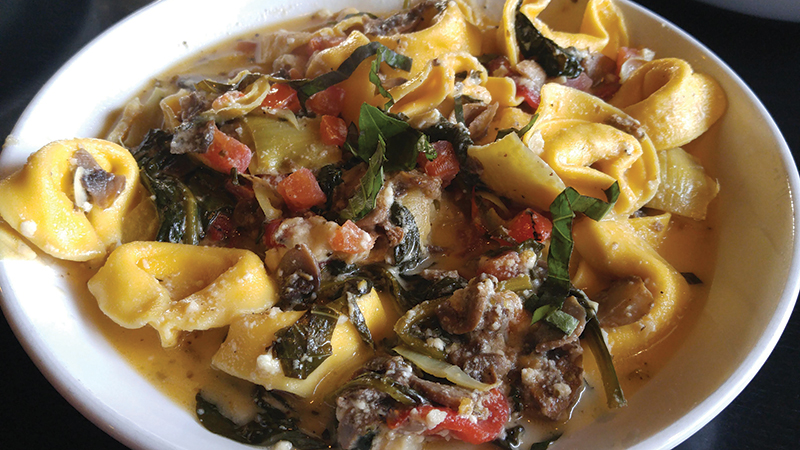 For those of us who don’t come from a big Italian family but kind of wish we did, dinner at Lena’s Italian Restaurant in Blissfield, Mich., is a good place to live the experience. An evening in the cozy dining room feels more like a party, where warm hospitality and great food are never in short supply.

Stefano Zanger, the second generation of his family to run the restaurant, was in high school when his mother— yes, there really is a Lena— opened a small, carry-out pizza place in Lambertville. Six years later, he was in college and running his uncle’s restaurant when a Blissfield restaurateur approached the family. He was ready to sell and thought the Zangers might be interested. “It was exactly what we wanted— in a small town, not a lot of seats,” Zanger said. “I thought I might have a restaurant someday, but when this came up I said, ‘Yes, let’s do it. All in.’”

Nineteen years later, Lena’s is a local favorite that continues to evolve while keeping its founder at the heart of everything they do. “I want it to be about my mom,” Zanger said. “She laid the foundation, and I’m building on that.”

Mama’s recipes, made from scratch

Lena came to the U.S. from Sicily when she was 21, and always loved to cook. She stepped away from the restaurant three years ago for health reasons, but her recipes are still being served daily, made from scratch.

“It’s the same traditional Italian food,” he said. “Our marinara sauce, that’s mom’s Sunday sauce. We had that as our Sunday dinner for years, and we don’t make it any different here.”

Lasagna is their biggest seller, the pasta carbonara is amazing, and the tortellini Vincenzo… You really can’t go wrong with any of Lena’s dishes. Special offerings like the seafood pizza, available only during Lent, and the arancini— stuffed, deep-fried balls of risotto known simply as rice balls in Blissfield— are posted on the Lena’s Facebook page to let fans know when they’re available. And then there’s Lena’s Special Chicken.

“That’s one of our best sellers,” Zanger said, but he admits he wasn’t interested when Lena urged him to put it on the menu. He’d run restaurants before and was sure it wouldn’t sell.

“I said, ‘Mom, no one is going to buy a piece of breaded chicken with some garlic and olive oil on top. Who wants to eat that?’” But when a regular customer came in wanting to try something new, Lena made her special chicken. He loved it so much that he asked for a second order so other diners could try it.

They loved it, too.

“She turned to me and said, ‘Now put it on the menu!’” Zanger said, reenacting his mom’s stern finger pointing. “That reminded me to always listen to Lena.”

Since Lena turned the restaurant over to her son there have been a few changes, including a new front entry to accommodate those waiting for a table, a three-season patio and a redesigned logo: a cartoon Lena, a bowl of spaghetti in one hand and a spoon in the other, welcoming everyone who comes through the door.

“She thought of this place as her home, and I always want her represented here,” Zanger said. “This place is her.”