Spend the weekend promoting unity, acceptance and awareness of the LGBTQ+ community and join The Toledo Pride Foundation and Equality Toledo for the 6th Annual Toledo Pride Festival, which will also offer the service of American Sign Language (ASL) Interpretation all weekend long. Time to celebrate inclusion.

So grab your friends and family, bring an open mind, and get ready to party all weekend long, August 28-30.

The Evolution of Pride

The LGBTQ+ community has had a big year. The U.S. Supreme Court granted equal marriage rights for all of its citizens, allowing thousands of loving couples to officiate their relationship the way they deserve. The “T” in LGBTQ+ has begun to be fully recognized: transgender issues are finally entering the mainstream, bringing an extremely difficult struggle to light in the public arena.

Moving forward, of course, doesn’t necessarily mean forgetting the past.

While Pride is a celebration of how far society has come, it’s also a recognition of everyone who has helped lead us there. Our achievements could not have happened without a long legacy of protests. Without the people who refused to be silent. Without the couples who were denied fair housing, fair wages, and the equality they deserved. Without the 45,000 people who died during the AIDS epidemic in the 1980s (CDC, 1988). Without the trans women who live with a one-in-twelve chance of being murdered. Without the trans women of color who live with an even rougher statistic: one-in-eight. (Source: Trans Student Educational Resources).

History shows that pride is never granted. Pride is seized.

During the early morning of June 28, 1969, the NYC police raided the Stonewall Inn, a gay bar in Greenwich Village. Members of the LGBT community quickly responded with a series of demonstrations, some quickly turning violent. Now referred to as The Stonewall Riots, these protests are often considered to be the turning point that initiated a national focus on LGBT rights in America. The following year, organizers commemorated the one-year anniversary of The Stonewall Riots with the nation’s first Pride parade. Attendees were anxious and afraid, but knew that this was a necessary step toward equality. While the community marched for Pride, this pride was a struggle. The pride was a response pain. The pride was a response oppression. The pride came as a fight and had a single goal to achieve: acceptance.

Since then, Pride has transformed into an international celebration. The somber tone of the movement’s origins still remains, but this connection has increasingly become memorialized, not internalized. While Pride does not forget, Pride also wants us to do more than just remember. It’s time to celebrate our victories, remember our past, and continue to work on the future. Pride is walking forward, and you are invited to join.

Toledo Pride was conceptualized in 2008 by Lexi Staples, then owner of the lesbian bar Outskirts. In a conversation with her mother about what Toledo was lacking, she knew immediately. In 2010, with $500 donated by her mother, she organized the first event, strategically choosing August instead of June so as not to compete with other major cities' Pride events. Unexpected, 2,500 people showed up, "but we handled it and it was really fun," says Staples.

The next year, after moving to an outdoor venue, they attracted 5,000 attendees. It's grown exponentially, reaching well over 18,000 attendees last year. Talent from the early years has included Deja, The Boys Without Skirts, Empress Fontaine, Thunderpussy, and Spectrum. Staples reminisces, "It's been a pleasure to be involved with making this happen here in the city." This year's headliner will be Canadian tribute outfit Always ABBA. Other acts include Backbone, Noisy Neighbors, and Arctic Clam who'll return again to close this year's festival. "We've had some really cool performers like Eric Hymen and Ry Ry."

The entire process excites Staples, who's also the director of The Collingwood Arts Center. "Every year we do this event and it grows, it proves how much we need it… and everything we use and rent for our events equals local dollars going back into town. I think it's a really great thing for our community." The city has embraced the event and enabled revelers to openly celebrate and express themselves, proving what a friendly city Toledo is at its core. "It's really making people feel maybe not more comfortable with their community, but more comfortable with being out in their community," noted Staples.

The LGBTQ+ community is strong and proud. Like Pride itself, Toledo has a diverse group of strong people who are fighting for a better future. Rick Cornett, Lilian Briggs, Lexi Staples and Nick Komives all dedicate a large portion of their time to enlivening the community and empowering its participants. We asked these influential activists what they are proud of and what Pride means to them. 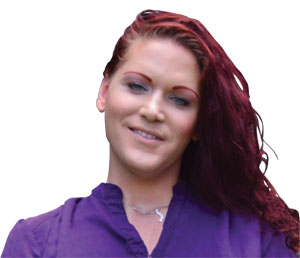 “Our media isn't favorable to transgender people. The media misgenders, gives the wrong name, blames victims of violence. It's all about victim shaming… the first thing I learned about being transgender when I came out was that I was going to die. More than likely by the time I was 30. (We're told) you can only be a prostitute, you can only be an escort, you can only be a human trafficking victim, you can only be a porn star, and you can only be a drug addict. So whatever happens to you is your fault. 'Well if you had only chosen… but I don't know why anyone would choose for 2/3 of the world to hate them. Why would you choose that? I'm just living my authentic life. 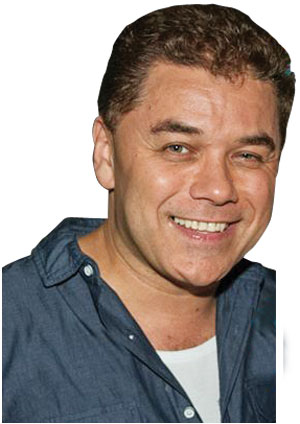 Historian, activist and promoter for the LGBTQ+ community

“Pride to me is a very personal issue within each person. My mom taught me to take great pride in myself at a young age, not only in my appearance but with the way I treat others. I've always been proud of myself and it shows in the way people treat you. A person with no self-pride gains little respect for themselves or others. Gay pride is being proud of yourself and your community and accepting who you are as a LGBT person and not hiding in the closet in fear. Walk proud and be proud of who you are.

Life is short and I don't have time trying to hide or deny who I really am or choose to love. 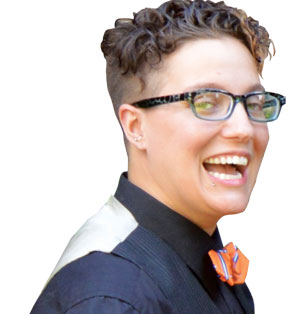 Director of the Collingwood Art Center

"In 2012, my partner and I got engaged and were really excited. Since same-sex marriage was legal in other states, we thought we'd have a destination wedding and be legally married…After getting a wedding dress we decided to wait until people could be married in all 50 states. So we've had a wedding dress sitting in a closet for 2 and a half years, waiting to get married… when the Supreme Court ruling came down, she was the first person I heard from.

I was recently filling out some paperwork and I had to say I was single, [as opposed to married], but it was the first time I really got to choose to write single. It's interesting to write single and to know that next year I'm going to be writing married on things. This is my choice."

"To me personally, Pride used to mean fun, but I would say as I work more in activism it becomes more about expressing our need to be heard and valued in the community."

Grab your glowsticks and layer on some neon. 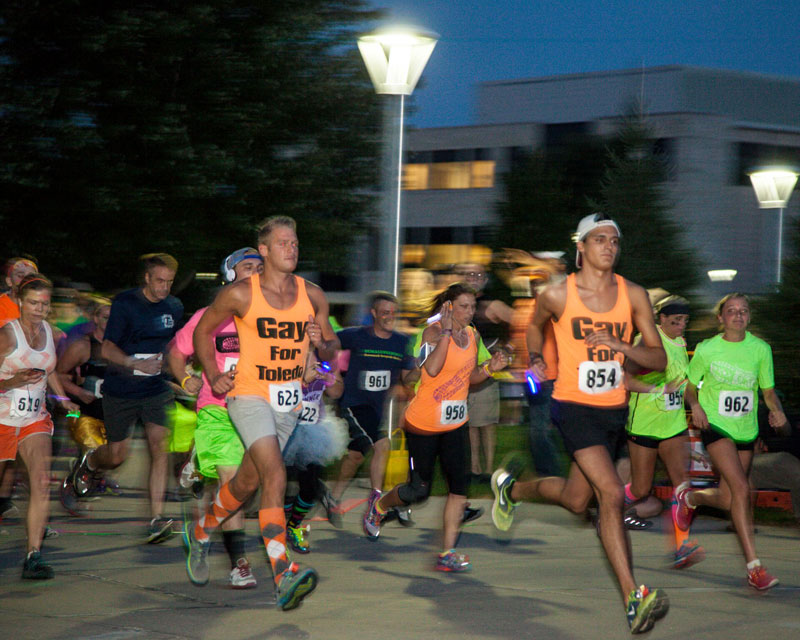 Go for a run Beginning at dusk: exercise your body and your rights, with the Toledo Pride Nite Glo 5K, 1-Mile Fun Run, and the Walk or Roll. 2014’s Nite Glo saw over 400 runners, and even more are expected this year for the pre-race warm up, blacklight tunnels, illuminated pathways and finish line, a DJ and more. For information on registration, visit ToledoPride.com

Promenade Park. Admission is $5, or $3 with a non-perishable food item to donate for the Toledo Northwest Ohio Food Bank, the recipient of all proceeds.

This is the day everyone is waiting for, hosting the Best of the Fest: the day of the Toledo Pride Festival, which best mirrors the first event held 6 years ago. Get up early for a parade you will never forget, and stay out late for the best party of the summer. 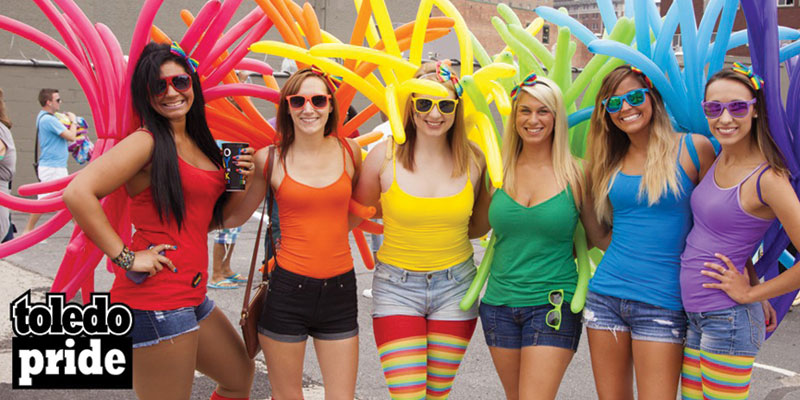 Noon: Celebrate with saucy performers and festive floats, with trophies awarded to the best entries, as the Pride Parade moves through the streets of downtown Toledo. This year, Pride welcomes Cincinnati native Jim Obergefell as the Toledo Pride Parade Grand Marshal. Obergefell filed the landmark Supreme Court case which now guarantees marriage as a fundamental right for all same sex couples.

After the parade, the Toledo Pride Festival officially begins. Over 75 booths with faith groups, and community organizations, as well as food and merchandise vendors, will fill the park. Climb aboard The Sandpiper Boat for the Pride Ride as it cruises down the Maumee River, with four 40-minute cruises, departing hourly, from 2pm-5pm. Live entertainment will go all day, with local favorites including Bird’s Eye View Circus, Arctic Clam, Flabongo Nation, The Dumb Easies, and more. This year’s headliner, Disco tribute band, Always ABBA.

Noon-midnight in Promenade Park. Adult admission: $5/before 7pm, $7/after 7pm. Children and teens under 18 are free. 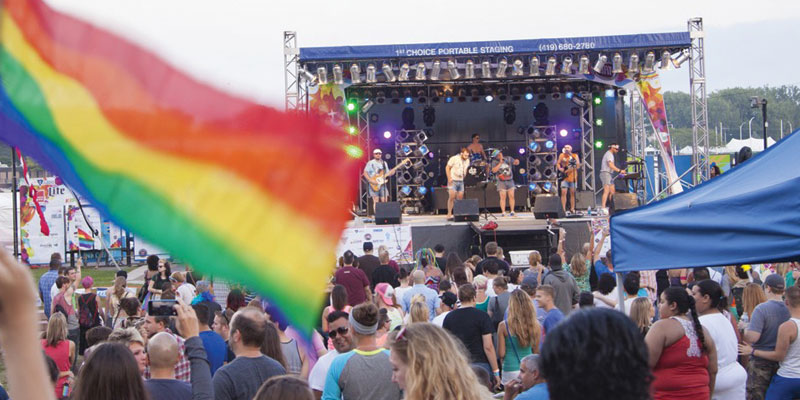 Enjoy a little R&R with the whole community during Pride’s Sunday Funday. This is the perfect chance for the whole family to celebrate pride. From noon-3pm, families are invited for kid-friendly games, activities, and more. No alcohol sales will be allowed until 2pm, to ensure a child-friendly environment.

After 3pm, the Toledo Pride party will pick up some more steam, with more live music, food, friends and beer, lasting until 10pm.

For the first time, Sunday Funday is free.

Don’t forget: Toledo Pride is a cash-only event, so please plan accordingly. Benches and seating are also limited, so feel free to bring your own chair or blanket. For more information, including schedules, maps and more, please visit ToledoPride.com