On Monday, January 19, 2015, the University of Toledo hosted the annual Martin Luther King, Jr. Unity Celebration at Savage Arena. About halfway through the program, a peaceful demonstration was staged by the Community Solidarity Response Network of Toledo (CSRNT), a group which had been denied a chance to formally speak at the event. 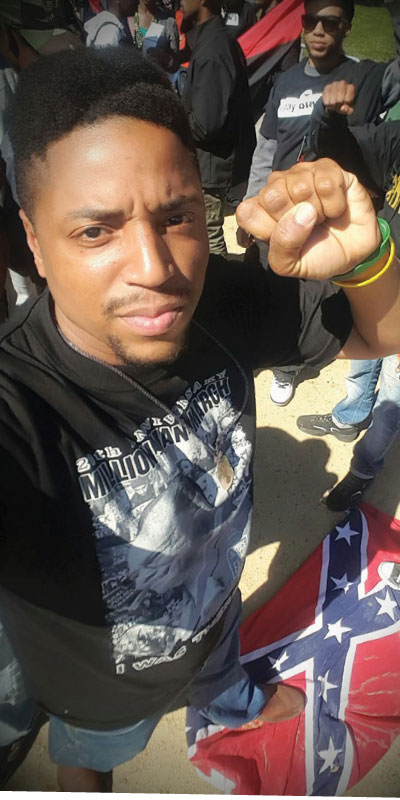 CSRNT,  only two month old at the time, had been formed the day after the announcement that Darren Wilson, a white Ferguson, Mo. police officer, would not be indicted for the shooting death of Michael Brown, a black teenager.

Mack, then a dedicated member of CSRNT,  did not take part in that demonstration, which he describes as “the most brilliant demonstration Toledo has seen in a long time.”

“I got scared of the establishment and got cold feet,” said Mack. “I promised myself never to let that happen again. I let fear win, but that experience caused another level of growth.”

He “just couldn’t stay away” from activism and politics, especially when watching the events of Trayvon Martin and Michael Brown.

After the Brown incident – where “hands up, don’t shoot” became a national rallying cry against police violence – Mack needed a way to cope and fight. At the time, he worked near the heavily traveled, predominantly white, intersection, and for seven weeks spent his entire lunch hour doing something bold and daring.

“I started to walk with my arms up above my head,” he said. “It worked like therapy for me. It gave me peace because I was doing something, I went from a caterpillar to a butterfly. I grew so much during that time.”

Mack’s silent statement was noticed by many.

“People knew what I was doing,” he said. “Slurs were thrown at me. I got called the N word over 100 times. People would yell, but I would also get honks. I posted it all on social media. Every day felt like slow motion.” Since then, he’s been active in promoting Black Lives Matter, organizing a day of resistance and remembrance on the Brown shooting anniversary, and planning alternative, peaceful events during a recent neo-nazi rally.

Mack, engaged in politics all of his life,  is a product of a hard-working, entrepreneurial dad, and a mom who volunteered in the 1982 election campaign of then-newcomer Marcy Kaptur.

At the ripe of age four, Mack worked as a volunteer for Jesse Jackson’s 1988 presidential campaign, and later began reading about Toledo history. Soon after, he took part in a Kaptur-led young leadership program, and once met Polish President Lech Walesa.

Growing up, he also had several black role models, such as former Mayor Jack Ford – with whom he became friends –  but Mack never thought that seeing blacks in prominent positions was anything exceptional or unique. “I just thought it was accepted, because that’s what I had around me,” he said.

Giving it the old college try

As a college student at BGSU (2003-2005) and UT (2005-2008) he remained active in student government. Through campaigning for Barack Obama in 2008, he knocked on so many doors – 20,000 he estimates – that he developed a lesion on his middle finger which would not heal. Yet Mack couldn’t afford medical attention. So, in an ironic twist, Mack chuckles that through the Obamacare policy the President enacted, he was able to take care of his finger, thanks in part, to campaigning for Obama.

He welcomed the first of his two daughters in 2009, but soon encountered hard times. He had run-ins with the law, which included marijuana possession and driving under the influence charges, and he went through bouts of depression, which threw his life off track.

Imagine all the people

“I hope it will inspire the students to see all that they can do,” he said. “There’s a disconnect we have with the past and we don’t talk about it in a practical sense.” 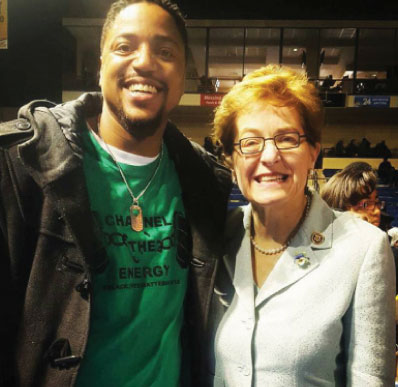 Mack also has his sights set on a future campaign of his own, possibly for City Council in 2017, and, someday, he aspires to run for mayor.

“That’s something I’m considering,” he said. “I’m really focused on doing the best I can do. The only reason I’d do that is because I’d be in a position to help other people. To be honest, it’s on my radar.  I stand for everybody being treated equally. I want there to be equality for everybody, from a social justice perspective. I just really believe my duty here on earth is to have an impact on other lives.”

He can be found on the Internet under the name Julian ‘Golden Rule’ Mack, a borrowed nickname from Samuel Jones, who served as Toledo mayor from 1897-1904. Mack calls Jones “undeniably one of the greatest Toledoans ever.”

“Simply put, that’s what I’m trying to do here,” said Mack. “We’re told we can have life, liberty and the pursuit of happiness – we should have that. The only way we can get that is through the Golden Rule.”