Hey, we might be adults (sort of), but we’re as obsessed with candy as any regular kid, so when Halloween comes around, our publishers always insist that we trick or treat at local celebs’ houses. So, we round up a cohort of 20-somethings dressed as ghouls and goblins to visit houses and completely creep out the parents waiting for their kids on the sidewalk. Every year, we pretend we hate it, but we totally don’t. Check out what ended up in our stash this year:

Although indoor lights is a great sign for a hopeful candy grabber, we were disappointed after making our way across Broadway Street. In retrospect, it was foolish to expect an answer, given there wasn’t another trick-or-treater in sight. Opal’s house was not seasonally decorated, but instead had 2013 campaign signs and random parts of toddler play sets. After about five minutes of aggressive knocking, we called it quits. 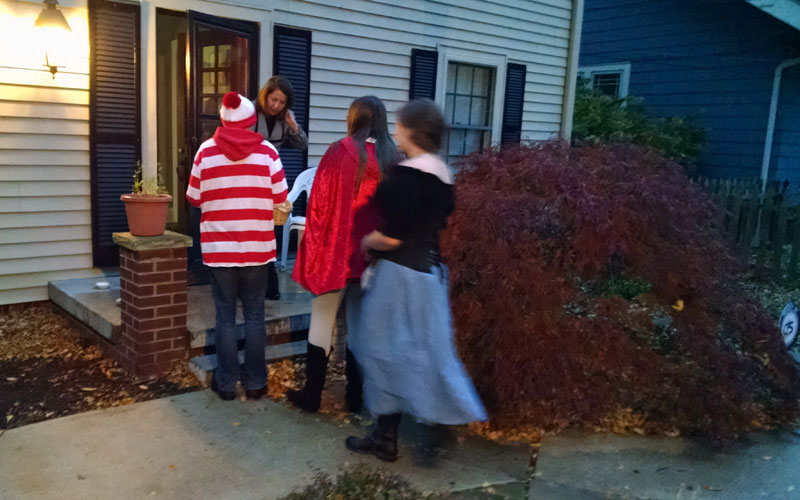 Despite a sketchy entrance through the backyard (thanks GPS!), the trip to the Spang residence was delightful. With a smile, Spang provided the choice of a full-size Snickers bar, Pringles or fruit snacks. Like anybody with a brain, we quickly grabbed a Snickers and expressed our gratitude. The house was “decorated” with a single campaign sign, but despite the lack of Halloween spooks, everyone left with great appreciation.

There was a small set of uncarved pumpkins stashed in a corner of the small porch— that’s it. No response at the door and just one trick-or-treat companion on the street. Considering the dark appearance of the house, we wouldn’t have attempted a knock on the door if we weren’t aware of who lived inside.

Sandy Drabik Collins’s house did not disappoint! She and her sister, Wendy Ondrus Dedian, were standing outside, wearing green Sandy Collins t-shirts, waiting to greet and give out candy/goodie bags and frisbees to trick or treaters. They both greeted us warmly, and once Sandy Collins knew we were from the City Paper, she got a picture of us in our costumes and let us get a picture with her. Though there were no distinct Halloween decorations, the front of her house displayed beautiful lawn work and flowers. We were given two goodie bags filled with fun-sized candy, Halloween pencils and other small trinkets. Not only was there a wide variety of offerings in the goodie bags, but there were multiple pieces of candy (Milky Ways, M&Ms, Twix, Crunch bars, and other favorites inside)— the candy definitely hit the spot!

We pulled up to the address, and noticed that there weren’t a lot of houses on the street with their lights on. Paula Hicks-Hudson’s house had no porch light on, but a light was on in the house. There were no Halloween decorations, though there was a large Paula Hicks-Hudson sign in the yard. No candy here for expectant trick or treaters. Sorry, folks. 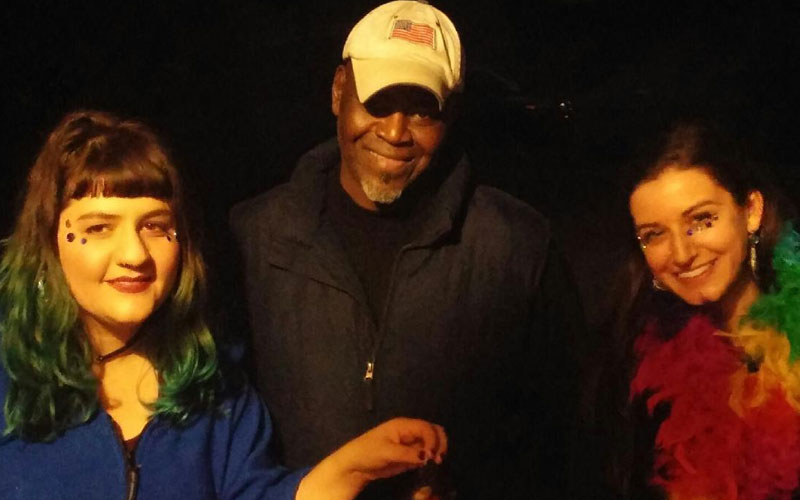 Bell’s neighborhood was bustling with life, with screaming kids running away from the house clutching their loot. When we walked up to his home, we saw a spread of spooky decorations, including a high-quality skeleton hung near the door. Bell clearly went all out— that plastic skeleton must have been at least $40. Big spender! When we got to the door we were greeted by a squad of campaign helpers, drinking some sort of dark red liquid out of a wine glasses (cannot confirm the contents). They quickly informed us that Bell was briefly inside to refill the candy bowl. When Bell came out, he assured us that all the good stuff was just taken by the children, hinting that he might of had the prized king-sized Snickers. Bell was still generous with the candy, giving us handfuls of name brand candy— the kind you would actually buy at a gas station. He also passed out a cheesy but sportif campaign baseball card. Bell was friendly, in the spirit, but also very conscientious of hand placement. I don’t even remember a handshake. Seems like he learned his lesson— do not touch young women. Anything ring a Bell?

The anti-politics politician was nowhere to be found. We think the address that we scored from confidential sources was incorrect. No surprise that Mr. Ferner keeps this kind of information as private as possible.