There is no building in Toledo quite like Pythian Castle. A beautiful Romanesque structure at the intersection of Jefferson and Ontario, it is one of the only towers built in the late 19th century still standing in downtown Toledo. Its black steeple and spires, looming over 100 feet from the ground, symbolize our city’s prosperous past– while simultaneously reminding us of our precarious present.

Its original owners, a secret society known as the Knights of Pythias, sold the building to Greyhound in 1951. It was placed on the National Register of Historic Places in 1972 and has stood vacant since 1974, enduring decades of neglect and weather damage. With each passing year, the cost of renovation went up while the chances of its preservation went down. 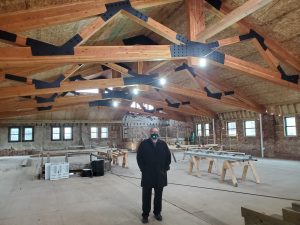 Enter David Ball. A Toledo native and Bowsher graduate, Ball is a serial entrepreneur who runs STS Property & Facility Management with his brother Dean. An experienced developer, Ball has worked on over a dozen major buildings downtown since 1985, when he first fell in love with Pythian Castle. Following Greyhound’s relocation to Dr. Martin Luther King, Jr. Plaza in 2016 and the Lucas County Land Bank’s subsequent acquisition of the property, Ball finally got his chance – but it turned out to be more than he bargained for.

“People said it was impossible.”
To begin with, the building’s interior was in shambles. The roof had caved in long before, leaving it exposed to the elements. Years of rain and snow piling on gradually caused all five floors to collapse into the basement.

While clearing out the debris this left, it was discovered that the iconic steeple off the intersection of Jefferson and N. Ontario was unstable, causing work to be stopped for eight months while a 4000-pound support bridge could be constructed and installed. 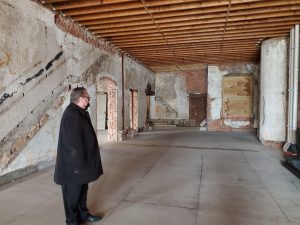 With the steeple stabilized, work began on constructing new floors from the ground up so that a new roof could be safely built. However, it was discovered that the mortar in some of the brick walls had deteriorated over the years and couldn’t carry the weight of the new floors. This added another seven month delay while the walls were replaced, brick by brick.

Undeterred by the outbreak of COVID-19, work has continued at a steady pace since then and is nearly complete. Modernizations and improvements to the original structure include an entirely new roof and new windows; a new, modern elevator replacing three broken units; a new stairwell replacing a series of unsightly fire escapes along the building’s exterior wall; a series of internal downspouts for distributed rainwater, replacing a system of exterior gutters; and new fiberglass replacements for the building’s exterior details. 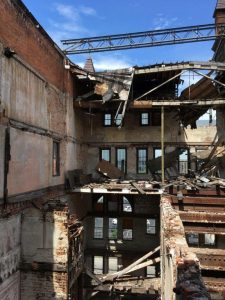 “Nobody thought we could pull this off.”
Shielded from the elements for the first time in decades, the castle’s preservation is a testament to the vision and heart of David Ball and STS properties. “I fell in love with the building as a young guy coming to do real estate downtown,” Ball said. “There is nothing like it in this city. To have it removed from our skyline would have been a real loss.”

Pythian Castle is a comeback story for the ages, one that should inspire hope in every Toledoan. Once a somber symbol of decline and disinvestment, the building now stands tall and proud, ready for use again. It’s character and personality— nearly condemned to live on only in photographs— are now preserved for Toledo’s next era of prosperity.