Fat Tuesday is a special time for this Louisiana girl, and I have to admit that I’ve been a little sad being away from home where all the donut shops in town are making king cakes filled with cream cheese, baked with buttery cinnamon-brushed dough, and topped with green, gold, and purple sugar, each with a little plastic baby hidden inside to signify the three kings’ visit to Jesus. Epiphany. It signifies the beginning of carnival time and the decadence intensifying to a fever pitch on Fat Tuesday (Mardi Gras), when (if you do it right), you indulge like you won’t get a chance until Lent ends.

When I received word that king cakes aren’t the only confectionary wonder to be enjoyed on Fat Tuesday, I knew that I had to try them. Pączkis? How do you say it? What are they? Where can I get my hands on some?

We visited Sautter’s Market to try theirs, which are rumored to be some of the best in town. Jim and David Sautter took us back to the bakery where we got a behind-the-scenes look— and a little history— about what some might call a Polish donut. 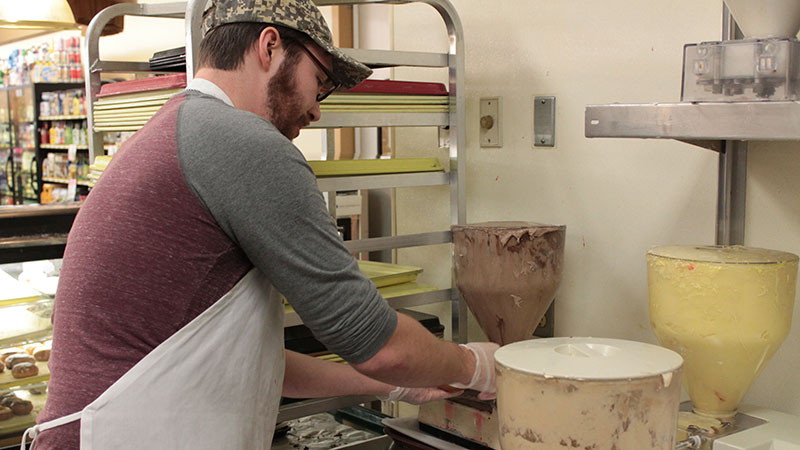 Jim explains how the tradition developed in Polish communities: “The day after Fat Tuesday is Ash Wednesday when people give things up,” he says. “The tradition was that the Polish people would take anything in their house that could be made into something sweet, put that together before Fat Tuesday, and make it part of their last hurrah before giving up sweets.”

A pączki is a little different from a traditional donut, as it’s a solid piece of dough filled with any number of fillings and dusted with sugar. The dough is often made a little differently than that of donuts, resulting in a fluffier rise.

Jim can remember when the pączki craze first began in Northwest Ohio. It spread from Hamtramck, a Polish community in Detroit that had people lining up outside little bakeries on Pączki Day, hoping to get a helping of the traditional indulgence. Jim’s son, David, can remember making them in the bakery as a child, with powdered sugar dusting the prep space like snow. 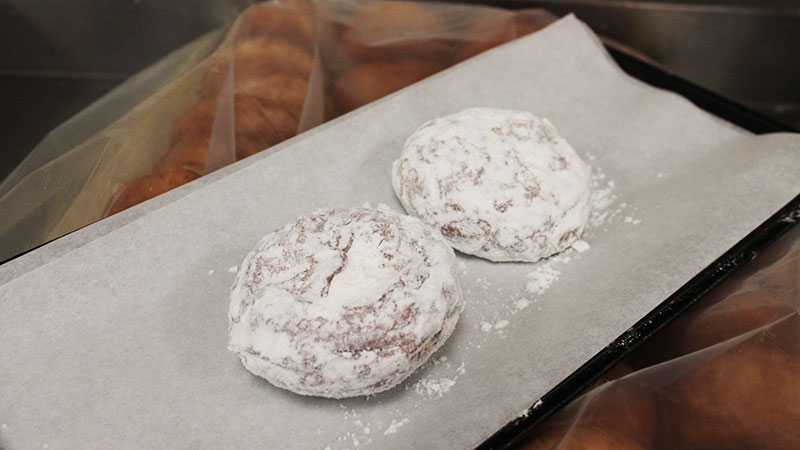 Sautter’s sold about 16,000 pączki (the plural of pączki is pączki, as Bob Sautter explained to us) last year, which is not unusual for them. The demand is high as late as the evening of Fat Tuesday, when people getting off work want to pick some up before they’re sold out. Sautter’s actually has a pączki crew to make sure a steady (and fresh) supply is ready.

“We have a crew in all night,” says Jim. “We can barely keep up with the demand.”

After taking a tour of their bakery, oohing and ahhing over every sweet thing we saw, we got to try a lemon filled pączki and the Triple Bypass, a very popular option filled with Bavarian cream, peanut butter, and chocolate. It was everything I imagined it would be, a fresh, made-to-order pączki with generous amounts of powdered sugar that ended up all over our faces and clothes. We didn’t mind. It was worth it.

“We give each one tender loving care,” Jim says. “You’re not going to get a stale one. We let the dough rise up and serve them while they’re still moist. They’re almost too easy to eat.”