Jason Finn faces the hurdles of a sudden injury

A freak accident changed the lives of Jason Finn and Jeni Belt forever.

During the couple’s vacation to Puerto Rico, and only a few days after Finn’s 47th birthday, both their future plans and current life were destroyed in an instant.

Finn doesn’t really remember what happened— memories of the instant are patched together through stories from helpful strangers who saved his life— but friends and family have theorized the incident: A strong wave knocked Finn off of his boogie board, slamming his body against the ocean floor, breaking his neck and knocking him unconscious in the process.

On the beach, Marty Formariz Escanellas, a native Puerto Rican, saw Finn’s lifeless body floating in the water. After Escanellas rescued Finn, he summoned the help of another stranger to perform CPR.

“Our life, as we knew it, was decimated in an instant, so we’re still in shock from that,” Belt explains. “The people who we were are gone. I look at pictures from before the accident and think, ‘We aren’t those people anymore.’”

After the rescue, Finn went to a Puerto Rican hospital. Doctors did not immediately realize Finn had a broken neck or spinal cord injury, but they eventually performed surgery in an attempt to stabilize the spine and prevent further injury.

Since then, the couple’s lives have been a whirlwind of rehabilitation and drastic life changes in order to accommodate Finn’s C5 spinal cord injury. He is paralyzed from the chest down with limited movement in his left arm, which leaves him confined to a motorized wheelchair. 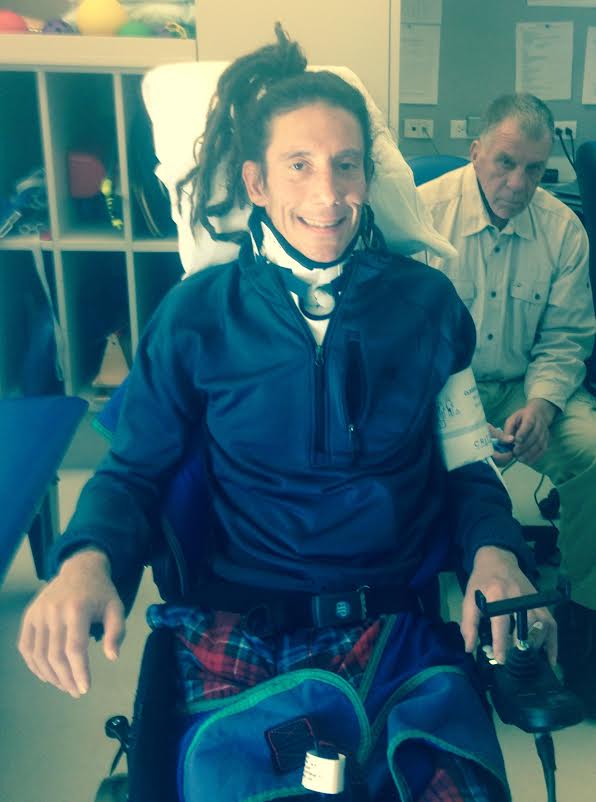 Northwest Ohio has limited resources for those suffering from spinal cord injuries (SCI). The nearest SCI rehabilitation center is at University of Michigan— the next closest is Walk the Line in Southfield, Michigan. Finn and Belt chose to work with the latter, even though it’s a three-hour round-trip drive, because they do not follow the rules of traditional rehab.

“Walk the Line was started by a woman who has a C6 spinal cord injury,” Belt elaborates. “All her doctors said, ‘That’s all we can do for you. You won’t regain any additional movement.’ She believed that if you work on the whole body you can find opportunities for sensations using weight-bearing exercises. Now, even though she has a C6 injury, she is in a manual chair with trunk control and transfer ability.”

However, therapy is expensive. Finn has both private insurance and Medicaid, yet insurance only covered his initial seven weeks of rehabilitation. “Basically insurance said, ‘He’s not demonstrating improvement, so essentially it’s not worth it to cover more [rehabilitation],’” Belt says.

Despite the ongoing struggle, Finn and Belt feel agree that the community response to their misfortune has been overwhelmingly positive. Finn likens his community to building an Amish barn building: “The community has really come together…I have friends I didn’t even know I had. They all came together and basically built our house to make it possible for me to live here.” Finn laughs, “It makes me feel like the luckiest quadriplegic in the world!”

“Good friends, family, and strangers donated hours and hours of labor and material to get us home,” Belt adds.

Yet Finn and Belt have aspirations for the future. Finn is anxious to start his rehabilitation with the hopes of regaining some motion. “I hate being a burden to everyone. I have to ask someone to pull my hair back or get a bug off of my nose,” he says. “I would love to get my two arms working and my wrist and fingers. That would change the world. Legs would just be an incredible bonus on top of that. Just having fingers on one hand working would be amazing. Basically I need to just have more functionality so I’m not so needy.”

“The love that we have for each other is very life affirming. There’s a light in Jason’s eyes and I believe we have good things to come,” Belt adds. “He has a stubborn, strong will, a unique perspective and a lot of love. We‘re going to do everything we can to achieve maximum recovery, whatever that may be.”

For those who would like to donate, or to see more details concerning upcoming fundraisers– including FinnFest– please visit HelpHOPELive.