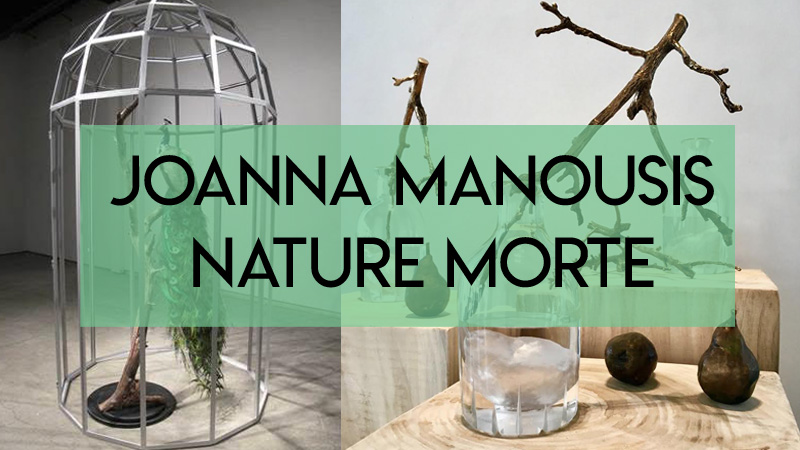 In Nature Morte, on view until June 17 at River House Arts in Toledo, British-born artist Joanna Manousis holds up a mirror to our collective soul, inviting us to meditate on nature, memory, time and our place in the world and in the cosmos.

Self-reflection, both literal and figurative, is a recurring theme in this elegant and austere collection of objects and installations, featuring blown and cast glass in combination with mirrors, cast bronze, steel, and even taxidermy. This is the artist’s largest exhibition to date and includes pieces made during her residencies at The Toledo Museum of Art in January, 2017 and Alfred University in March, 2017.

While Manousis has a natural affinity for glass as a medium and masterful control of its technical requirements, her work depends, for its resonance, on a well-conceived intellectual foundation. She allows her ideas to dictate form, material and fabrication; the result is a visually arresting and varied body of work supporting a strong cerebral through-line.

Ideas of Domesticity, Femininity and Consumption

“The work I am producing touches on ideas of domesticity, femininity and consumption but in a less obvious literary manner that at times draws upon the two-dimensional skills I acquired within my earlier fine art background,” she explains in her artist’s statement.

Veil, a large baroque-style mirror obscured by exquisite glass lace, is typical of Manousis’s approach, combining the easy visual pleasures of art glass with rigorous underlying content. The lace, its fabrication a technical tour-de-force in itself and referencing an 18th century Dutch bridal veil, recalls for the artist her frequent weekly shopping trips as a child with her grandmother to a lace shop.

Mirrored surfaces are a common recurring feature of the artist’s work. In Reaching an Ulterior Realm , which features trompe l’oeil replicas of mylar balloons and bronze arrows, the artist reflects literally and humorously on the human habit of aiming for some shiny object of desire, only to find it deflated upon impact.

Perhaps the most imposing artwork in the exhibit, Fertile Ground II, is a monumental and rather modern-looking wardian case, within which a large stuffed peacock is either sheltered or confined. Lush color complements the extravagant feathered iridescence of the bird. As if his intrinsic splendor weren’t enough, his ostentatious plumage is bedazzled by an intricate floral necklace.

Two large circular installations in Nature Morte are examples of an abiding compositional theme in Manousis’s work and reference the rose windows of cathedrals. (A third in the series, entitled Selene and produced during Manousis’s recent residency in the glass studios at the Toledo Museum of Art, will be on display in the gallery later this summer.)

Indra’s Web visualizes a Hindu/Buddhist story describing gems in a vast, inter-connected cosmological web, each gem reflecting all the others so that the process of reflection is itself infinite. In Figs and Urns, the mirrored image of each golden fig rests inside a transparent urn, birth and death represented in an unending cycle.

Distilled Portraits, three of which are on display in Nature Morte, reflect Manousis’s interest in femininity and the domestic arts and represent individuals important to her. One of them, the translucent image of pickled pigs feet cast in glass, again references Manousis’s grandmother, who, she says, “pickled everything”. The other two pieces in the grouping are ghostly representations of oysters and wooden spools. While they appear to be common pickling jars, they are, in fact, solid cast German optical glass.

In another corner of the gallery, a small and lovely installation entitled Bottled Pears is the standout of the show.

These poetic evocations of pears grown in bottles, a popular practice from the Alsace region in France, are also a poignant meditation on time and decay. The memory of the pear is forever preserved within the glass bottle, while the bronze pears with their dark patina suggest the decayed surface of a spoiled fruit.

The recent work by Joanna Manousis in Nature Morte easily supports her reputation as a virtuosic master in glass. But more importantly, it requires that we also acknowledge her as a powerful conceptualist working in a difficult but rewarding medium.

In June of 2017, Joanna Manousis’s work will be showcased in Young Glass, a major international competition and exhibition at the Glasmuseet Ebeltoft in Denmark and in August, she will have a piece included in the British Glass Biennale.

She’s been featured in nearly a dozen publications including American Art Collector, Glass Quarterly, and New Glass Review, and has worked, studied and taught in Australia, Japan, the United Kingdom.