There’s a depth and history to barrel-aged beers and it comes as no surprise that Nicholas Scott, owner of Wild Side Brewing Company, chose downtown Grand Rapids, a place with a lot of history, as the future location, of his taproom, which will open April 15.

Wild Side, which Scott characterizes as an American farmhouse style brewery, focuses entirely on barrel-aged brews. From barrels that held spirits to barrels that held wine, the aging vessels add depth and complexity to Scott’s beers.

“I’m not much of a businessman,” Scott said. “This was more of an art project. Barrel-aged beers, particularly wild ales, are my favorite styles of beer and no one in the area was doing them. What’s difficult with this style is that these beers don’t adhere to a schedule. I can’t control when these beers are going to be ready.”

What exactly is a Wild Ale?

Wild ales derive from beers that are introduced to wild yeast or bacteria from oak barrels or other sour mash techniques. Where bourbon barrels and rum barrels often add characteristics of oak, vanilla or caramel to beers, wild ales often have acidic, tart or sour characteristics. Because wild ales utilize wild yeast strains and bacteria, they can be somewhat unpredictable. 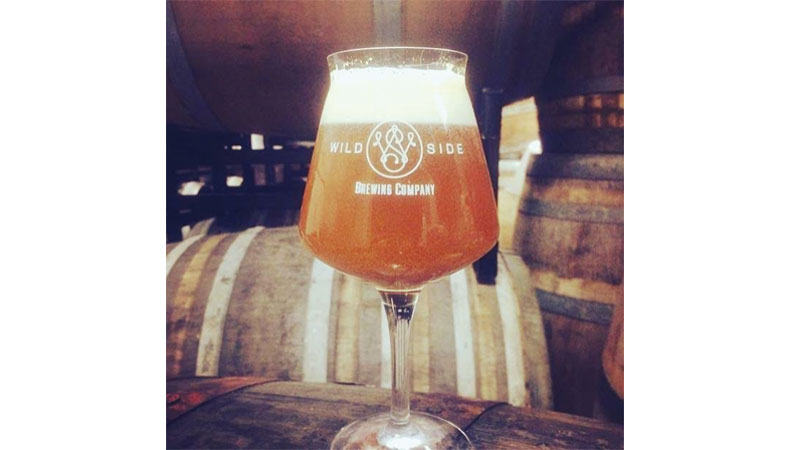 From memberships to a taproom

Instead of releasing bottles through retail stores or opening a taproom, Wild Side Brewing Company’s brewery opted to create a membership program, Syndicate. This allows the brewers to hone their craft while gaining a reputation within the beer community for producing high quality, barrel-aged beers. Following early success and the resultant momentum, Wild Side made plans to expand the membership program and create a taproom. Scott sees downtown Grand Rapids as the ideal location.

“Beyond my fishing addiction, the town itself is truly beautiful and has character that they unfortunately are not making more of these days,” Scott said. “I hope to use beer and the town as a way to both make and tell stories of who and what we are. My beer is all about a sense of time and place, and Grand Rapids, Ohio is the perfect bedrock for that.”

Wild Side Brewing Company’s taproom will add to the burgeoning beer scene in the greater Toledo area, which includes Maumee Bay Brewing Company, Earnest Brew Works, Black Cloister Brewing Company, Black Frog Brewing and Great Black Swamp Brewing Company. According to Scott, his brewery will complement these breweries well. “I do very small batch and single barrel beers that live and breath the belief of quality over quantity,” he said. “I am only trying to carve out my time and place. Whether it’s good or bad, this is my singular vision and representation of what I think beer, and just as important, the experience of drinking beer should be.”

Carving out a niche in the community

So far, the response from the beer community indicates that Wild Side Brewing Company’s approach is working. Wild Side’s beers have made it to retail outlets over the past year, selling out extremely quickly. With the opening of the taproom this month, Scott hopes that trend continues.

“My hope is to build a group comprised of craft beer aficionados, seekers and collectors that I can meet with and share not only beer, but my ambitions for the brewery so I can use their collective wisdom and appreciation for this craft to help guide the future of Wild Side.”