Tucked into an interior hallway of the Ottawa Hills shopping center, rarely seen now with the popularity of strip malls, Plat 8’s location is a comfortable getaway, reminiscent of those we used to be familiar with at Rocky’s original location, or the Vineyard, now gone, at the old Westgate Shopping Center. The interior has that familiar DIY shiplap look wallcovering lighting that’s warm and inviting. The foods, in both variety and preparation, tempt the palate as straightforward, honest and satisfying.

The place is relatively small, one could say cozy, with seats at the bar which is surrounded by a few high top tables. The dining room, open and adjacent to the bar area, has tables with seating for two or four, including some that line the walls affording bench seating options.

The staff, a casual well-trained and efficient group, wearing Plat 8 logo shirts, are friendly and continually scurrying about while we were there. The name of the restaurant, an amorphous reference to Ottawa Hills real estate, has been discussed often in other reviews, but we will avoid rehashing it here. The moniker is relatively easily remembered, even if you’re not sure exactly where it came from. Suffice it to say, this is the “corner bar and grill” for the Ottawa Hills crowd.

When we arrived, sans reservations, we were told there would be a wait for a table despite what appeared to be plenty of empty tables. Shortly, the tables filled with those that found reservations to be de rigueur. After waiting briefly at about 6 p.m. on a Friday evening, we were seated. By around 8pm, ll the tables turned over while a steady parade of customers continued to come through the door. It is the kind of place where you know someone or, feel that you should.

The bar is replete with the expected and expanded bourbon selections along with other bottles of spirits and liqueurs displayed proudly. An ample wine selection is offered by the glass or bottle, including house labelled vintages, bottled in Italy, in the cabernet, merlot, chardonnay and pinot grigio varieties. The house cabernet, ordered at our table to accompany the meal, is quite good. 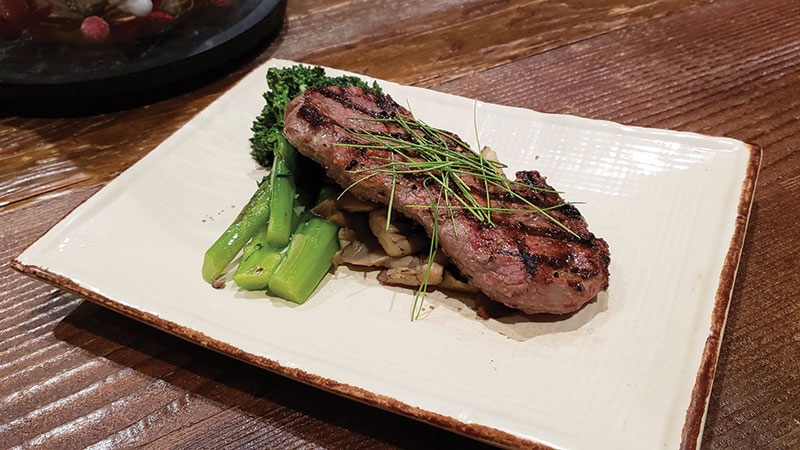 Friendly and inviting, the menu includes appetizers ($8 and up) ranging from a charcuterie board to a variety of non-traditional offerings including fried green tomatoes, candied sweet potatoes tossed with feta and toasted pistachios, brussel sprouts with pancetta and parmesan, as well as eggplant Napoleon and chicken drummies. Sandwiches ($12 to $13), referred to here as handhelds, include burgers and a Club, BLT, or Italian influenced grinder. Salads, a variety of greens or lettuce with protein options and other enhancements, run from $10 to $16. Entrees range in price from $17 to $34 and include steaks (hand cut in house) along with several fish (Salmon and Walleye) and shrimp dishes as well as some comfort food, like veal meatloaf, and even reached to include Rabbit Carbonara and several vegetarian offerings.

Desserts, like the other portions of the menu, include several more substantial offerings, like Carrot or Chocolate Mousse cake, as well as lighter nibbles like French macarons.
The place invites conversation, evidenced by the clatter and chatter which continued unabated around us. There is a feeling of being in repose, taking a moment away, enhanced by warm hospitality and good food.