Dually’s Gastro Pub is one of those overlooked places, stashed in industrialized north
Toledo, but it’s worth a trip to sample the pub fare, sip on seasonal craft brews and meet some good, local folks.

Rachel Lovette, owner of Dually’s, embraces an air of friendliness at the restaurant/pub that starts with her and extends to her staff and their customers. A hub for regulars, everyone is friendly and chatty, something that Lovette cultivates. “90 percent of my customers, I just want to hug,” she says, happily.

Dually’s, named as the restaurant is a means of funding her two daughters’ futures, has been open since June 2016, but in that short time, the eatery, down the street from Whitmer High School has become the de facto hangout for the adult post-football game crowd.

“I started off as a server years ago at Sardini’s (and Sons) and Friendly’s and then I was a bartender up and down Alexis and Laskey,” explains Lovette of her past. “I fell into an incredible deal here, I was able to buy all the equipment and the license. I couldn’t turn it down.”

Dually’s takes care of you in the appetizer game, offering up classic fried options such as onion rings, green pepper rings, pickles and loaded fries, along with innovations such as sriracha nachos and crab-stuffed mushrooms. The fried pickles and french fries are cut into spears here, emphasizing the taste of the veggie or tuber not the cooking oil. And for lovers of seafood, the crab-stuffed mushrooms, blanketed in melted cheese, are a fantastic way to begin a meal. 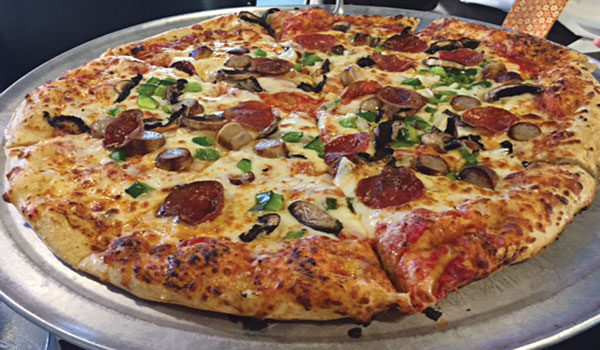 There is a lot to pick from here (pizza, steaks, burgers, fish tacos, chicken chunks, salads, etc.), but the 16” Works pizza with its handcut toppings is highly recommended. “I don’t like to go to a place where they have just one thing on the menu,” Lovette says of her menu’s variety. The highlight of Dually’s offerings is the mac and cheese, in several variations , from a classic cavatappi and house-made sauce to an alfredo with chicken. The chicken alfredo mac is one of those dishes where you look down and realize you ate the whole thing.
Dually’s could prove dangerous for the health-conscious with the Dually’s deuce, a BLT that delivers you, literally, a pound of bacon along with the lettuce and

tomato. “I created that one for my other half; he loves bacon,” Lovette explains. 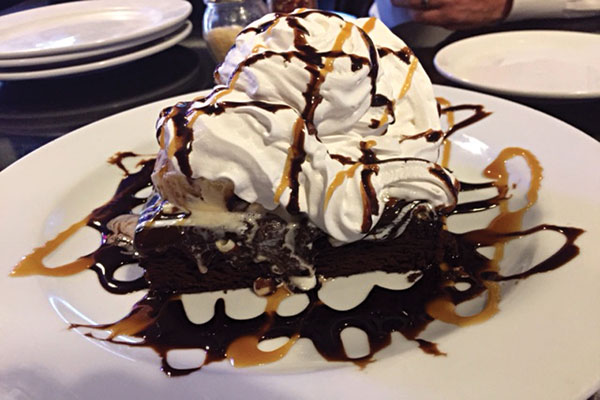 Dually’s has a few different dessert options, but our waitress, Hillary, insisted we try the brownie, which isn’t actually on the menu yet (they have a new menu coming). “It’s my favorite,” Hillary said, promising it was big enough for even the heartiest sweet tooth. She wasn’t kidding— a massive square of gooey, moist chocolate arrived topped high with whipped cream with caramel and chocolate syrups drizzled atop. It is the Mount Everest of desserts— don’t try and summit it alone, bring your friends.

There’s a lot to enjoy about Dually’s. While a lot of selections were sampled on our visit, this place requires a few trips to properly explore the menu (the Fungi burger is excellent, Hillary promises). And a plentiful selection of cold beers and cocktails to enjoy while doing it.