It’s Wednesday, July 27 and Donald J. Trump is in town. Jefferson Avenue is swarming with adoring supporters, curious bystanders and angry protesters. But across the street from the Huntington Center— where perhaps the most divisive man in contemporary U.S. politics will speak— One Lake Erie Center is calm and nearly empty. Artists walk in and out, some carrying canvases, others with sculptures, jugs containing contaminated water from Flint, desk chairs from Ypsilanti classrooms, TV screens and broken glass.

As the crowds for the political event swell, the artists continue to work, ignoring the surrounding circus, with only five days remaining to convert the 17,000 sq. foot space into a gallery for the group exhibition Re: Formation, on view throughout August.

The dual-site exhibit is presented by the Gallery Project, an Ann Arbor-based curatorial team led by Gloria Pritschet and Rocco DePietro, a duo who founded ‘gallery of ideas’ in 2005. Since then, they have curated shows at sites in the Ann Arbor and Detroit area. 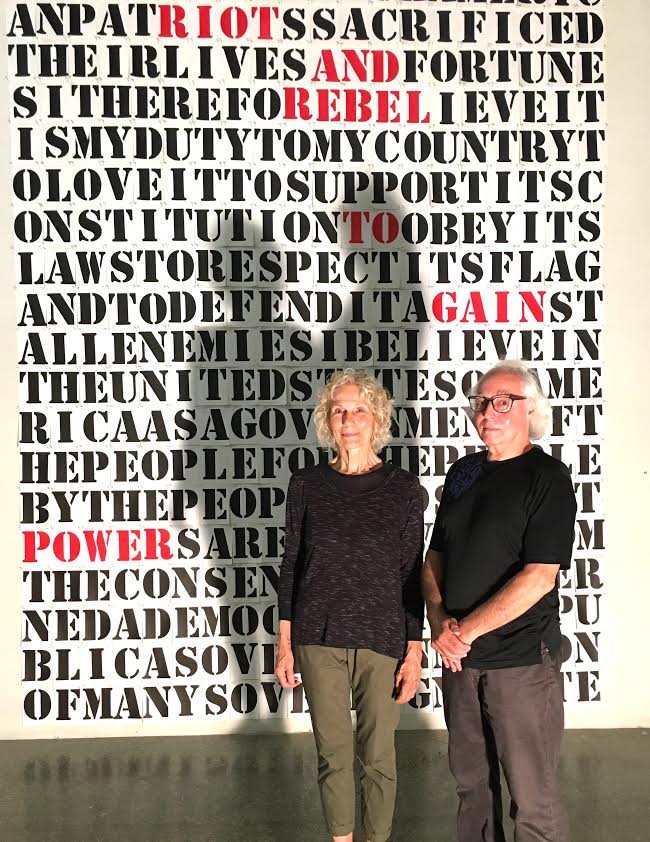 Last August, the Gallery Project came to Toledo for the group exhibit WISH LIST. Re: Formation will stay on view in Toledo for one month before traveling to the Ann Arbor Art Center for another month of exhibition. Despite structural similarities, the two have very different tones.

For WISH LIST, artists made works enacting human desire, but Re: Formation withholds that sense of yearning. Instead, Re: Formation gives nearly 60 regional and local artists space to express anger and frustration through art.

Works in the show, in various mediums, are thematically tied to perceived injustice and politically charged subjects, confronting socio-political events, like police shootings of the unarmed and the ongoing Flint water debacle.

“People who have been silent are now standing up,” explains co-curator Gloria Pritschet. “There is a different attitude, more confrontational, we found in the work immediately.”

“There is a sense of mobilization, of movement, of pushback,” says co-curator Rocco DePietro. “We don’t want to just complain about the problems, we want to showcase those who are doing something.”

One of the artists who are “doing something" is Shanna Merola, a digital collage artist, who has worked with her art in cities, like Flint, to help interaction between community members and local police. Work from her series as a response to the Flint water crisis, appear in Re: Formation. 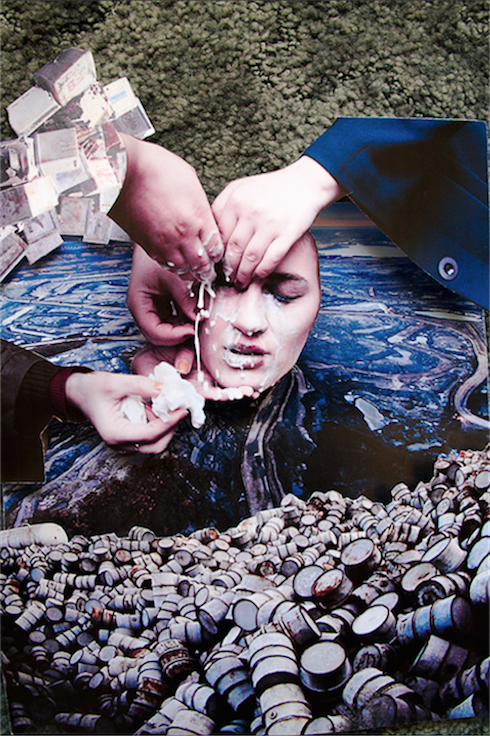 The photo, taken last summer, was in direct response to the Charleston church shooting and the debates that followed regarding display of the flag on state owned property.

“The ‘progress’ has to do with the confederate flag burning,” says Azzaro. “It’s all about progress in terms of doing away with this past— that some Americans still want to hold onto — that represents a pretty awful thing.”

Azzaro’s installation, ‘Sticks & Stones’, also on view, reacts to racist, vile and aggressive online comments about his town by covering a child-like figure sitting at a school desk with the anonymous attacks. “There is a sense of negativity… and this is a tangible way to represent it. It robs the kids of their innocence.” 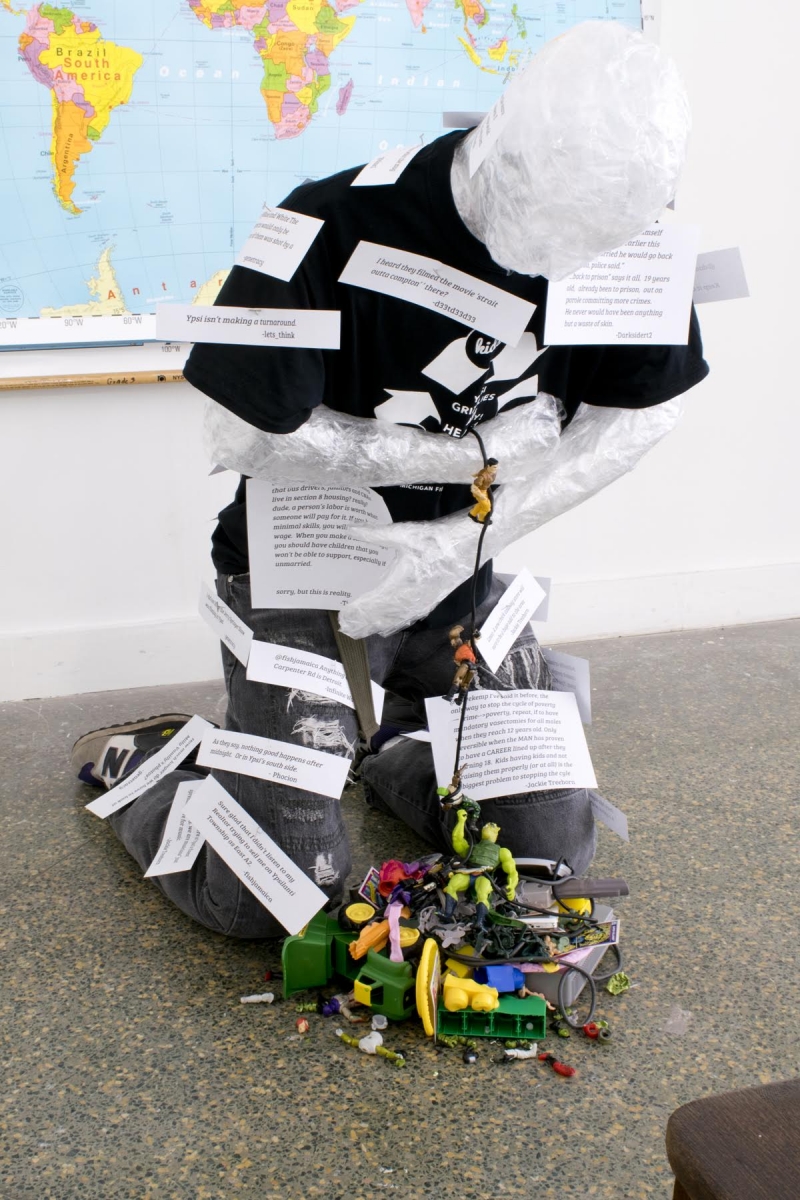 A photograph of Frederick Douglass stretches across the back wall— at 15’ x 12’, it holds as an anchor. Hung upside down, the portrait of the social and civil rights reformer and abolitionist is stern and striking. 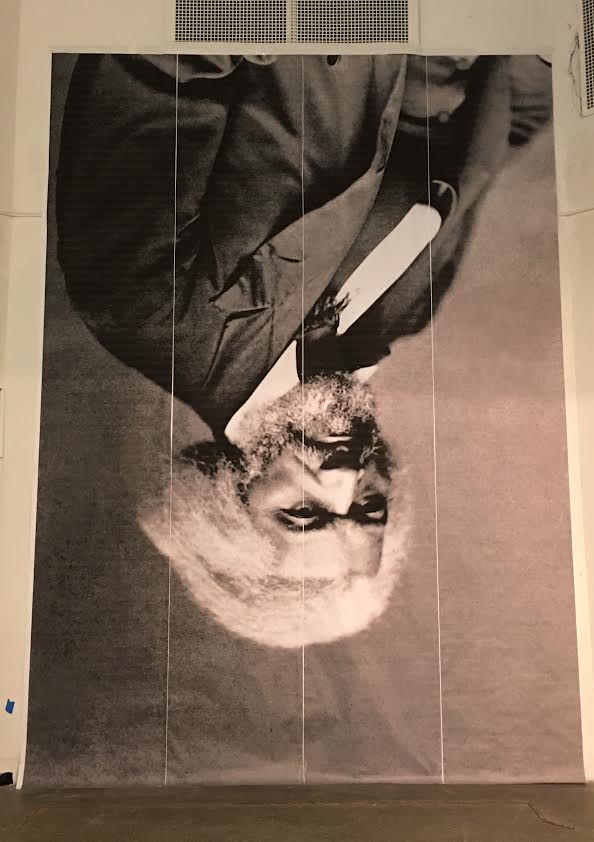 “It’s a distress call,” explains Toledo artist Yusuf Lateef, who installed the work, titled 'The Reconditioning'. Lateef explains the work is based on Douglass’s infamous 1852 Fourth of July Speech, the black statesman telling a crowd of white men that “This Fourth of July is yours, not mine. You may rejoice, I must mourn.”

“He spoke on behalf of the slaves when slavery was still legal,” explains Lateef. “He spoke about the Constitution, the forefathers and how the pursuit of happiness would have to apply to slaves if it was ever going to really be achieved.”

“My hope is that the work redirects our thoughts and how we look at history in the context of the present and ourselves,” says Lateef. “Slavery happened so long ago, that no one alive now was a slaveowner— but my great-grandmother was a slave.”

The significance of Douglass’ portrait is strengthened by his place as a historical icon. During the 19th century, Douglass made himself a most photographed African American man.

“He wanted to provide the right perception of the African American,” explains Lateef. “He looks very serious … This photo is very distinguished.”

Douglass appears in formal clothing— decimating the more familiar image at the time of an African American as a slave. Now, issues of representation persist. The image of a young, black male is often tied to crime and violence, creating a dehumanizing and socially isolating experience, which serves as the subject of Lateef’s opening night performance piece. In a series of white stalls, plastered with photo collages of young black males, Lateef, and three collaborators, will welcome visitors as Douglass’s Fourth of July speech is recited.

“It will be very personal. We will be waiting, telling guests that we aren’t their enemy. They will be able to soak it all in, and it will be very intense for us,” says Kevin Gilmore Jr., another artist involved in the performance. Gilmore and Lateef will also be joined by artists Darren Mac and James Dickerson.

Gilmore worked with Lateef less than a year ago, performing this work at The Clazel in Bowling Green. Gilmore, also known as DaveKevinAdam, is a member of the tightly-knit group of local visual artists, rappers and writers called Black Market Rx, their name a jab at the privatization of healthcare, offering art as their solution.

“Our view on healing is more holistic,” explains Chris Rogers, aka Blk Giraffe, another member of the collective. “We want to help ourselves, and the listener, by combining music and art to create something therapeutic.”

“Different medias bring different energies out of me,” says member Charles Stoop, aka Marcus Whittington-Clark. “My photography is direct, and my writing is vague and subtle, but the emotion is there.”

Reform and another exhibit

Close to Re: Formation, another exhibit exploring the socio-politics of identity is on view at River House Arts.

Midwesterner Ben Schonberger will present his artist book, ‘Beautiful Pig’, a collection of photographs and ephemera from the life of Marty Gaynor, a retired Jewish police officer from Detroit, offering the first opportunity for the public to see the book on full display. 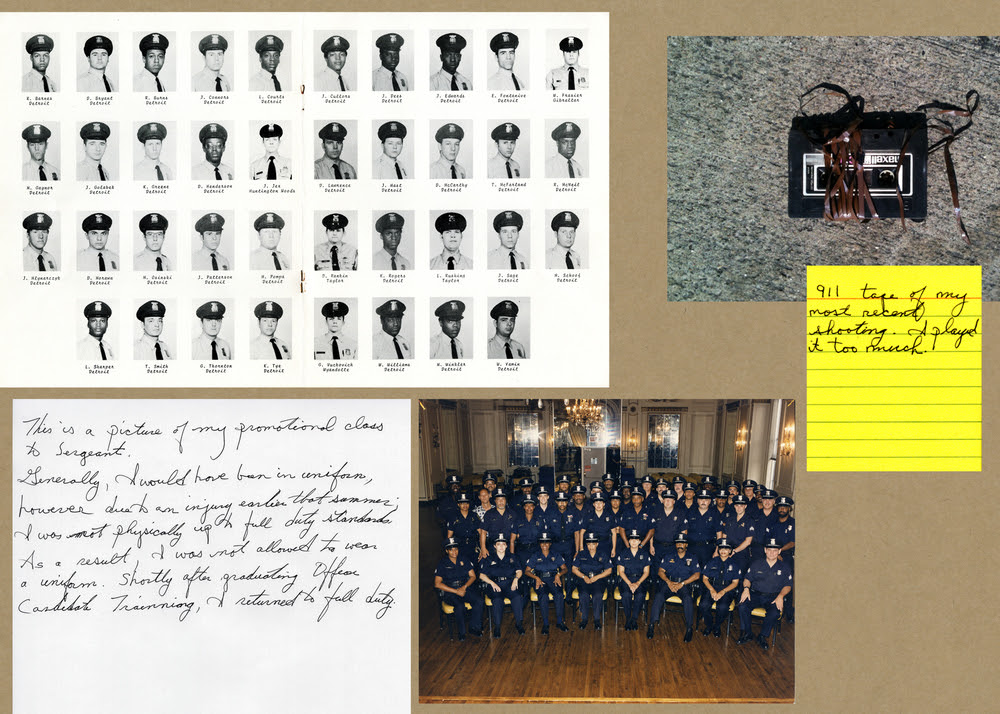 The artist, after meeting Gaynor, worked with him side by side, to understand the unique experience Gaynor had as a minority officer policing another minority community.

“Jews in Detroit aren’t supposed to be cops. We don’t exist. That’s just the way it was,” said Gaynor, whose expansive collection of photos tells a fascinating story about identity.

But ‘Beautiful Pig’ is meant to be more than a retelling. Schonberger tells a story about identity through Gaynor’s experience: “My first goal was finding a way to become the owner of these… I had to disrupt the context… but I was always really aware that I had a responsibility to represent this work in a way that allows for conversation.”

“As soon as I put myself in [Gaynor’s materials] and started telling a different story,” says Schonberger. “It changed the physical context, for not only what the photographs were, but also how the photographs are being interpreted now. I changed the meaning. I took his evidence and made it about identity.”

In a tense socio-political climate, many local and regional artists react. Whether despondent or ignoring the current state of the realm, actions can be impactful.

Some artists take time to meditate on the issues— like Schonberger, who researches identity in an effort to humanize the role of police officers in society. Some directly confront broad issues of representation— like Lateef, who uses performance art to subvert stereotyped images of black men, or Azzaro, who uses installation to discredit anonymous negativity towards his town. And others use the visibility of the art object to bring awareness to unseen problems—  like Mark Bleshenski, from Bay City, MI, who brought over 60 jugs of contaminated water from Flint for his installation titled ‘Plumbum.”

Despite anger, fear and frustration, co-curator Gloria Pritschet remains hopeful, saying, “I still hold this optimism…  I think we couldn’t do an exhibit like this without it. More people are pushing back. They’re standing up.”

Re: Formation's Opening Receipting is on Friday, August 5 from 5-9pm. Enjoy live music from DJ Nathan Mattimoe and nosh on snacks from Grumpy’s. Meet the artists and see ‘The Reconditioning’ performance.

See more of the Black Market Rx during the Black Market Fest
The showcase of the art and music will feature three DJs, four gallery artists and five performance.
2pm-midnight, on Saturday, August 13.
The Farm (151 S. St. Clair). $7. 914-886-5174. See the event on Facebook .

Ben Schonberger will be a resident artist at the Toledo Museum of Art (August 8-12) in the Glass Artist Pavilion Project (GAPP) program.
He will give a free lecture at 7pm on Friday, August 12 at the TMA's Glass Pavilion.
The opening reception for‘Beautiful Pig’ will be held from 8-10pn on Friday, August 12. On view through September 8.
River House Arts, 425 Jefferson Ave. | 419-441-4025 | River-house-arts.com 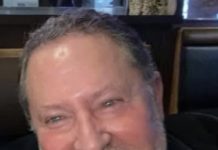 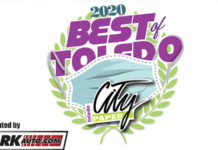 A Look Back: Focus on some of 2020’s Best of Toledo winners 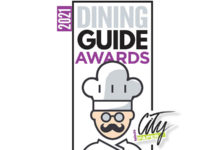 2021 Toledo Dining Guide. See the results in the September Issue!