Those familiar with efforts to provide fair access to affordable housing know of Toledo’s Fair Housing Center. Founded in 1975, shortly after the Fair Housing Act of 1968 became law, the Center is one of the oldest in the country. It was Toledo FHC Founding Executive Director Shanna L. Smith who led the groundbreaking case establishing that sexual harrassment by landlords be recognized as a form of housing discrimination.

Marie Flannery, the new president and CEO of The Fair Housing Center, said that Smith was one of the instructors when Flannery attended NFHA’s Fair Housing School in 2013. “She was and is a pioneer,” Flannery said. “I don’t know if people in Toledo realize the history that’s here, how lawsuits and cases brought by the Fair Housing Center have changed the face of fair housing nationwide. It really was an honor and a privilege, given the history, to have been selected for this position.”

In addition to her appreciation for Toledo’s early role in shaping the cause of fair housing regulations, Flannery has always felt most at home in the Midwest. When she began her search for a new position, she looked to find a position in this region. Toledo City Paper sat down with Flannery to talk about the organization’s mission and what she sees for the future of Toledo area housing opportunities. Flannery filled us in about what she loves about Northwest Ohio’s culture, Toledo’s strengths, and how necessary it is to continue fighting against housing discrimination. 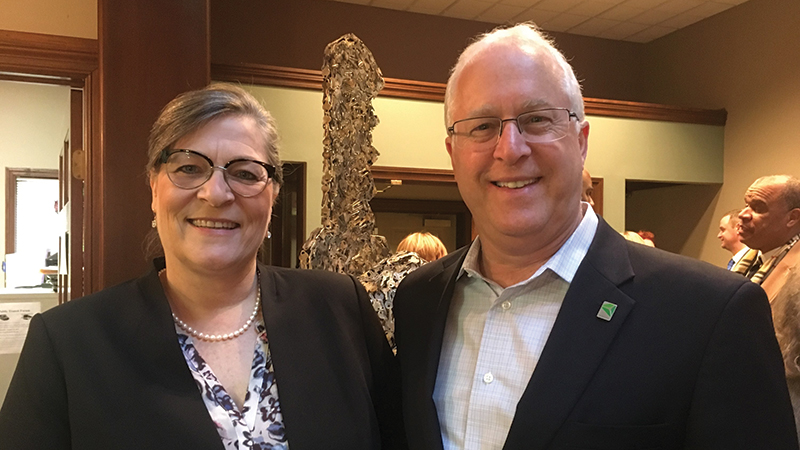 Marie Flannery and Board Chair Alan Sattler at the Fair Housing Center’s open house in January.

When did you move to Toledo and from where?
Since June of 2012, I had been living in Southern California in what’s known as the Inland Empire [the Riverside-San Bernardino-Ontario area], and was working at a fair housing agency there. Prior to that, I had lived in the Midwest for most of my adult life, so I was actively trying to get back to the Midwest.

What is your impression of this area of the country?
I’m really a Midwesterner in my soul. I fell in love with the Midwest right away. It just felt so real and down-to-earth. I think you don’t appreciate something until it’s gone. I moved back to California and my parents were there, and my sister was there, but 116 degrees is just too hot. Plus it’s really expensive. We purchased a home here [in Toledo], and— our mortgage, taxes, insurance and everything— is less than half of what our rent was there. In general, the Midwest is just affordable.

Breakdown what The Fair Housing Center does for Toledo and your role as the President and CEO.
Our primary mission is the elimination of housing discrimination. Part of that is also facilitating the creation of inclusive opportunities for people, particularly those that have protected status under the Fair Housing Act. Whether that means they want to stay here in Toledo or move to a different neighborhood, it’s eliminating the barriers that could keep them from being able to do that.

My role is to make sure that the agency is true to its overall mission, to assist and provide guidance, investigations, educational opportunities and to work on a local level with partners whose missions align with ours. 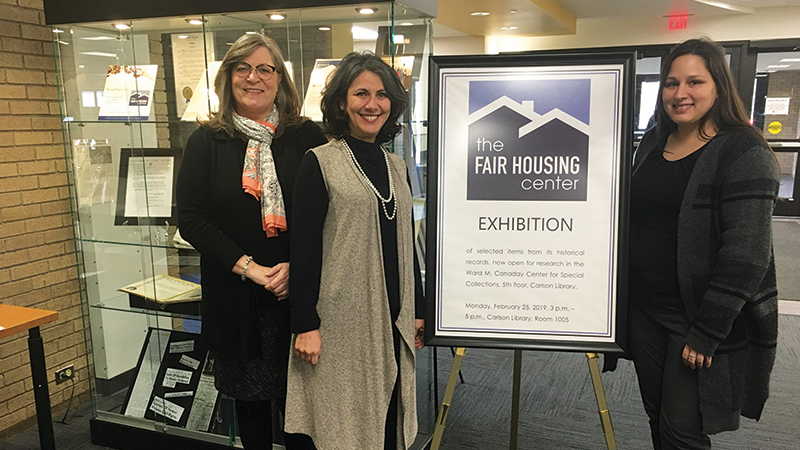 Recent exhibit at the UT Canaday Center, which now holds archives from the Fair
Housing Center dating back to its beginnings in 1975. (Left to Right): President and CEO Marie Flannery, Director of Development Sena Mourad Friedman, and Staff Attorney Christina Rodriguez.

Compared to other areas of the country where you’ve lived, what particular challenges do you see in Toledo when it comes to fair housing?
I don’t know that Toledo’s challenges are unique in the Midwest. We’ve become a less industrial society, but people still need jobs. I think that’s what the Midwest in general struggles with.

The Federal Housing Administration came into being after the Depression. Loans weren’t available to African Americans. You can look at the old redlining map [maps used in the discriminatory practice of denying home loans to certain groups in designated neighborhoods], and look at a current dot-density map of Toledo today— identifying areas that are now designated as racially and ethnically concentrated areas of poverty— they almost exactly track those redlined areas. The living patterns of today weren’t created by accident. What barriers are in the way that keep people from having the opportunity to move if they choose, or have the funds to fix up their neighborhood and to improve their homes? Removing those barriers is the core of what fair housing is about.

What projects does the Center have going on right now?
WIMBY [Welcome In My Backyard] was launched at the Fair Housing Summit back in September as a way of counteracting “NIMBYism” or “Not in my backyard” mentality that unfortunately exists. We have a website that explains how and where you can take the WIMBY pledge. We want to be welcoming and inclusive, and celebrate diversity.

Recently, a neighborhood in Perrysburg, where an African American couple had put an offer in on a home, had racial slurs, the letters KKK, and things like that, spray-painted on the house…it was a wake-up. There’s still work to be done, so we keep plugging along.

To learn more about the history and role of the Fair Housing Center in Toledo, visit toledofhc.org. You can also view historical documents related to the FHC that were recently archived and put on display at the University of Toledo’s Canaday Center housed in the Carlson Library.