Nestled in Millbury, Ohio a hidden equine gem, The Healing Barn, is looking to shine.

Started in 1995, run by a mother-daughter duo, Nancy Swigart and Corri Mayo, the rescue and rehabilitation facility cares for abused and neglected horses.

Swigart began when the pair rehabilitated a horse they adopted in the mid-1990s. From there, they started working with friends’ horses, which quickly grew into The Healing Barn.

The barn rehabilitates horses as well as people, offering volunteer opportunities for introverts or domestic violence victims to enhance self-confidence by working with the animals.

Despite all their work and years of experience, Mayo explained, “People that live right down the street from us have no idea that we’re here, who we are or what we do.”

The barn utilizes traditional methods of medication and antibiotics while focusing on alternative treatments like natural herbs, essential oils and touch-based, Reiki healing techniques. Several “lifer” resident animals, not available for adoption, need extensive care but are some of their best success stories. 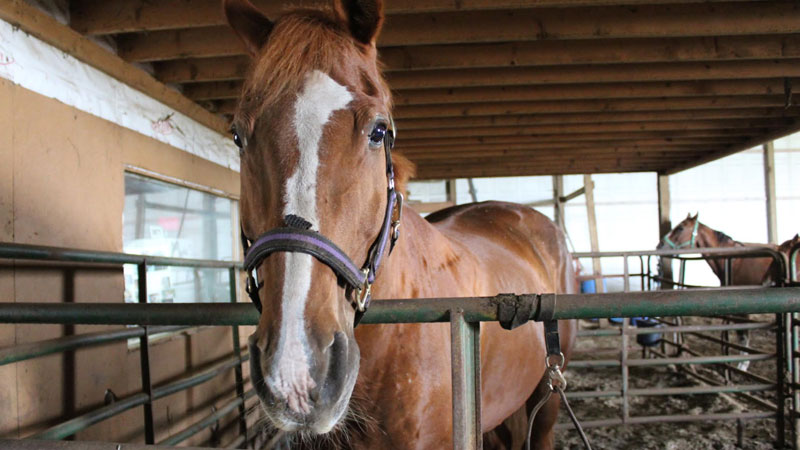 One of the lifers, the barn’s first extensive rehabilitation case, is a 33-year old-horse named Nicky Newman. Nicky came to the Healing Barn in 1999 with a broken pelvis from slipping on ice. With medication expensive or unattainable, alternative methods were used to rehabilitate Nicky. Mayo bonded quickly with the horse and in 2001, the two competed and won Best in Show in a versatility competition.

According to Mayo, the worst case faced by the barn is George. In 2004, the 2-year-old came to the barn with a severe facial wound and infection from an ill-fitting halter. George had lived his life in a stall and had never seen the outside world. Once the staff rescued him, they unhooked his halter and began the slow process of habilitation. “It was really cool,” said Mayo, “because he was starting this new chapter; he was free.”

While the barn is a nonprofit organization, Mayo said grants and other sources of government funding are “very limited.”  The cost of feed and bedding fluctuates with the season or the state of the economy.

Kelly Yetter, The Healing Barn event coordinator, explained during the 2008 recession the barn struggled to obtain sawdust from their usual supplier because the company’s furniture orders were down. “All kinds of stuff relates back to what can happen here and what we need,” said Yetter.

Healing Barn natural remedies come from Mayo’s partnership with Healing Herbs while other costs are out of pocket. Donations come through the barn’s website and an annual fundraising open house.

“It’s hard to get people to be drawn in and care about your cause if they don’t know…about us,” said Yetter. “Part of the mission here is to educate…because we want another generation of people who are kind to animals.”