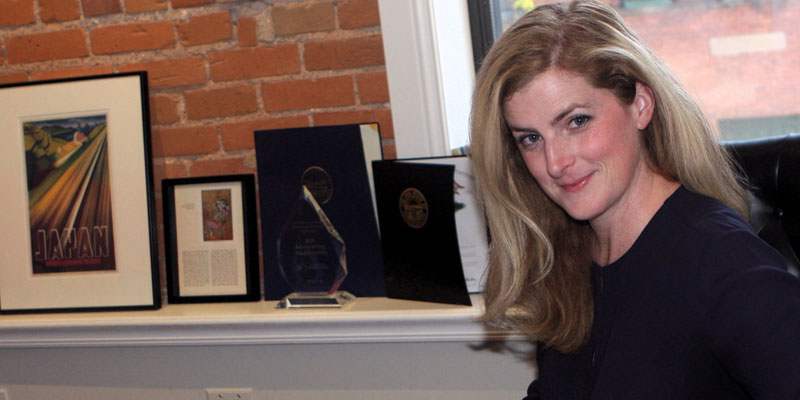 I sat in Megan Mattimoe’s office, waiting for her to finish an interview with a documentary filmmaker. Her office window was open, overlooking Adams Street in Uptown. Her back wall, covered with orange, pink, and blue Post-It notes, included three oversized notes that said “Resources,” “Get Involved,” and on the far right: “The Issue.”

For years, Mattimoe’s issue has been human trafficking. There are people in our community who use others for labor without giving them fair pay or an option to leave. And there are people in our community who have been trafficked, who were used and controlled by others. If they are lucky enough to find an exit, many of these people are left without sufficient support.

Mattimoe’s organization, Advocating Opportunity, works to help these victims. They help remove people from trafficking situations. They work to expunge criminal records for people who were forced to commit crimes that they never wanted to commit, like prostitution. Through litigation, advocacy, and social work, they give human trafficking survivors a chance to start a new life.

Mattimoe wanted to be a human rights lawyer since high school. She went to the University of Toledo for her undergraduate and law degrees, and found a job as a public defender in Lucas County’s Juvenile Court. Clients came to her, accused of breaking curfew, or running away.  In some of these cases, Mattimoe felt like something more was going on.

Then came a case where a client revealed to her that she was being forced to have sex with strangers.  Bound by attorney-client privilege, Mattimoe could only encourage her client to contact the authorities—which she eventually did. The FBI arrested the traffickers, and Children’s Services took her client to a safe home.

The Juvenile Court began assigning Mattimoe to cases where trafficking appeared to be involved. Soon, Mattimoe was spending most of her time on trafficking cases.  Last year, with just $20,000 in funding, she started a non-profit, Advocating Opportunity, and worked with over 70 human trafficking victims. “Our model is a gap filler,” said Mattimoe. Her organization provides support for human trafficking victims that other social service angencies cannot provide. “We want them to become completely self-sustaining, on their own terms,” said Mattimoe.

“I’m thriving today,” said Michelle Moore, one of AO’s board members and a human trafficking survivor. She is working on getting her record expunged. Not only does AO help survivors get out of harm’s way, but they also offer survivors “the next step at professionalizing,” says Moore, through expungement and their new Health & Wellness program. A criminal record, “always is a shadow hanging overhead,” says Moore. Expungement provides survivors with a clean slate to find a career and move on with their lives.

The Ohio Attorney General’s Office recently awarded AO a Victims of Crime Fund grant of four hundred thousand dollars—a program-altering sum of money that will, for at least the near future, give AO stable footing. “She’s a force of nature,” said Catherine Hoolahan, a part-time staff attorney with AO, referring to Mattimoe. Hoolahan had planned to retire before Mattimoe got her involved with AO. “She’s been doing this for seven or eight years with very little help.  I’m glad to help her get it off the ground,” said Hoolahan.

AO is finally receiving the support it needs. They will soon have a second, full-time attorney, working in Columbus, and a full-time advocate that will guide victims through the rehabilitation process. Last fall, the Ohio State Bar Foundation awarded AO the Outstanding Organization award, and in March, the American Institute of Public Service awarded Mattimoe the Jefferson Award.

The president of AO’s board of directors, Jeni Belt, spoke at AO’s first fundraiser on November 5. Belt thanked everyone for coming to support the organization.  She also thanked Mattimoe for all her work. “I got involved in this because I believe in this woman,” said Belt. Everyone in the audience applauded, excited to see what’s next for AO, because,  they too, believe in Mattimoe.

Dorian Slaybod is an attorney happily living in Toledo.