THORNVILLE, OH – Classified as a gang by the FBI, Insane Clown Posse fans, colloquially known as Juggalos and Juggalettes, endure marginalization at the hands of polite society. Forging their own alternative world, The Gathering of the Juggalos annually impels ICP's community of followers together in hajj, if only for the few days out of the year when the freak-rap duo’s festival commandeers the Legends Valley grounds, this year on July 22 through July 26.

The slipshod carnival rides and abundance of scattered trash after the first four days lent the festival an air of depravity rendered all the more authentic by the laissez faire black market entrepreneurialism. Because no one was searched by any would-be authority figure on the way into the venue, carrying beer inside wasn’t a big deal. Juggalos were openly selling beer advertised by Sharpied cardboard signs with rates set at two dollars for one beer and three dollars for two.

Other offerings included one Juggalo brandishing a plastic sandwich bag full of marijuana, which commanded as little as $10/gram.

I heard one disembodied male voice cackle through a megaphone, advertising LSD for $10. (I was later informed by an unpainted Juggalo named Ben, without asking him, that $10 for LSD was a price gouge. He said that the substance should fetch five, maybe six dollars at most, and that in response to any higher quotes, you should “move on to the next dude because the shit is everywhere.”)

People were also selling face painting services for $10 for a “medium-large” face at a few different campsites. There wasn’t as much face paint as an uninitiated Juggalo like myself would’ve expected. I did my part to revise this observation by visiting a nearby campsite advertising face-painting services. I wanted to participate. 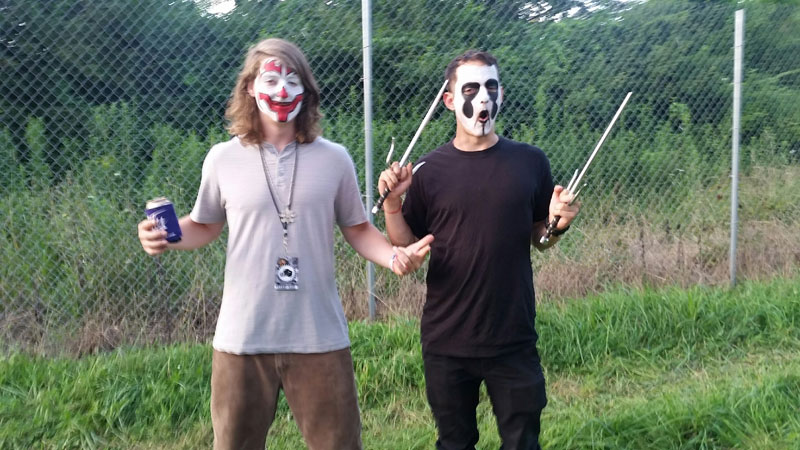 Faces painted, I blended in convincingly enough for Vice media’s video team to hastily trot over for a video interview ambush. The Vice video producer/reporter (a young woman with algae-green hair brackish at the roots) interrogated me with questions, “So how long have you been a Juggalo?” I thought, “For the two hours since I’ve had my face painted,” but ended up hesitating at the prospect of my acrylic clown mug (made a little jowly by the ill-placed smile lines painted at the artist’s liberty) projected far and wide about Vice’s well-followed social media vehicles. Instead, I said, “I figured, when in Rome…”

I then revealed my press pass, saying that I too was covering the festival, for an online piece. The Vice video journalist smirked and paused just long enough for most people to snap nonverbal judgment upon another. When she handed me the interview release form and I refused to sign, the video producer/reporter and the two camera crew members shrugged in unison and trotted off without a word.

Since our press passes granted us photo pit access for the first 3-songs of each set, we enjoyed an unobstructed vantage of Machine Gun Kelly beckoning for weed from the stage. The crowd relayed an acrylic bong to the stage, which MGK packed with herb and began to smoke to applause.

We cleared and then reconvened in the photo pit with other press pass-holding attendees for ICP’s set, the four day festival’s culmination. When the curtains shrouding the stage drew open to reveal false tree stumps stocked with two-liter bottles of Faygo Diet Root Beer, a man dressed in a gold-sequined tailed ringmaster’s jacket jogged to the mic at center stage to announce the Insane Clown Posse’s entrance. Mid sentence, a targeted Faygo Cream Soda two-liter bottle struck him in the side of the face/neck, eliciting from him an expression of acute shock. This lasted for about a half second before he finished his lines and bounded offstage. (FULL DISCLOSURE: This man was in attendance at my bar mitzvah in 2002 and watching him assaulted with low-grade soda is a troubling image to shake from my mind.)

The show began with a liberal dousing of Faygo Diet Root Beer, which coated the front row in aspartame-laced sticky brown liquid. The Faygo Diet Root Beer – the soda variety reportedly preferred by ICP said to be less corrosive when unintentionally-but-inevitably applied to sound equipment in particular moments of passion – boasted a chemical flavor that lingered on my palate for the ICP show’s duration. (It also turns out to be quite irritating when in contact with the eyes.)

Dancing beside the same Vice video producer/reporter from earlier, I wryly asked her if her video production was “branded content sponsored by Faygo.” When she misunderstood my sarcastic remark she said that Faygo wasn’t “down” with ICP’s incorporation of the brand’s products into its shows. Somehow the information about Faygo’s reluctance to embrace its status as the quintessential beverage brand of the Juggalo culture and diaspora found a way to surprise me.

When ICP played “Fuck the World,” the pervasive eschewal seemed all the more appropriate considering all that’s been written about Juggalos' downtrodden portrayal (particularly by such outlets as Vice). The feeling that this song encompassed the base of the Juggalo movement was palpable. The truth that Insane Clown Posse devotees find in that song’s message roots the appeal of their followers. The Gathering of the Juggalos is not the real world, uncomfortable with Juggalos’ existence; it's a temporary manifestation of an alternative realm they've built themselves. 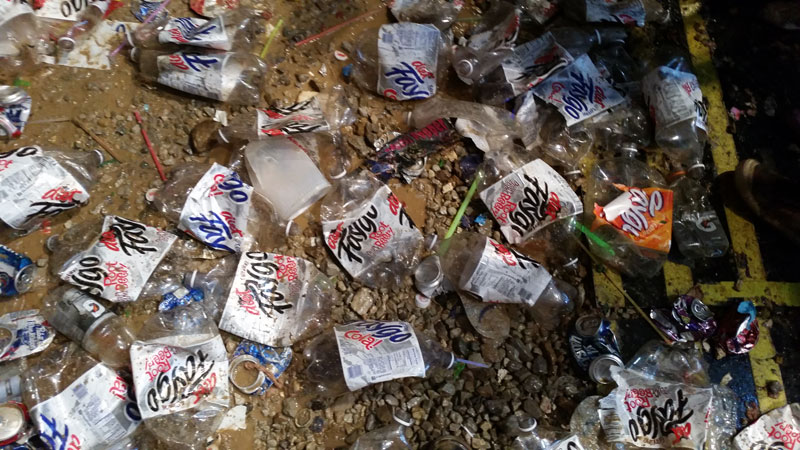 After the show, a plastic scavenger's wet dream

Earlier in the day, I spoke with a man named Mark who was operating the Jesus Loves Juggalos stand, which sold t-shirts bearing ICP’s trademark "hatchetman" silhouette gallivanting with a cross in place of the axe. I asked Mark if he thought people found similar truths in both ICP and Jesus. He said, “Truth is truth. If it’s true then that’s it. Case closed.”

When I asked him why this crowd seemed a particularly worthy demographic for proselytization, he quoted a bible passage off-hand that commanded followers of Jesus Christ to spread His message to people of the world. Mark then asked me, “Are these people not of the world?”