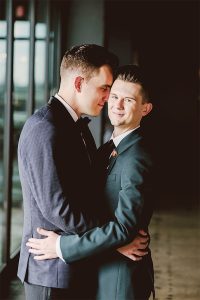 How did you meet?
We both attended BGSU, but we actually met on Twitter! Lucas created a Twitter account and after following a few people, I showed up on his “people you may know” list. He followed me and I messaged him. We agreed to meet for coffee a few days later and the rest is history!

Who popped the question, and how?
I (Justin) did. We had been dating for a while, so for his birthday I took him and a few of our closest friends to Petosky, Michigan for a weekend trip. Lucas and I went to Petosky a few years earlier for a little getaway and we fell in love with it. That place holds a special spot in our hearts, so I knew I had to propose to him there. When we arrived with our friends, I told him that he needed to wear nice clothes because we were going to a fancy winery and I wanted a picture with him on the beach at our campground before we left. We were posing for photos and then I popped the question. He said yes immediately.

How long was the engagement?
We were engaged for almost two years.

What made your wedding day special?
Everything! We each got to marry our favorite person in front of our closest family and friends, what’s better than that? The feeling of love, not just for each other, but with everyone else there, was just so overwhelming in the best way. 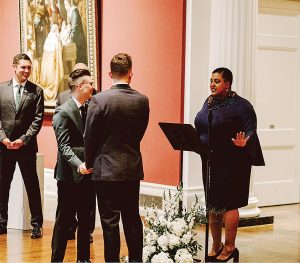 Justin and Lucas were married by Candice Harrison in the Toledo Mueum of Art’s regal Red Room.

During the wedding planning process, did you ever want to elope and just get it over with?
There were a few times we discussed the idea of just getting it over with, but we never seriously considered it. We always knew that we had to have a big party with all of our favorite people. I think when we started calculating the cost of everything, we were a bit intimidated, but we made it work because we wanted everything to be perfect. 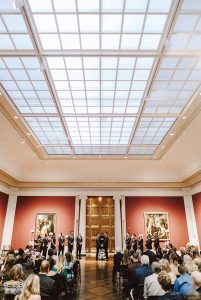 “We wrote our own vows for our ceremony and the moment we read them to each other felt unreal. We were in a room full of people, but we were so focused on each other that it felt like we were the only two people in the world.”

Was there anything in the wedding that didn’t go according to plan?
In the months leading up to our wedding, so many people told us to prepare for something to go wrong, but guess what? Nothing did. It was literally perfect. We were so incredibly lucky, but we are also serious planners, so the margin for error was very slim.

Did you do anything during the wedding that would be considered non-traditional?
Having a gay wedding in itself is still considered nontraditional. Rather than being intimidated by this, we used it to our advantage. We could do whatever we wanted because there’s no framework. Here are a few things we did that many would consider nontraditional: 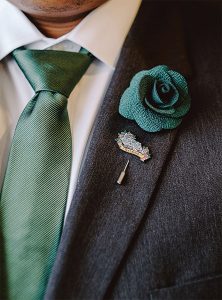 “Rather than wearing boutonnieres, our wedding party wore a single cloth flower and a unique enamel pin that was representative of our relationship with that person.”

Your top moments:
There were so many wonderful moments, it’s hard to pick three. But I’ll try… 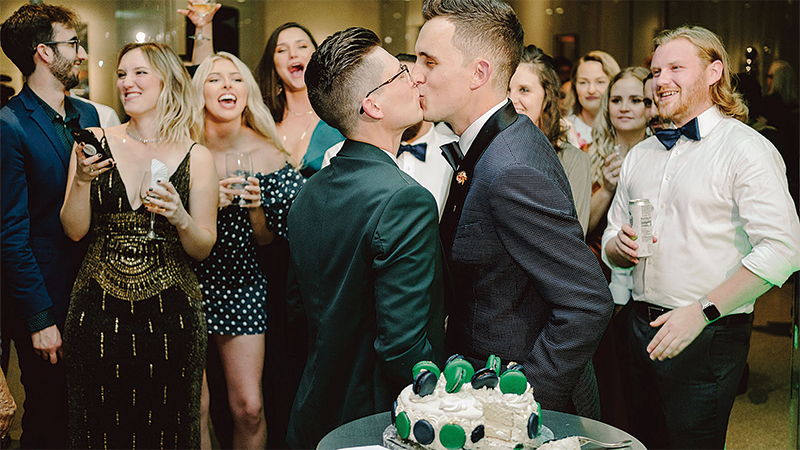 Wedding coordinator:
We planned the wedding ourselves in its entirety, but I want to make sure we mention Amanda Scasny from the Toledo Museum of Art who helped make our dreams a reality and worked with us every step of the way.

Caterer:
Chef Joe Felix at the Toledo Museum of Art.

Baker:
Our cake was from So Sweet Lebanese & French Pastries. Our desserts were from Jera’s Heavenly Sweet.

Videographer:
Swatch Studios was our photographer and videographer.

Music/entertainment:
Our DJ was Eric Chase, a local radio DJ at Q105.5. 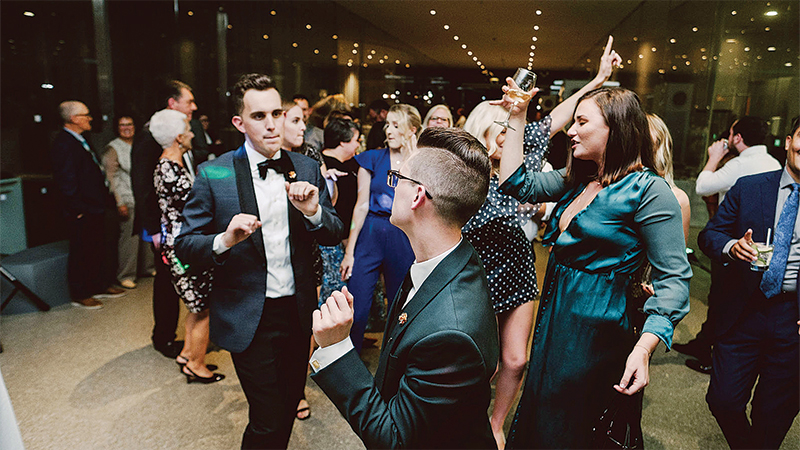 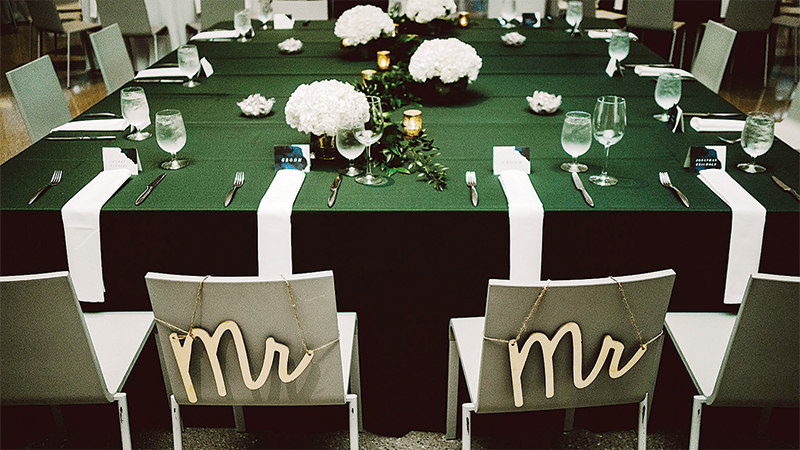 Where did you spend your honeymoon?
We haven’t gone on one yet, but we plan to go to Japan in the spring!

Tips and tricks for other couples:
Give yourselves time to plan. We were engaged for two years and we started planning right away. A majority of our wedding planning was almost complete six months prior to the big day. It made the last-minute details much easier to handle. 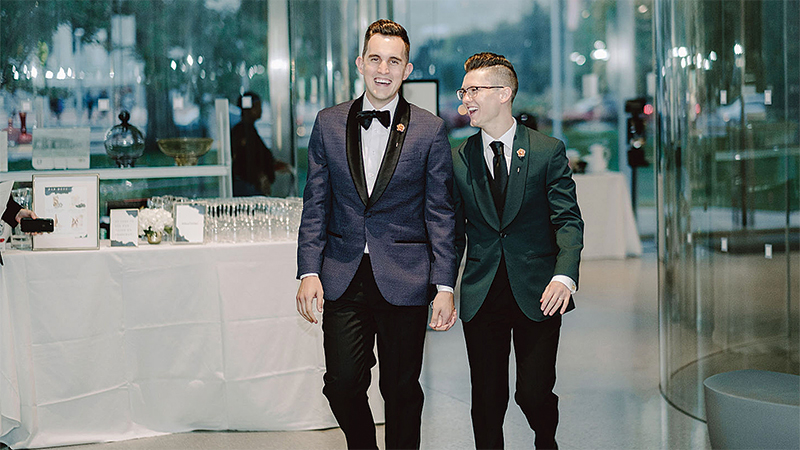 Did you have a shower or bachelor parties?
A lot of our family and friends hadn’t met before because we are from opposite sides of the state. So we wanted to have a few events where these folks could get to know each other a little better before the big day. We had our family and wedding party visit Toledo one year before the wedding for an engagement dinner. My cousins, who live near Columbus offered to throw us a wedding shower a few months before the wedding, so we did that as well.

We both had our own bachelor parties. Lucas went to Detroit for a weekend with a few of his friends. They went to a bunch of restaurants, ate some sweets, broke out of an escape room, and had a few drinks. I went to Hocking Hills with some friends where we did some hiking and kayaking. We also played video games and watched movies in the cabin that we rented. 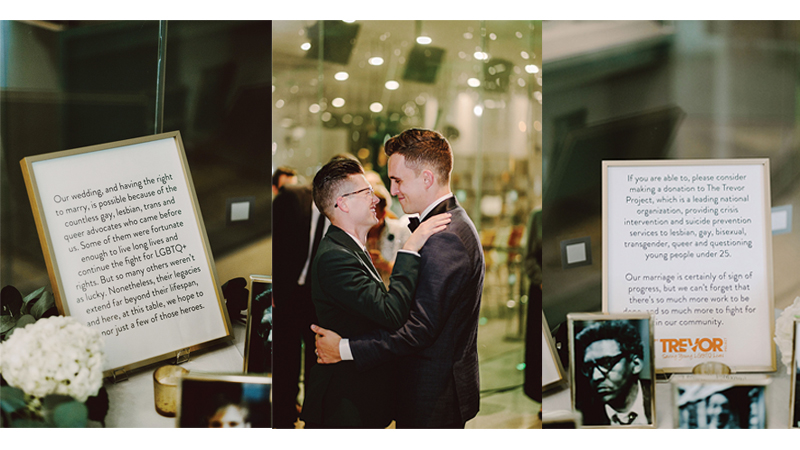 About the Trevor Project
At our wedding, we had a special memorial table that highlighted individuals who fought for or had an effect on the LGBTQ+ movement. In addition to having photos and mini-biographies on each person, we encouraged our guests to donate to The Trevor Project, a national organization providing crisis intervention and suicide prevention services to lesbian, gay, bisexual, transgender, queer & questioning (LGBTQ) young people. 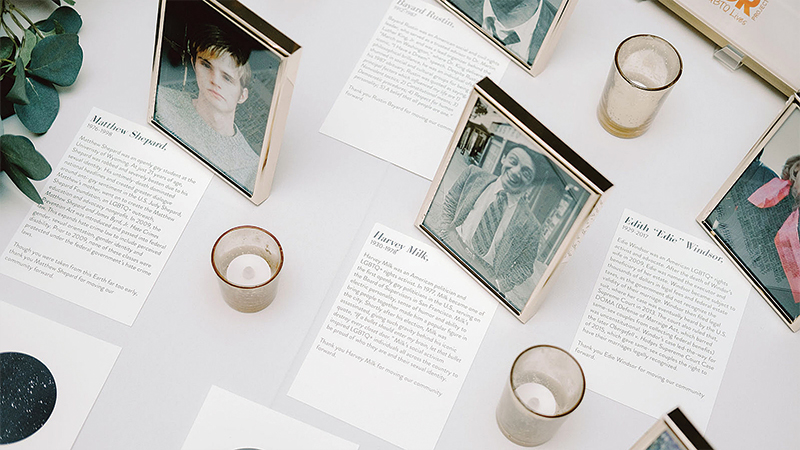