Hip hop in Toledo was conceived in the 1980’s at house parties and school dances; places where DJs, graffiti artists and rappers often gathered to create and share compositions. These homegrown collaborations were reminiscent of a holiday dinner, where everyone was welcomed, recognized and appreciated for their contributions.

To enjoy the buffet of creativity offered by Toledo’s current hip hop players, we revisit the roots of the movement, acknowledging those important artists who first set the table with passion and ingenuity. 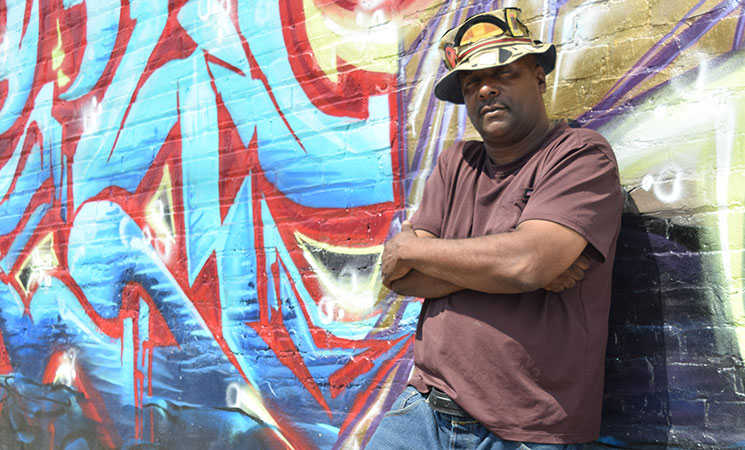 Keith Roberts, aka DJ Keith Success, entertained a crowd of 8,000 old school hip hop fans this past July at the SWV concert in Promenade Park, marking over 30 years of his involvement with Toledo’s hip hop culture.

Keith began his journey in 1984 while religiously watching Toledo-native Darryl McGlown, DJ DMC, spin on some of Toledo’s first turntables and mixers to enter the city limits.

“I would stand at the DJ booth and just stare all night. Wouldn’t talk to girls or watch anybody dancing. I knew, ‘One day, I’m going to do that.’”

Thanks to a cosign from another pioneer, the late DJ Rollin Reddick, Keith got his big break on Christmas, 1985 at the Wayman Palmer Center (known at the time as the Kent Center).

Soon after that show, Keith’s love of hip hop became a profitable business for him and his crew, the United Soul Brothers. He booked early performances at both Scott and Rogers High School homecomings, as well Toledo’s city-wide Afro Ball, traditions which continued throughout the 90’s.

In spite of his commercial success, Keith has always been a DJ simply for the love of the art. He hopes that up-and-coming hip hop artists hold firm to the artistry of hip hop instead of chasing Youtube clicks and social media clout. 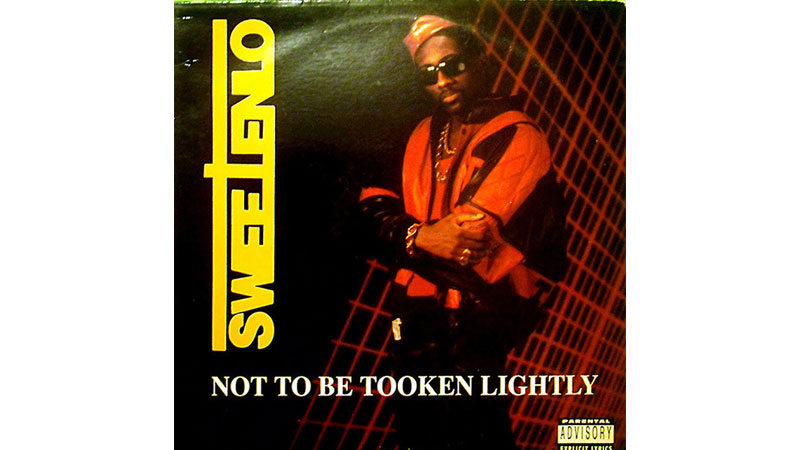 Tim Perkins, a.k.a. Sweetnlo, didn’t like his rap name until a friend convinced him to keep it. After opening for Dana Dane and KRS One at a local show, the name stuck. Sweetenlo released his first album, Not to be Tooken Lightly, with Ichiban Records, a label famous for artists such as Sir Mix-a-lot, MC Breed and Vanilla Ice, in 1990. It was the first major record deal to come out of Toledo. In 1991 Ichiban released 12” singles Making it Smooth and Back for Payback, co-produced by Keith Success.

2. Council of the New Order 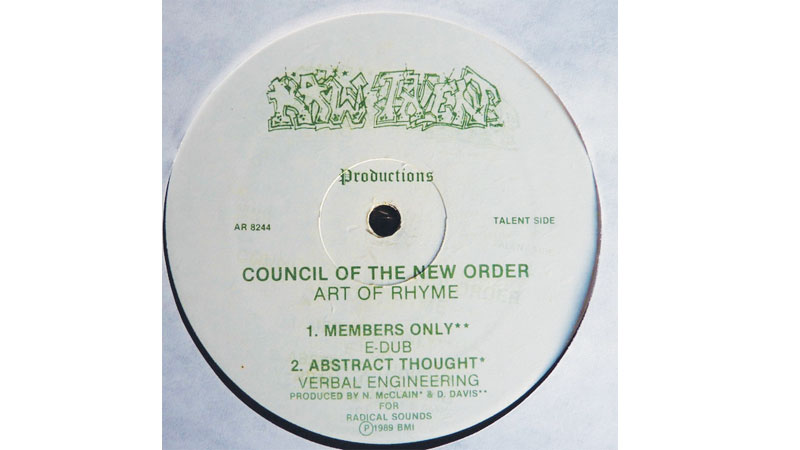 In 1989, Keith Success, Derek Davis and J. Oliver created Council of the New Order who produced and pressed a couple hundred copies of The Art of Rhyme.In 2000, Keith sold his record collection, which included a copy of Art of Rhyme, to Dusty Grooves in Chicago. Soon after, he learned that someone bought the record and resold it online for $650. Skeptical, Keith secured another copy of the album and, on a lark, offered it for sale online for $1,000. The album was purchased in 4 days by a collector in Europe. It is rumored that Keith is in possession of a third copy of The Art of Rhyme, but has no intention of selling it. 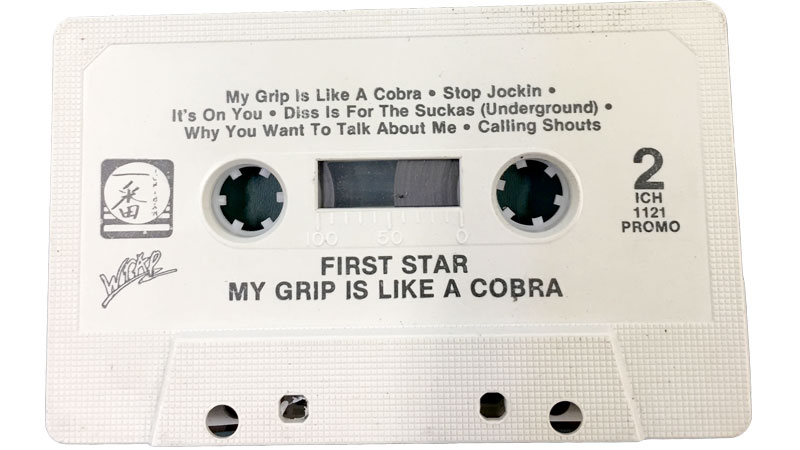 With the help of Sweetnlo’s label Wrap Records, a division of Ichiban, Keith helped female MC F1rst Star release her first album My Grip is like a Cobra, in 1990, featuring back up dancer Kaj Boogie, now a Juice 107.3 radio personality. 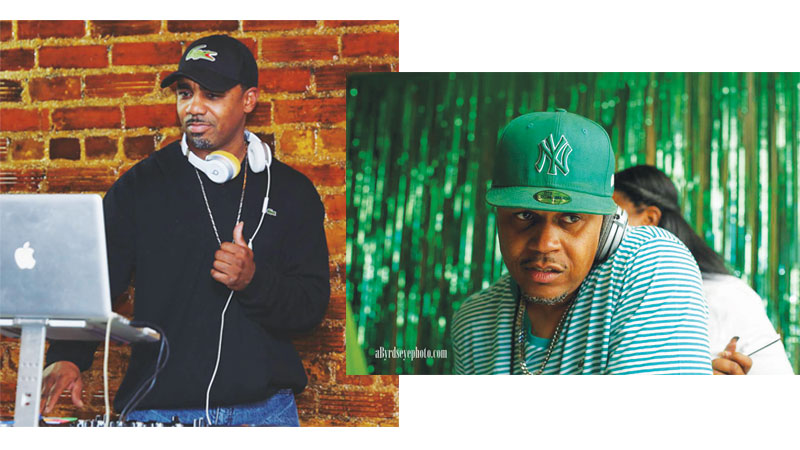 For DJs Kaj Boogie and Jay Roc, the center of Toledo hip hop was in the neighborhoods surrounding Scott High School. Kaj Boogie started as a dancer performing at talent shows at the Copeland Union Hall on Ashland Ave. Jay Roc was inspired to DJ after seeing a 15-year-old Keith Success scratching and mixing at a party at the Kent Center on Franklin Ave.

The two met in the early 90’s as Jay Roc made a name for himself in Bowling Green performing at college parties and Kaj Boogie began to transition from dancing to rapping; backing up female MC F1rst Star on her album My Grip is like a Cobra. 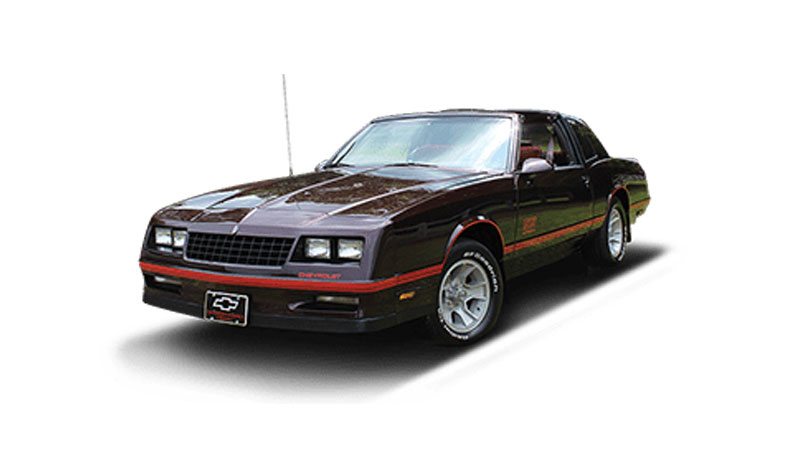 Now known as Dem Radio Boys, the two have been radio personalities on the Juice 107.3 for over a decade. Proud of Toledo’s local talent, they have provided support via radio programming and music seminars for over 10 years.

In 2005, they introduced a platform for local artists to showcase their talent on air called “Battle of the Beats.” At one point it was the highest rated radio program in the area.

DJ Jay Roc was inspired to DJ after seeing a 15-year-old Keith Success scratching and mixing at a party at the Kent Center. Now the Wayman Palmer YMCA.

As the music landscape has shifted from radio stations, CDs and tapes, to Youtube and social media, the pair have maintained their relevance by remaining grass roots; keeping a watchful eye out for Toledo’s next big thing. 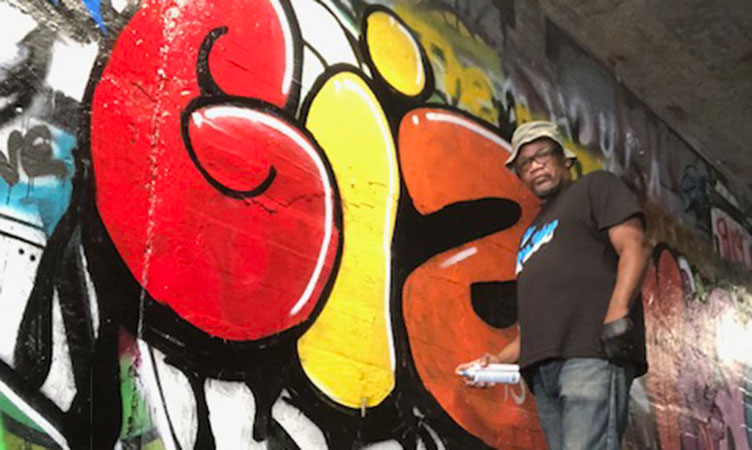 In the early 80’s, before hip hop was given a proper moniker, artists were searching for the right outlet to plug into. Since the genre originated, in part, through break dancing, those who couldn’t dance moved on to other aspects of the culture— if you couldn’t dance, you rapped and if you couldn’t rap, you became a DJ.

Wade Harrison, known as Swade, chose a completely different outlet— the graffiti art popularized by the classic hip hop films Wild Style and Style Wars (circa 1982 and 1983). Like Keith Success and other artists at the time, Wade created graffiti more for fame than monetary gain. His art was a way for him to stand out from the crowd.

In 1984, Wade started tagging city buses and his Woodward High School neighborhood with his signature ‘Swade.’ He became best known for his first large aerosol piece on the Dorr St. viaduct near Smead Ave. Eventually his craft caught up to him and trouble ensued when a Tarta bus driver made a connection between his “art” and his jacket, which bore his name. Thanks to his late mother, Swade avoided a school suspension and other major trouble with the law. 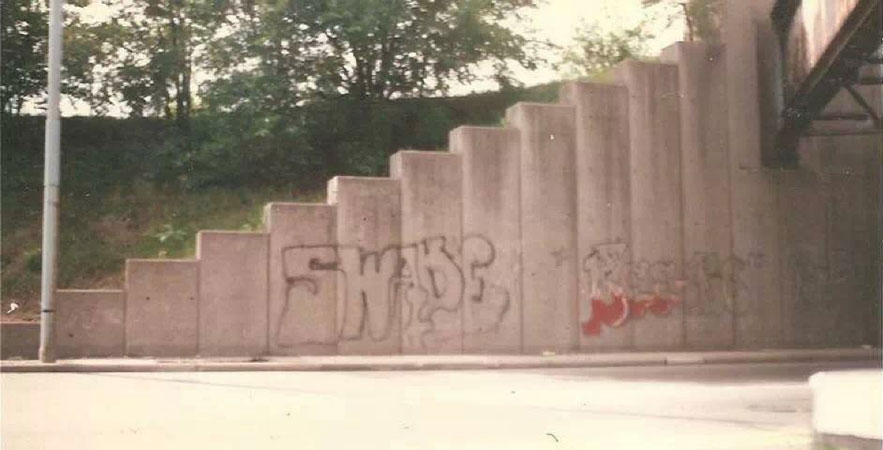 Wade’s first aerosal piece was seen daily by commuters on this Dorr St. viaduct (circa 1985).

Wade left the Toledo scene in 1989, headed to Pittsburgh to attend art school. But Swade’s name was kept alive by his brother Shaheed and another graffiti artist by the name of Tragic. Shaheed shared Wade’s old sketchbooks and magazines with Tragic who used them to teach himself the art form. Thanks in part to Tragic, Wade returned to Toledo in the late 90’s as somewhat of a legend among local graffiti artists. 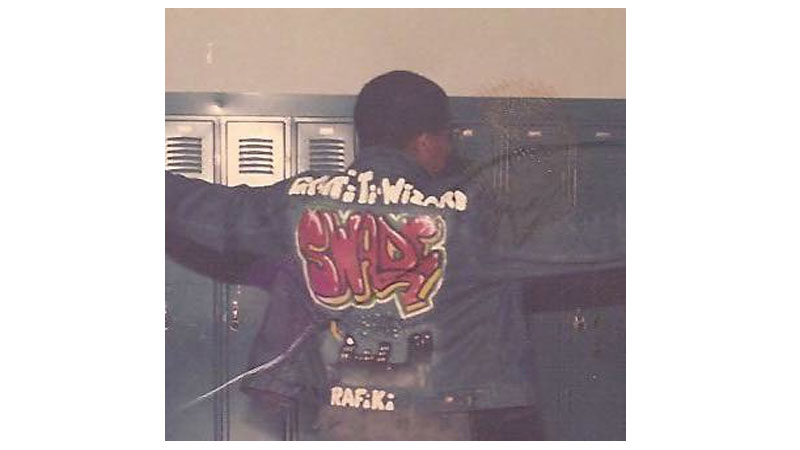 While other artists of his generation have faded away, Wade has maintained his status among Toledo writers and artists by returning home to create murals and fine art here in Toledo, as well as creating where he now lives in Atlanta, GA.

Toledo hip hop isn’t just history— the current scene boasts dozens of MCs who bring our city’s unique style into the future. Want to learn more about today’s bragworthy Toledo rappers? Meet one of the biggest promoters of local talent: 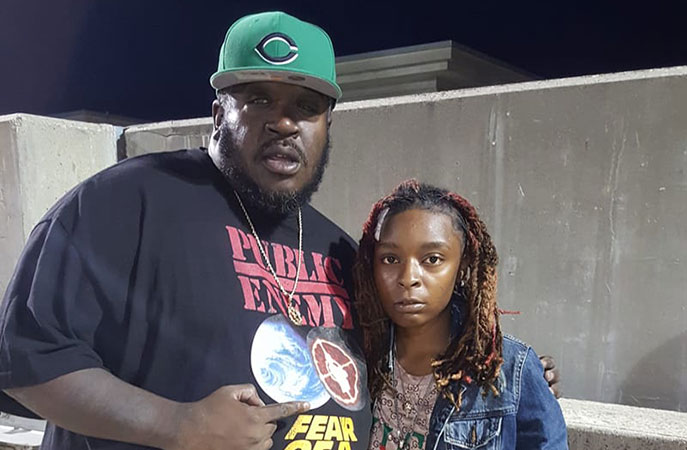 Originally from Cincinnati, DJ Eddie Bauer arrived in Toledo as a radio personality on HOT 97.3 in 2013. Although late to the scene, he immediately made his presence felt by connecting to Toledo’s underground hip hop community.

His ubiquitous mantra, “Gimme My Shine,” was born from a personal experience he had as a rapper during his college days in Cleveland. While attending an event at the Rock n Roll Hall of Fame, he approached the DJ and handed him a copy of a mixtape he had just finished, asking the DJ to give it a listen. As he walked away from the DJ booth he saw his tape thrown in the trash. “I never forgot that. I was doing college radio at the time at Kent [State University]. I always told myself I’ll never be that dude. I’ll always give an artist a chance. At least a listen. If it’s trash I’ll tell them it’s trash but I’ll always listen. The name of my brand is ‘Gimme My Shine.’

The whole concept of that is I’m here to give you your shine. If you’re hot, I’m going to help break you. That’s my job as a DJ.”

That lesson and Bauer’s commitment to provide feedback to aspiring artists led to the creation of the Mud Massacre, a series of Youtube music videos featuring a whos-who in Toledo Hip Hop. Notable artists include Rocky Duh, Two Tone, She Speaks, and Julian Thomas.

While Eddie has worked all over Ohio, he feels that Toledo has impressive, even when compared to cities such as Cleveland, Dayton and Cincinnati. “I’ve worked with a lot of MCs on different levels, in different cities, from MGK to Chip the Ripper. But consistently, as a whole, Toledo has the most talent,” Eddie confirms.

Rebirth Of The Slick 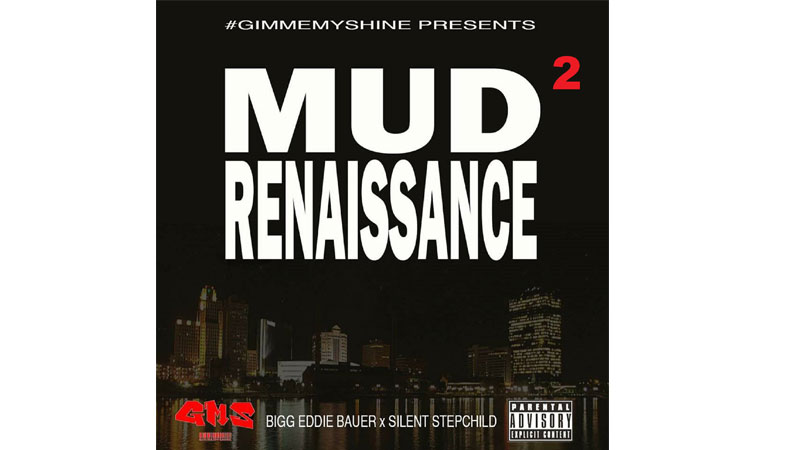