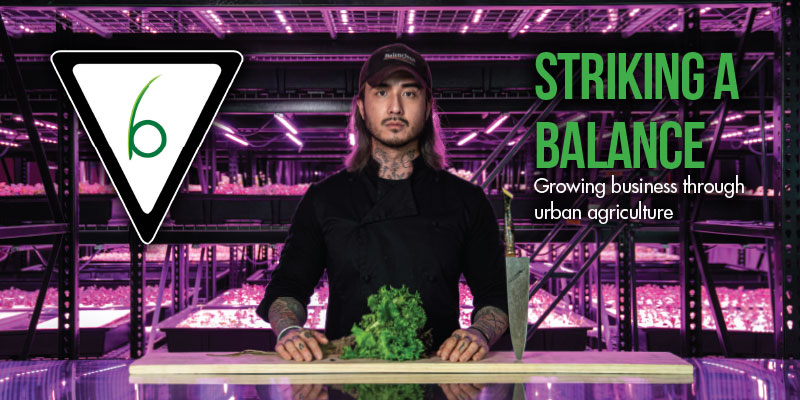 Balance Pan-Asian Grille owners Prakash “PK” Karamchandani and HoChan “CJ” Jang are on a mission to make their restaurant completely sustainable. Since opening their first restaurant in 2010, the University of Toledo graduates have made a name for themselves in the fast-casual industry, taking home the Top 100 Award from FastCasual.com for the third year in a row (2017-2019), and their fresh, produce-centered Asian fusion cuisine has become a locally-craved favorite.

But popularity isn’t always easy. Volume demands have been hard to keep up with. Making sure they stay true to their mission to provide quick, healthy, affordable and fresh fare has become increasingly difficult.

To keep their business in balance, PK and CJ have to keep a lot of moving parts in equilibrium— four area restaurants, a location in downtown Cleveland, a new composting effort, and an 8000+ sq. ft. aquaponic farm in downtown Toledo. Yes, really.

The restaurant industry is notoriously tricky. Some basic considerations for a typical restaurant owner— coordinating the purchase of supplies and ingredients, managing employee and restaurant schedules, maintaining standards and planning for what customers might order in the coming week— all require a sense of premonition that would cause Rasputin envy. And Balance is anything but basic.

With demand for fresh ingredients, deliveries of organic and local produce prepped on site every day— they are committed to limiting as much waste as possible and have even developed a technology to analyze sales to project future demand. They recently introduced a new composting system and are working with area partners to calculate the nutrient density of menu items.

Despite all the science that goes into it, PK says that Balance isn’t only driven by the desire to save the planet and lower their carbon footprint, adding “even though that’s great.” The restaurant’s biggest motivation is actually very straightforward: “What we really want to do is sell super-fresh food.”

Straightforward isn’t always simple, a lesson PK quickly learned. The more the operation grew, the more difficult it became to keep things cost-effective while also having enough organic or locally-sourced ingredients to use to prepare their produce-centered menu items.

“[Sourcing produce has] become a bigger and bigger problem,” he says. “ We used to be able to go to the farmers market and buy what we needed. Then we got in good with a couple of farmers— Bench Farms, Shared Legacy, Green Farms, Toledo GROWs— and they were able to supply us, but that is seasonal and now we’re outpacing their volume.”

Balance’s Asian fusion cuisine is full of veggies— part of their effort to “change the standard American diet to something more Asian,” with produce at the center of the plate. “With just four stores in Toledo, we go through 400 pounds of kale a week,” says PK.

But produce is not a commodity product, which means costs fluctuate up to 40 percent a week. Not only is this a huge expenditure for the restaurant, but the unpredictable prices make the menu’s low-price points difficult to manage.

So, if you can’t get the amount of produce you need locally, what do you do?

You can outsource, picking up produce from Mexico, like most of the industry. “Honestly, it’s not good,” PK says. “By the time we get it, it’s weeks old.”

Or, you start your own urban farm in downtown Toledo using a complex aquaponics system, the likes of which no one had ever created.

To establish a farm in the middle of a city, the Balance team had to get creative. First, they had to find a place to break ground.

“At the beginning of 2016, we opened a restaurant in Perrysburg. Immediately after that was open and stable, we started looking for what the next location was going to be,” PK recalls. “We knew we wanted a location in downtown Toledo because downtown is coming back to life, and we have to do something cool. But we had a problem to figure out— how to source local produce and not pay out the nose for it.”

With a dream to find a site that could serve as both a restaurant and a farm, the team began looking and ultimately found a building at 215 N. Summit St. that had not been occupied for 30 years.

“When we came to this building there was nothing here,” PK said. “We found other tenants and were able to get this whole building occupied, utilizing a weird piece of real estate,” referring to the long, deep retail space with no frontage that is so unpopular now. In real estate terms, spaces like these are deemed “bowling alleys,” but PK saw an opportunity to revitalize this wasted urban space by splitting it in half and utilizing the back for the farm. 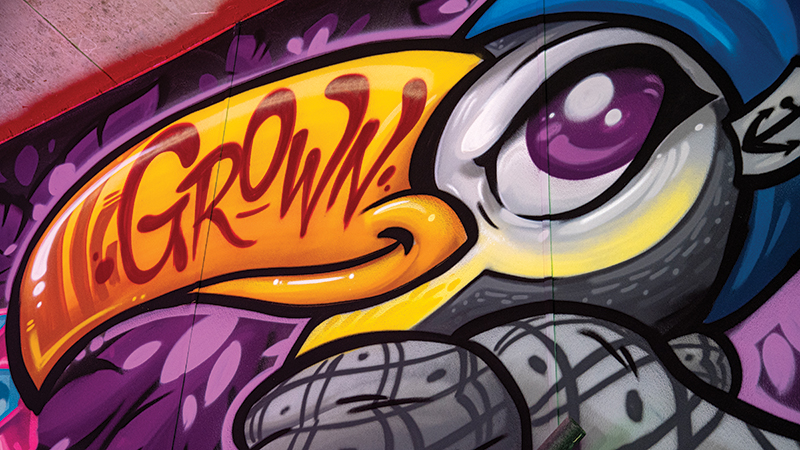 Along with creating ample space for an aquaponic farm for completely organic produce, using these “bowling alley” style spaces is a way to “bring urban cores back to life.” Abandoned retail and warehouse spaces are a great setup for what they hope to do with their restaurants— make them totally sustainable, urban farm-to-table operations.

To start growing, the team had to continue searching for creative solutions. With a plan to create an aquaponic farm, Balance hooked up with Dan Sadoski, of Great Greens LLC, an experienced local grower of hydroponic microgreens, who later joined as an operating business partner for Balance Farms.

With Sadoski’s expertise, Balance designed a new system that PK describes as a ‘post-organic.’ “What most people think is organic produce has pesticides,” PK explains, adding that organic produce is still allowed to have fertilizers and pesticides, as long as they are certified as “organic.” “This facility uses no pesticides or synthentic fertilizers of any kind. It’s 100 percent biodynamic and a completely controlled environment.”

To keep the produce healthy, the facility has strict protocols put in place to ensure biosecurity. Employees who work at the farm are required to shower daily, scrub down, step on rubber mats with bleach to disinfect their shoes and change clothes before entering. When they’re done, they change out of their clothes, which are later laundered on site.

While the protocol might be extreme, it’s all necessary to prevent a breach. And, while unlikely, if a breach does happen, a plan is in place: “We will use a biodynamic solution, like releasing ladybugs or some other force to out-predator the pest. But we don’t ever want to get to that point.”

To demonstrate how the whole farm works, PK provided a meticulous tour of the facility. While explaining the chemistry, biology, and engineering of the farm, a playlist of Sublime and Bob Marley favorites blared in the background. And, while there is something nostalgic about high-efficiency LED lights, a one-drop drum pattern and a science lesson (that is tough to understand), showed, painfully, that our capacity for scientific reasoning has not improved since college.

The main thing to understand regarding Balance Farms is aquaponics, the combination of aquaculture (raising fish) and hydroponics (the soil-less growing of plants that uses less than 1/10th of the amount of water required for traditional farming).

Unlike traditional hydroponics, which compensates for the lack of nutrient-rich soil with additive solutions, aquaponics creates the nutrients plants need through aquaculture. “We’re building a biology,” PK says. “When it gets up to scale, it will be more-or-less self-sufficient.”

In the fish room, where multiple tanks hold a variety of fish— including tilapia and Sadoski’s 7-year-old goldfish, “Fatty McFatterson”— the bacterial cultures that allow the plants to grow. “People say fish are the heart of an aquaponics system,” says PK. “But they’re more like the battery. The heart is the actual bacterial cultures.”

Next, the nutrients feed crops in the hydroponic room, a large open warehouse featuring rows and rows of shelving for produce in various stages of development, like lettuce, herbs and kale, staples that are stacked vertically and can grow year-round.

Balance Farms employs a myriad of tools, but two are the most significant. First, spectrum specific lighting comes from a smart system that prevents plants from spending energy, eliminating light spectrums they don’t use to grow. “If you use spectrum specific lighting they use 100 percent of that energy,” PK says. “We’re able to grow some plants 60 percent faster than we could with conventional growing.”

Second, “seven dollars worth of PVC hooked up the right way to maintain the perfect level of water,” PK says with a grin. The water system, which is part of Balance’s proprietary technology, is a “100 percent gravity system” that does not use any water pumps. Instead, water flows through expertly-placed pipes and is cleaned, reused and recycled, allowing the facility to operate on less water than hydroponic farming and far less than conventional farming. “The only way we lose water here is if we spill it due to user error, or through evaporation,” PK adds.

Vertical integration like this is unprecedented in the industry and earned Balance feature story coverage in Nation’s Restaurant News, Fast Casual, Food Equipment, and other industry-specific magazines.

“There are restaurants that do farm-to-table, but to do it on a large scale, year-round, and to do it with a less than $10 per plate price point, is not something we have seen anyone else figure out.”

Currently, Balance Farms is actively growing. They supply microgreens to area restaurants and local grocery stores and harvest produce in the morning for their Toledo-area restaurants to serve that day. Their new menu, which debuted at the end of May, is ripe with crops from the farm, fulfilling their promise of farm-to-fork meals.

Despite the progress, PK still spent much of the tour discussing other plans that Balance Farms has for the future, including educational tours with the Imagination Station, utilizing the vertical space on the walls to grow edible flowers, continuing this concept at their other restaurants, as well as ideas that CJ, Balance’s culinary lead, is excited about.

“CJ can do so much more by having his hands on a farm,” PK says, adding that many of their favorite Asian ingredients, like kaffir lime leaves, are only available in the US in a shipped frozen form. “He’s already talking about growing his own specific kind of pepper to go in the Bang Bang sauce so that no one can duplicate the recipe.”

Balance Farms is showing how urban agriculture can grow business and community. And, at the end of the day, Balance Farms won’t be graded by its carbon footprint or how innovative the design is. Instead, success will be measured by what the farm can produce.

PK explains it bluntly— “We can grow a f*!k ton of food.”