Meet the prolific D.C. punk who planted roots in Toledo

Jeff Nelson is a punk rock legend, perhaps the world’s foremost expert on Jeep Wagoneers, a staunch pacifist who happens to be an expert on military history, a community hero who helped save Scott High School from the wrecking ball, and an unofficial ambassador for the Old West End.

But all Nelson ever sought was a place to call “home.

“So what do you want to talk about?” asks Nelson, taking a delicate sip of hot cocoa as he settles back on a well-worn couch. It’s a loaded question because knowing where to begin when interviewing him is a daunting task. So let’s start at the beginning.

He was born in South Africa in 1962, the middle child of a father who worked for the State Department. He recalls a childhood with moves to diplomatic posts in faraway locations such as Iran, Hungary and Afghanistan. During America’s bicentennial year (1976), 14-year-old Nelson moved to the States, living in the D.C. area, but not before all of the time spent in foreign lands left an indelible impression on the introverted young man.

“Most of my early life was moving every two to three years, which was a lot more formative than I realized,” said Nelson. “Most people who grow up in that kind of environment either have wanderlust or they end up really wanting to plant roots somewhere. I wanted stability and roots.”

It was around the 10th grade that Nelson met a fellow misfit named Ian MacKaye in his German class. The duo, after being introduced to the raw, rough, and raucous new sound known as punk, decided to form a band. After a few starts with groups called The Slinkees and The Teen Idles, with MacKaye, he formed a new outfit with a name suggested by Nelson—Minor Threat. As they became a part of the D.C. punk scene, they didn’t know that the band would be etched in the annals of American music history. The duo also founded the record company, Dischord Records, which just celebrated its 39th anniversary, revered as one of the great underground music labels of all time.

While Minor Threat and other D.C. punk luminaries such as Bad Brains and Henry Rollins, who would later join L.A.-based group Black Flag, were creating a bona fide music scene in the nation’s capital, Nelson experienced Toledo for the first time. His band played in Detroit and they ended up crashing at the house of Corey Rusk of Maumee, a member of the great Midwest punk outfit The Necros. In 1981, Dischord Records released a 7-inch record of The Necros, Nelson’s first time doing business in the Toledo area.

A lot of people like Jeeps, and many favor the Wagoneer line. But not to the extent that Jeff Nelson favors them. As a kid, he was never into cars, but there was a guy in his neighborhood who had a Jeep Wagoneer, and Nelson became obsessed. “I loved the Wagoneer because it reminded me of a Tonka toy. I just loved its rugged simplicity.” That love of Wagoneers, combined with a love of old Victorian houses, led Nelson to move to Toledo.

While still based in the D.C. area, living a quiet life running Dischord Records and doing graphic design work, just before his 40th birthday, Nelson learned of a 40th-anniversary celebration of the Jeep Wagoneer in Colorado. Instantly, he decided to attend and he drove with a friend through Toledo on their way to the Centennial State. They took time to visit the Jeep plant and the Toledo Museum of Art (“The art museum is definitely one of the reasons I moved here,” Nelson explains.). And while at the Museum he started talking to a woman who worked there.

“I asked her questions that I had asked in many cities across America over the years: Are there any cheap Victorian houses around here? She looked at me like I was kidding and walked me to the window and pointed towards the Old West End.”

Nelson and his friend drove through the historic neighborhood. And he fell in love with it. Fast forward several years and after house hunting, Nelson found himself trucking six vintage Jeep Wagoneers from D.C. to Toledo. “I’d always wanted a big Victorian house. Plus, with my love of Wagoneers, it just made sense. Toledo was home.”

An obsession that is uniform(s) 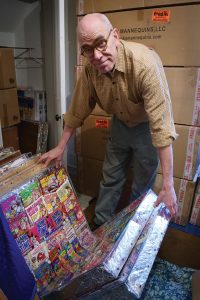 Of his many collections, one of Nelson’s proudest (and most
massive) is chewing gum, which is believed to be the largest collection of chewing gum in America. PHOTO CREDIT: KELLI MILLER

Nelson is a collector. But not like most people. Sure, he’s collected “normal” things like comic books, beer cans, Topps’ Wacky Packages trading cards to even chewing gum (it’s believed that Nelson has the largest collection of chewing gum in America). But then there’s his military uniform obsession. You wouldn’t expect a pacifist to be an expert on military history and have an extensive collection of World War I artifacts, but then Nelson is not what you would expect in a number of ways.

“Oh, it’s totally bizarre. I admit it,” he says, eyeing a mannequin in his living room dressed in a German World War I infantryman uniform. “But I just love military uniforms. I hate blind patriotism, but sharp uniforms are sharp uniforms.” In addition to a wide collection of vintage military uniforms, Nelson has another specialty collection: German military children’s picture books from 1870 to 1918. “I just love the illustrations and the stone lithography,” says Nelson, matter-of-factly. “At the time, Germany had the best printing in the world.”

Talking with the guy is like conversing with one of those scholars you see on The History Channel. He can recite for you a treatise on any American war, which incidentally, is why he’s a pacifist.

He’s studied extensively why countries fight and he’s convinced war is just plain stupid. “As complex as World War I and World War II were, these wars were so short compared to these f**king endless wars we have now,” says Nelson, draining his mug of cocoa. “I’m amazed at World War I. They should have known better. They just stumbled into war. They should have known just how f**ked up mechanized war was going to be. And it was.”

A self-described “political junkie,” Nelson is a sponge of news and current events, constantly soaking up as much as he can about the world. And while the general populace has mostly moved on from thinking daily about the warfare going on in Iraq, Nelson hasn’t forgotten. In fact, it’s the defining characteristic of his Old West End house. 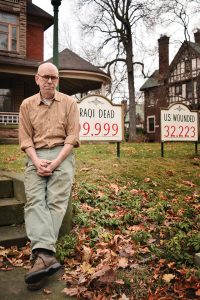 Nelson put the signs up shortly after first moving to Toledo 15 years ago.

Unsurprisingly, he has received some grief over the years from the Fox News-watching part of the population. One ‘Murica-loving gentleman once got out of his truck and attempted to destroy the signs with a baseball bat. But in recent years, the signs have gotten a different kind of response.

“Over the years, I’ve had tons of veterans thanking me for having (the signs) up,” says Nelson. “Before, some people saw it as disrespectful, but now people seem to mostly understand the message.”

The signs make Nelson a controversial figure in the Old West End, even with people who understand what he’s doing. “I know there are people in the neighborhood who want to ask me, ‘Don’t you think it’s time to take them down? I mean, this is a historic neighborhood.’ But my answer is no, because I don’t think we’re out of the woods yet in the Middle East. I still think Iraq has the potential to blow up again. I keep my signs up because they represent the dangers of stumbling blindly into war and because of the loose talk of attacking Iran.”

Today Nelson is a long way from the gutter punk clubs of Washington, D.C. He still runs Dischord Records through phone, fax, and email and the company is doing pretty well for a small indie punk label. About 10 years ago, he spearheaded the effort to successfully save Scott High School, which ended up receiving a multimillion-dollar restoration instead of being demolished. In his personal life, he eschews social media and most convenient modern technology, though he’s recently become more open to text messaging. He runs Pedestrian Press that manufactures shirts and printed materials, and does graphic design work.

He’s also joined forces with Toledo JeepFest to promote his love of Wagoneers and hopes to help with the establishment of a Jeep museum. Nelson is a music legend living in plain sight; your friendly neighborhood eccentric. Now in his late 50s, he still has punk rock spirit—fighting for the underdog, commenting on social ills, and standing up for the city he believes in.

“Toledo is a medium-sized city with a small-town feel and some big-city problems. It’s a very cozy town. And I love it.”