“Are we going to be deported?”

That was the emotional question asked by refugees at an information session at the University of Toledo on Feb. 18. The presentation, “Immigration Under President Trump,” was hosted by Welcome Toledo-Lucas County (Welcome TLC), US Together Toledo and Advocates for Basic Legal Equality (ABLE). Attorneys from ABLE provided information on how the executive order, signed by the president on Jan. 27, affected immigrants and refugees entering the country.

The Jan. 27 order, commonly referred to as a travel ban, would not have directly resulted in refugees being deported, the attorneys said— it addressed individuals seeking admission into the country, not those already here. The refugees’ concern isn’t uncommon though, as the order caused confusion and uncertainty among the nation’s immigrant population.

“Fear still exists in the community despite the issuance of the [temporary restraining order],” said Eugenio Mollo, Jr., ABLE managing attorney. “The strongest thing I can communicate is that everyone living in the United States has certain basic rights under our US Constitution, regardless of immigration status.”

Mollo and the other attorneys advised all those in attendance who weren’t US citizens to avoid traveling outside the country, if at all possible. If another order is signed, those outside the United States may not be able to reenter. 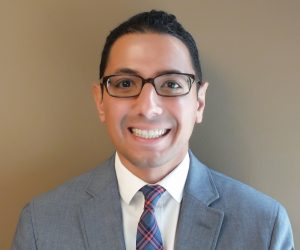 “When will I see my family?”

Several Toledo-area families were kept from each other while the travel ban was in effect. Some were refugees expecting to be reunited with relatives.

“Everything is on hold for our families,” said Corine Dehabey, program director for US Together. 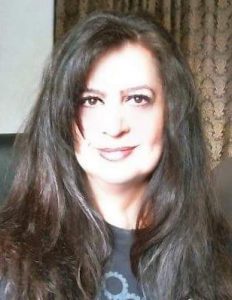 Dehabey said US Together has helped settle 211 refugees in the Toledo area since May of 2014, 172 of them from Syria.

Water for Ishmael is a Toledo nonprofit that works with local churches to help immigrants adjust to life in America, including teaching English to foreign speakers.

“[One student] had been waiting for years for her sister and nieces to join her,” said Janelle Metzger, executive director of Water for Ishmael. “They were scheduled to come the week after the ban was put in place, so the flights were canceled. She was devastated. Thankfully, the judge’s order created a window for the family to come, and they have been reunited.” 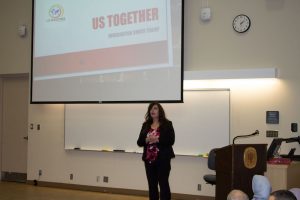 Corine Dehabey at the “Immigration Under President Trump” presentation.

Others affected were green card holders afraid to visit their families outside the country. Attorneys said the language of the Jan. 27 order was unclear and open to interpretation, which initially resulted in some green card holders— legal permanent residents of the United States— not being allowed to travel back into the country.

“[Customs officers] have all the discretion. They can decide they don’t like the way you look and not let you in,” said Mechelle Zarou, an immigration attorney with Shumaker, Loop & Kendrick, LLP.

Nour Barudi is a UT student and US citizen, but her parents are green card holders from Syria. Her father currently lives and works in the United Arab Emirates and returns to Ohio frequently to visit his family. During the travel ban, her family received word that her father’s Global Entry membership, which made it easier for him to get through customs, would be revoked. Fortunately, the action didn’t go through before the ban was lifted.

“I’m thankful that [the ban wasn’t] too detrimental to my family, but it still makes you feel like an outsider. It makes you feel ‘othered,’” Barudi said. She’s worried about other orders the president is expected to sign in the future, too:

“I am worried about it, but the ban showed that the judicial branch is willing to fight back.”

“When the US District Court Judge and the 9th Circuit acted [blocked the order], that basically said that no one is above the law in the United States, not even the President,” Mollo said. “And that is a wonderful testament to our Constitution and our legacy as a nation of immigrants.”

In light of the executive order and future actions alluded to by Trump, many in the Toledo community are working to make immigrants and refugees feel welcome and safe. The Lucas County Commissioners passed a resolution reaffirming the County’s commitment to being a safe and inclusive community for all residents. The City of Toledo then passed a similar resolution.

“I think that sets an important tone,” said Brittany Ford, project manager with Welcome TLC. “It was a very powerful event (for the residents at the City Council meeting).” 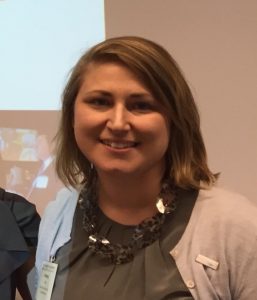 Ford said the City is also a member of Welcome TLC’s steering committee, which works to highlight the value immigrants bring to the Toledo community and make them feel welcome.

“We’re very proud of our community for being so welcoming,” Metzger said after the resolutions were passed. “Our experience with refugee families has been so positive. They are grateful for a chance to live in peace and give their children a future. They are eager to learn English, provide for their families and give back to the community.”

In addition to the resolutions, local organizations continue to do their work to help the immigrant community and keep them informed. ABLE has held multiple presentations about the travel ban and what residents can do to become US citizens. Welcome TLC, US Together and Water for Ishmael facilitate events to help members of the community get to know their immigrant neighbors. These include welcome dinners and conversation partnerships between native English speakers and immigrants.

Ford and Dehabey encourage anyone wanting to make a difference to get involved in one of these programs.

“We need volunteers now more than ever,” Dehabey said.

Barudi said the travel ban reinforced the feeling that the country holds animosity toward her family and other Muslims because of their faith.

“It doesn’t feel so great to feel like your beliefs are un-American, or to feel like your life is threatened just by something you choose to wear on your head,” she said. “I encourage people to embrace each other and embrace diversity, and to encourage it.”

Follow ABLE, US Together – Toledo, Water for Ishmael, Welcome TLC on Facebook or visit their websites for information on ways to get involved.

For information on citizenship for immigrants
or how potential future executive orders
may affect immigrant families,
contact ABLE at 800-837-0814.