Laith Al-Saadi, finalist on NBC’s singing competition, The Voice, can’t say much about the experience due to the all-inclusive non-disclosure agreement they had him sign before he could participate.

He can’t tell you what his coach, Maroon 5 frontman Adam Levine, is like offscreen. He can’t tell you why he chose to sing “The Letter” by Joe Cocker for his audition. He can’t even tell you the name of the hotel where he holed up in Los Angeles for four months during the filming. But that’s okay, because the 38-year-old Ann Arbor native’s story is so much more than his success in the televised singing competition..

Al-Saadi can say that he does not regret that he didn’t win The Voice.  Had he been selected the winner, the recording contract that would have resulted  likely would have taken him away from Ann Arbor, a town he loves. And that is what really defines this long-haired, long-bearded guitarist with a voice built for the blues: he genuinely has an affinity for the Midwest. You won’t see him uprooting to L.A. or New York or Nashville; he’s now making the music he loves on his own terms. But don’t take it from us.

So what’s your story?

I started singing when I was about 4-years-old. And grew up singing and doing theater productions in Ann Arbor. Then I started playing guitar when I was 13. My jazz band at school wanted me to sing for them, but, long story short, I had to learn to play an instrument. At14, I formed a blues band called Blue Vinyl and we ended up winning this rock competition in Ann Arbor that was not for younger bands. We actually got to start playing in bars. When I turned 16 and got a driver’s license, I quit my job and have not had a real job since.

What is your background ethnically?

I was born and raised in Ann Arbor. My father is from Baqubah, Iraq. He moved here in 1957 and met my mom when they were going to school at the University of Michigan. My mom is from Beverly Shores, Indiana. 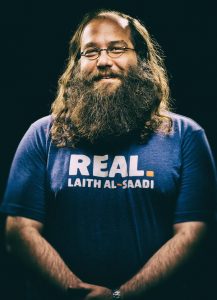 I did before The Voice, but now I can’t play for five nights a week for free and then still expect people to buy tickets to come see me. I literally had five or six regular gigs plus I’d take stuff during the day. I was just a working, jobbing musician. Now, fortunately, I have the opportunity to play my original music in more concert-like settings. I play a little less often but I consider it much better work.

Over the years did you play in Toledo?

I used to make it down to Toledo when I was coming up, playing blues. I used to play with a harmonica player out of Toledo named Johnny Reed. And I got to play down at Mona’s Riverview Lounge and Auggie’s… I don’t think those places are still open. Also, Rusty’s, I went there when I was learning to play jazz as a teenager.

How did you get to participate with The Voice?

They reached out to me. I had it suggested to me that I do The Voice by tons of people, and I didn’t really watch the show much; I had heard stories of performers waiting around for two or three days to get their audition and I said, “I’m not going to cancel gigs to do an audition for The Voice,” and then I got an email from a casting agency and a VIP slot for an audition.

Do you plan on staying in Ann Arbor?

I do. To me the idea of regional talent is really important and I grew up in a community that values the arts and has had a lot of great artists come from here. I think it’s very important to stay and contribute to that scene. I think when artists are forced to move to L.A. or Nashville or New York, they kind of get homogenized into whatever the popular things are in those scenes, and I feel that one of the things that makes me unique as a performer is that I am greatly influenced by the music of Detroit and this area when I was growing up.

What local artist do you admire?

There are so many— Bob Seger and Iggy Pop, certainly a lot of jazz artists that came up before I was born. Ron Carter, who played bass for Miles Davis and the Jones Bros. Elvin Jones played drums for John Coltrane and Hank Jones was one of the great jazz piano players of that era, and Thad Jones, who was a great trumpeter and led the Thad Jones/Mel Lewis Big Band Orchestra. Also, one of my favorite guitarists, Kenny Burrell was from here and went to Wayne State.

You opened up for Lynyrd Skynyrd recently— was that your biggest gig?

What is your ultimate goal in music?

I want to achieve the freedom as an artist to do what I want to artistically and put it out there at the level that I direct.