The future of Bancroft: Beal Properties acquires Church of the Living God 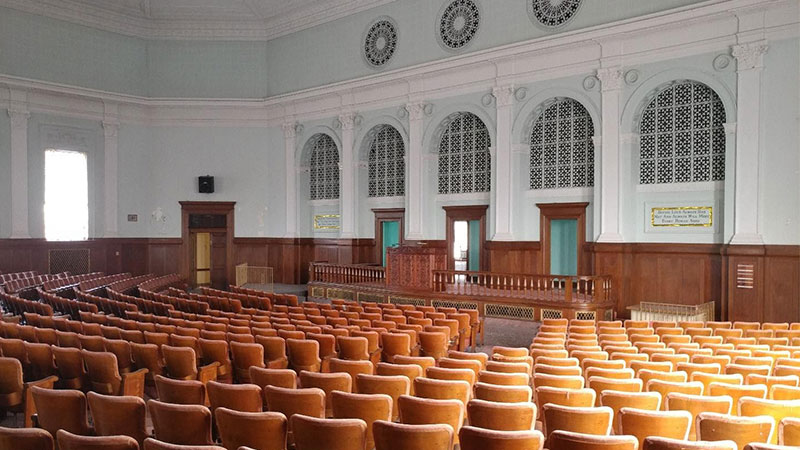 Along Collingwood Boulevard, formerly known as the Avenue of Churches, in Toledo’s historic Old West End, half a dozen magnificent churches stand. They were built over a century ago, during the height of Toledo’s economic prosperity. But despite their majesty and charm, these structures— like so many of Toledo’s historic buildings-– are vulnerable and falling into disrepair due to decades of shrinking population and economic decline.

Among these structures is the former Church of the Living God, at the intersection of Collingwood Boulevard and Bancroft Street. Built in 1921, it is notable for the massive stone ionic columns that adorn its front. The building was originally home to the Second Church of Christ.

In 1995, the structure was sold to the Church of the Living God, which operated in the building until 2013. A dispute with the church’s national office led to the local congregation selling the building to a pair of Canadian investors. The site has since been vacant.

Investing with a (Re)purpose
Early in September, Stewart Beal, owner of property management firm Beal Properties, announced on Facebook that he had acquired the building for $125,000, and was seeking ideas on what to do with it. A sign with the Beal Properties logo was placed on the corner advertising the availability of commercial space.

For some, the purchase was a sign of relief. Cosmetic changes, like the removal of a broken sign that was damaged by a runaway ambulance in 2011, were welcomed by neighbors who felt that the property was becoming an eyesore. But others expressed concern. Was Beal the right developer for such a historic building?

Known primarily for its residential rental properties— many of which are low-income— Beal manages over 1,500 units in Toledo, including two four-story apartment buildings adjacent to the church. The condition and maintenance of those rental units has led some in the neighborhood to criticize Beal.

Opinions vary
Among the critical is Sue Postal, who chairs the Old West End Association’s Preservation committee. “Beal has not reached out to us, and the sheer lack of communication about his plans for the building makes us question if he’s really interested in doing what’s right for the neighborhood, or just what’s right for his wallet,” Postal explains.

However, in a neighborhood that is almost entirely residential, the redevelopment of commercial property is seen as an opportunity. The possibilities for converting the former place of worship into a commercial venue have sparked lively discussions. Comments on the Old West End Facebook page muse about how the church could be converted into a fantastic concert venue or theater, maybe a banquet hall or wine bar. But while ideas flow steadily, ideas backed by funding have been in short supply.

As of September 28, the Lucas County Auditor’s office had not recorded any sale of the property by the Canadian investors who acquired the property in 2013. The auditor’s office also shows the property as being zoned residential— so any commercial development will likely require a zoning change application with the City.

Recently, Javier Sastre, Beal’s commercial property specialist, allowed Toledo City Paper to tour the building. Much of it seems to be in good shape; the worship area and adjoining offices are dusty but otherwise ready for use. Some debris littered the common areas, and the basement was off limits due to a thin layer of water that is being addressed.

Sastre related that since putting up the sign, Beal Properties had received a number of calls— including from professionals interested in sectioning off part of the building for their office and from church groups seeking a place to worship. Sastre stated that Beal is willing to work with all of them— especially if they can assist with financing some of the renovations.