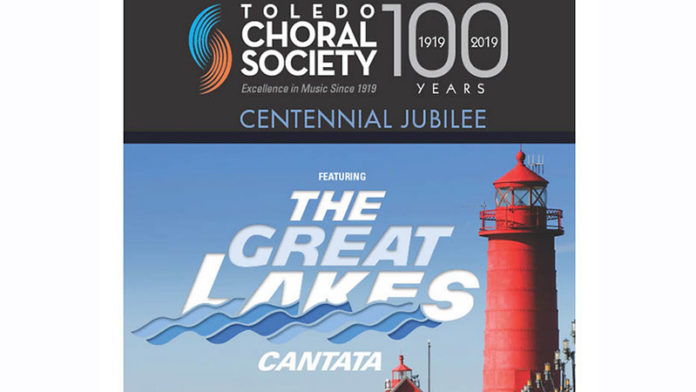 Two anniversaries will be commemorated on Sunday, June 26 as the Toledo Choral Society hosts its Centennial Jubilee at the Toledo Museum of Art’s Peristyle Theater. The Society will celebrate 100 years of bringing beautiful music to the area while Richard Napierala, the Society’s Artistic Director, with the group since 2012, marks a decade of his own contributions to the legacy.

“Before I took over as director, the Choral Society focused more on large oratorios and masses,” Napierala said. “They would do probably two concerts a year, now we’re doing four to six.”

Featuring nearly 100 members from the region, the Toledo Choral Society has performers with a wide variety of ages and backgrounds, united in performance. The Society is most famous for its annual tradition of presenting Handel’s Messiah every Christmas season, but its impact on the Toledo music community goes back even further than that. “We are Toledo’s oldest continuing music organization. Their roots go back into the 1800s, where it was the Toledo Oratorio Society. It eventually became the Toledo Choral Society in 1919.”

Delayed jubilee
The June 26 concert is celebrating the Society’s 100th anniversary (it should be 103 years) as the global pandemic forced the Centennial Jubilee to be postponed from its original 2020 date.

“We did have a period of time— I call it ‘the dry spell’— where we weren’t able to rehearse. But through Zoom and virtual choirs, we continued to work on the music, we continued to send out practice tracks,” Napierala explained.

Napierala admitted that when the Society began to come back together in person for rehearsals and performances, he was concerned about how many would return. He needn’t have worried. “The people came back in full force, and they’re excited about doing this,” he said.

Brand new music
To commemorate the Centennial, the Choral Society commissioned a new piece, The Great Lakes Cantata, to be performed at the event, written by nationally renowned composer and educator Gwyneth Walker. Napierala said that Walker has been very hands-on with the Society as they have prepared for the debut of the Cantata. “It’s been great working with Gweneth Walker, because she has been accessible to us. She has come to visit us several times, she listens to the chorus, make sure she would tailor the piece to our group,” he said.

“Not only is it going to be a Centennial Jubilee piece for the Choral Society, but it’s also going to be something that, historically, gives back, because it’s going to be a piece that lives on and tells about the local area that we live in.”

Helping through music
Giving back has been a consistent theme of the Society throughout its history— and a big reason why the group remains a central pillar of Toledo’s musical community. “One of the concerts that we planned, raised money for a scholarship at the University of Toledo. At our Christmas concerts, we’ve always done a freewill offering, but the price of admission has been to bring canned goods that we give to homeless shelters,”
Napierala explained.