Growing Toledo is a hands-on experience 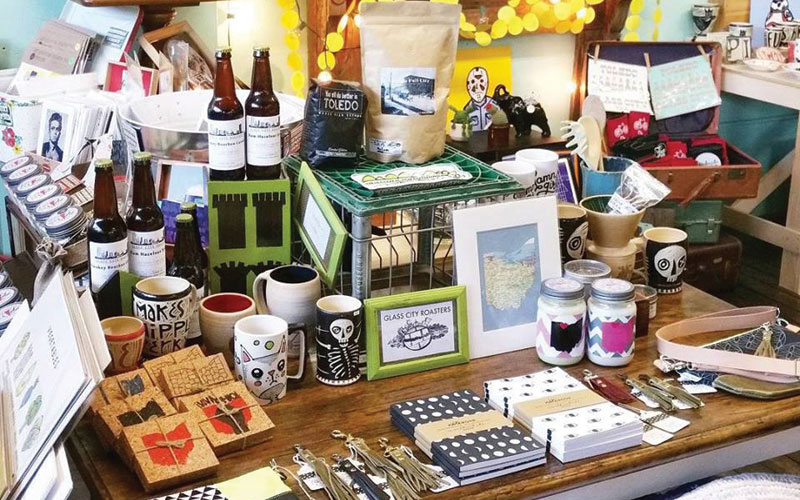 I’ll confess. I grew up in Toledo, moved away for college, and echoed a sentiment many friends I spent my youth with shared: “I’ll never, ever live in Toledo again.”

Well, I’m back. I’ve been back. And while moving back felt like I had failed at my chance to use the proceeds of a hummus-in-a-mason-jar business to pay 2k for rent in a Brooklyn warehouse space with 10 other people, I really, really don’t mind.

Moving back to my hometown wasn’t a failure because Toledo isn’t a failure. Just like all the passionate creatives of Toledo know: this is a great city to make art. Unlike my friends in Portland who are struggling for a gallery show, Toledo welcomes enthusiastic makers with a pat on the back, a beer of their choice, and encouragement.

This past holiday season, some of my 419-native friends who have relocated to luxury cities like “da Bay Area” and goddamn London came back to town. After awkward conversations at the bar, where I was consistently assaulted with the question, “wait, what are you still doing here?”, I decided to confront the people who treat Toledo like a large truck stop with a taste of the T: I took them to the newly-opened Handmade Toledo Maker’s Shoppe and rolled my eyes as theirs widened.

From URL to IRL

Entering the shop can be a surreal experience for a newbie. Surrounded by tiny drawings in handmade frames, ornate hair clips adorned by seashells, Nag Champa beard oil, and other accoutrements of my serious DIY-envy, Handmade Toledo feels like a real-life Etsy. With a specific aesthetic and art only by local or regional makers, and less than a year under its belt as a permanent Shoppe, Handmade Toledo offers something permanent and special. “It’s not just coming to Shoppe— it’s a whole experience. You’re buying something from the person who made it and they care about it. You’re getting something unique,” said owner, Jessica “Oh Sew Betty” Crossfield, proudly.

To keep the Shoppe’s aesthetic cohesive, Crossfield uses a jury process to assess the online submissions. “I can tell when someone has made something that they made it with their heart in it,” said Crossfield. “Our makers aren’t hobbyists. A lot of times the people we have, this is their job. This is their life. This is their bread and butter. And you can tell that by the branding and quality.”

Handmade Toledo is as much a business as it is an initiative to show off how cool crafts really are. Starting with a semi-annual, indie craft fair called “Maker’s Mart” in April of 2012, Jessica “Oh Sew Betty” Crossfield has wanted to draw together Toledo’s scene of makers.

“I’ve been doing indie craft fairs for Oh Sew Betty [my personal sewing business] for years. I was always traveling because they were never in Toledo,” said Crossfield. We’re all artists here and there’s a huge community, [but also] a huge void, so I thought we could do it.”

Two years later, Handmade Toledo opened a brick-and-mortar that would allow the spirit of DIY fairs to be available five days a week. Opening on 1717 Adams Street, in the building that hosted both the first Artomatic 419 and the first Maker’s Mart, the Maker’s Shoppe’s grand opening coincided with their November 2014 Maker’s Mart.

“We opened relatively quickly,” said Crossfield. “I’ve always wanted a space where we could have Maker’s Mart, my studio, a year-round handmade gift-shop with the same style, studio spaces and a classroom. I’ve been saying that for years and this building was available and the universe was telling me it’s time to do it. It’s been even greater than I’ve ever imagined.”

Since Handmade opened, the bright, DIY style has permeated both the product choices and the interior. “I was looking at Instagram photos and saw pictures of us scraping up the tile on the floor 45 weeks ago,” said Crossfield. “Our woodshop opened immediately because we built the floor, shelving and tables. We’re always tearing apart old pallets and making things— sometimes we just need a new table for our house or a shelve for the shop. Matt Taylor made all of his pieces for Artomatic here. We’re just constantly building things.”

Stay tuned, and get excited, to shop from over 80 vendors during the upcoming Maker’s Mart on Saturday, November 14.