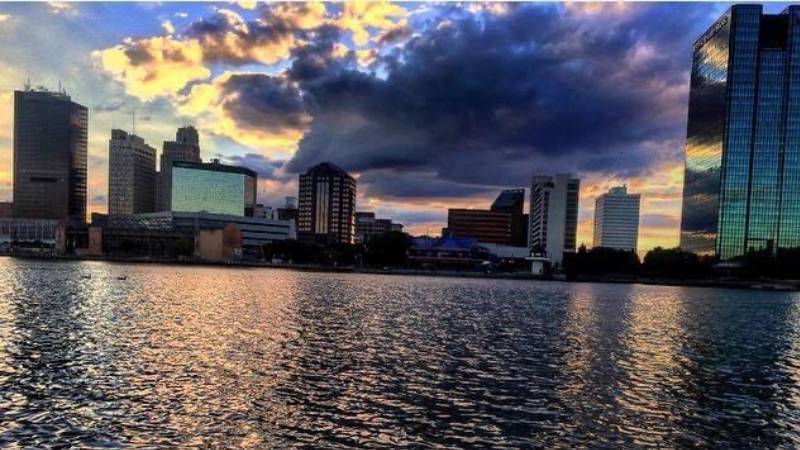 Phillip Callahan is a changemaker. Self-taught by long hours with the natural instincts of an artist, his unplanned photography garnered national attention for Toledo’s Black Lives Matter events last summer, as did his first photograph of the cityscape he calls home.

Callahan started OwlVision LLC, making a name at music concerts while networking in Detroit, Chicago and L.A. His brand represents perseverance and grit, and his dream is to take that view worldwide. When Callahan isn’t filming, editing or creating, you can find him collaborating to Feed the Hungry, giving back to Toledo and breaking new ground.

I have a tattoo that says “Be the Change”
“I grew up in a troubled home, so it wasn’t easy. I went through hardships, I dropped out of school for a year. My family just didn’t have these types of (creative) things going on. Basically. I’m the first one to own a business…I’m the first one to graduate. ‘Be the Change’ just kind of stuck with me, and it’s been my motto ever since then.”

I used to take pictures with my iPhone 5s.
“One of my pictures I took of Toledo, back in 2013 or 2014, kind of went viral. It had over 200 shares and was all over people’s Facebook covers. Me and my buddies went to a concert in Cleveland and (one of them) just passed me the camera one night and I went and took photos. And sure enough, I wake up the next morning and the photos I took are on their Instagram pages, and they were tagging me and it just kind of stuck from there. Later I ended up becoming close with the artists, and it’s been a great journey since then.”

I took that risk of being self-taught and it’s paid off.
“It’s definitely been a journey with a lot of long nights. I got accepted to L.A. Film School and literally, two weeks later, I ran into (musical artist) G-Eazy’s photographer, his cameraman. And he was telling me ‘It’s not worth it. You can learn everything you need to know off Google or YouTube’. At first, I was skeptical of the advice,  I didn’t know if this man just didn’t want to see me succeed,  or what. But I ended up listening to the advice and sure enough, here I am. You know, at the time I was a nobody, literally I had a couple of supporters.”

I didn’t go up there to take photos…
“I went up there to make a voice, make a change. My photo I took for the Black Lives Matter get together was the most powerful. Like I said, I didn’t go (to the gathering) to take photos originally, but I had all these people telling me ‘take photos’ and ‘capture this moment in history’. That photo went viral. And 13abc actually gave me a segment. It (the photo) was on CNN and ABC…I wasn’t expecting that.”