October 6, 2020, the first day of Early Voting in Ohio. After consulting the early voting hours the day before, I park in a lot off 13th Street. Someone hands me an Earl Mack for Lucas County Sheriff flyer on my way in. I grab my book and walk past the front entrance of Ohio Means Jobs building (1301 Monroe), along the line that measures the length of the 14th street block to Monroe.

A woman and some guy carry Trump flags. Another man holds a Biden Harris yard sign above his head and waves to traffic on Monroe. Eight or ten other people stand with Biden signs around an SUV in the parking lot across 14th, the parking lot with the lonely Key Bank drive-thru ATM. I hear two of the Biden people start a chant of “Vote Him Out” that quickly fizzles. 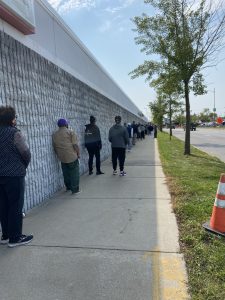 The line down the block, about 75 minutes from casting my vote. (Credit: SF)

It’s 1:54 p.m. I have been in line for 20 minutes by the time I’m standing beneath “The Source” sign on the side of the building. The book I brought along keeps me occupied until I reach the corner of the building, about 15 yards from the entrance. By this point, yellow social distancing markers spaced roughly six feet apart appear on the concrete sidewalk. A man waves me through the front door when it’s my time.

Inside, a woman seated at a folding table takes my temperature with a trigger-operated thermometer. She has hand sanitizer arrayed on the table for anyone who wished to use some. 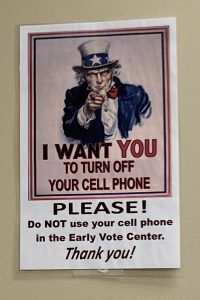 No phones: Uncle Sam’s orders. Though that didn’t stop people from scrolling in line. (Credit: SF)

Down the hall, around a corner, into another, more beige, hall. I wait and hear a man tell the woman in front of him that his ID is due to expire in November.

“When’s your birthday?” the woman asks him.

Another man, about three parties ahead of the birthday boy, says, “Me too!”

The first guy says, “Small world! Respect.” And the line keeps crawling. It has been an hour already, an hour to make it to the room housing the check-in station.

A Visqueen plastic maze has been erected to guide voters to the check-in table. There are four or five stations, staffed by two people per.

The older poll worker who calls me to her and her partner’s station asks for my ID. When I pull out my passport, she says a passport won’t work. Per the voter ID requirements, “photo identification must show name and address.” I show her a bank statement, which she says will work. Then she asks my name and then my address. The woman helping the woman checking my registration on the computer hands me a truncated boba tea straw (“to press the buttons on the machine with”), a sanitary wet wipes packet, the coveted “I Voted” sticker, and a long strip of paper with my name freshly printed on top: my ballot.

I take my place in a shorter line before a voting machine frees up. I slide the paper ballot strip in the machine’s ballot slot and the screen asks me who I want to choose for the presidency. A prominent candidate’s name is on the top right. The incumbent’s name is on the bottom left, beneath a couple third-party tickets. Diametric opposition.

Tap the green arrow on the bottom right corner of the screen to vote for each ballot item. Multiple judges are running unopposed. I briefly entertain the idea of running against one of them. I end up voting for all of the unopposed judges.

The machine asks me if I would like to print and review my ballot before casting it. Because I have been conditioned to question the validity of the voting process, I print my ballot to review it. Everything looks OK to me.

I take my ballot to another machine and insert it. When the machine asks me if I would like to cast my votes, I click yes.

In the rear hallway, I notice the conspicuously absent “I Voted” selfie station present during the 2018 midterm election. On my way out, I walk past a woman filling out an absentee ballot from her car window, an apparent example of curbside voting.

At 2:49 p.m., I tabulate the time that has elapsed from when I took my place in the back of the line to when I leave the building after voting. The early voting process during a pandemic takes me 75 minutes.

Outside, I walk to the center medium on Monroe street, planted with trees and more Biden Harris signs. I talk to a man waiting for the bus. He tells me about how he was addicted to crack, how much money he made off crack, how he went to jail for eight years when they tried to give him 20, how the lord had blessed him, how he’s working in HVAC now, doing well for himself.

When he excuses himself to catch his bus, we bump fists. And when he makes it to the bus stop, the TARTA coach pulls away without him.