A journey of hope, healing and redemption is at the core of Violet, a musical that will be presented at the Croswell Opera House in Adrian, MI beginning July 12.

Originally produced off-Broadway in 1997, the show follows the story of a disfigured young woman traveling by bus to a faith healer she hopes will be able to change her face.

“This is a story which is about a woman who has a facial scar, an external scar, but she also has some internal scars,” said Croswell director Jen Letherer. “It’s a really thoughtful story, it has really beautiful music and really strong characters. And I think when people leave the theater, they are going to have recognized something in themselves.”

“There’s something for everybody,” said Jamie Lynn Buechele, who will play the central role of Violet. “It’s very relevant for folks who are following along with current events. The show takes place in 1964, and I just think it’s amazing how relevant the information that they discuss, the topics and situations that arise in Violet—- how relevant they are to today. It’s actually both sad, and cyclical. And I think that’s very representative of life.” 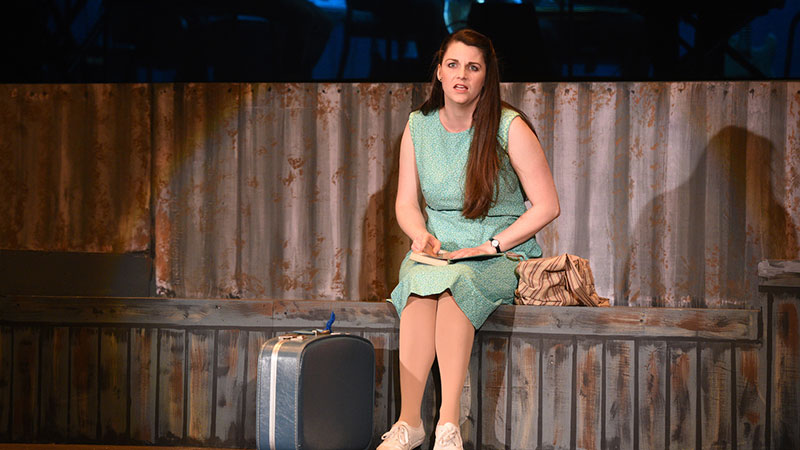 Jamie Lynn Buechele, prepares to leave her home in North Carolina in a scene from “Violet” at the Croswell Opera House. Photo Credit: Vicki Schmucker for wePhoto.

Buechele has had a long and emotional connection to Violet, first seeing it in production at Oakland University over ten years ago. “It was beautiful. I cried several times during that show, it was deeply moving. And I left humming the song that was so stuck in my mind. And I said, ‘I have got to play this role someday.'”

Letherer, who has directed several productions for the Croswell over the years, said she noticed a similar level of passion for the material from many of the people who auditioned earlier this year.

“As soon as we started, we actually kind of started small, with the principles, because a lot of our people were involved with other productions. And those principles really kinda just gelled— especially the three leads,” Letherer said.

Buechele noted how one thing she hopes most every audience member can take away from this story— regardless of what they get out of the production— is a better sense of empathy.