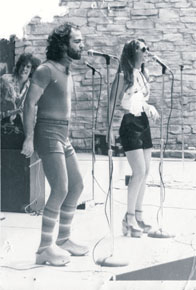 The local music scene says a lot about a town. Some are torn, some are dying, and some, like Toledo’s, hold together a community. This is a tribute to the movers, shakers, innovators, fans and venues which make the local music uniquely ours.

“Oh, The Palladium.” says Don Binkley, with a coy smile, “It was wild.”

Steve Athanas, former member of Strongheart, The Raisin Band, and currently of The Homewreckers recalls the same rock palace. “There was this place on Secor, where the UT campus is now, right before Dorr, The Palladium. It was this big posh room. It used to be a bathhouse. We used to bring girls back there and…grrrr. I remember the DJ had this crow’s nest; he had to climb up a ladder and he had a little port that overlooked the whole club. It was cool as shit, although I don’t know how much the DJ liked climbing up there every night.”

Binkley and Athanas are part of a solid tradition of Toledo’s blue-collar musicians, working hard every night to provide quality entertainment for little compensation beyond love of the craft. Binkley is a local music legend whose playing days span thirty years. He can still be seen around town with his longtime duo, the Dan & Don Show. He remembers when neighborhoods around the city had their own miniscenes. Several venues would compete for bookings, and at one time the area around the University was an environment of musical variety with clusters of live music within walking distance.

Every generation of local musicians and fans can reminisce fondly about their favorite venues to play or the best place to see a show. Fathers and sons can swap stories from the different incarnations of the Zodiac. The Incinerator used to be hopping on any given night. Many married couples met at one of the Benny’s locations—North, South or East. Springsteen played The Agora before he was “The Boss” and who knows how many mothers used to go-go dance at the Hullabaloo. Cyprus, Heads and Tails, and the original Ottawa Tavern were second homes to many local musicians and music fans.

“There must have been a couple hundred bars in town. People were rocking not only Friday and Saturday. We were playing five to six nights a week,” Binkley said. “There were a dozen bars all along Sylvania Ave. where you could catch all different acts.” 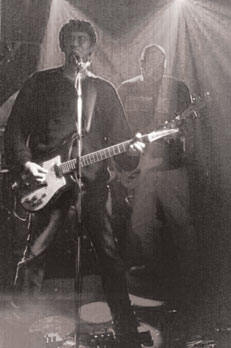 As local music evolved so did the local haunts. Dan Gruenke from the popular The local music scene says a lot about a town. Some are torn, some are dying, and some, like Toledo’s, hold together a community. This is a tribute to the movers, shakers, innovators, fans and venues which make the local music uniquely ours. 90’s group, Glide, has fond memories of headlining at Frankie’s Inner City, the east side’s rock Mecca. “My favorite place was Frankie’s because they treated us like celebrities,” he says, “It would be Frankie’s on a hot August night, sweaty, packed to capacity and 110 degrees; people passing out from heat exhaustion. You could smoke at the bar so it would be smoky, sweaty, smelly, with a stumbling loud crowd surfing.”

Johnny K. of Boogie Matrix Mechanism, a promising local jam band together since 2005, recalls seeing some bands which inspired him at Frankie’s. “When I was younger the nu-metal wave swept through here. Fringe was a big band, Lollypop Lust Kill and Hearsay, which is now We Are The Fury. Frankie’s downtown, that scene was big; it was happening back then.”

Youth may be everyone’s glory days. Have Toledo’s rock n’ roll glory days passed? The old timers of course paint a nostalgic picture of the music scene of their youth, but where is the new scene? “I would like to see more clubs in downtown Toledo base their income on live music and have people generally support it,” says Johnny K. “Although karaoke and clubs arefun, I think there is a lack of support for live music in general downtown. People need to get out and check out live shows; see what all is out there in Toledo.”10 March 16 • March 30 www.toledocitypaper.com

Go anywhere in the world and you won’t find another kind of music like the blues,” Calvin Bell, guitar player and lead vocalist for the Toledo-based blues band, The Good, The Bad, and The Blues, “It’s where every style of American music has its roots. Rock, soul, rap, funk: it all started here.”

Bell and his bandmates recently returned from a trip to Memphis, Tennesse to represent the Black Swamp Blues Society in the 2011 International Blues Challenge, a four-day festival and competition attracting premium talent from affiliated blues societies in forty states and thirteen countries. “I had no idea,” says Bell. “I didn’t understand just how huge it was until we got there.”

Bands are divided into several bars and clubs, and compete in 20-minute sets. Finalists go on to play The Orpheum Theater. “We put on a great show; one of the judges even hugged me, but my guitar strap ripped on stage. We lost points that we couldn’t make up,” recalls Bell. “But next year, nothing’s stopping us.” The Good, The Bad and The Blues were invited to an invitationonly jam session after the competition, booked a performance at the Montreal Jazz and Blues Festival this summer,and were asked to play in Poland in 2012.

Bell credits the band’s success to the musical diversity among its members. “Dale Roundtre, our bass man, he’s got a funk background. Our drummer, George “Junebug” Hendricks has played a lot of southern blues. Ronnie Nowak, who also plays guitar, has a history in rock. Then there’s me coming from Motown and gospel.”

Bell, who grew up in Chicago, can remember his first exposure to music at age three when his older sister brought home a plastic Elvis Presley guitar. He formed a funk/Motown band with his high school mates called the Marshall High School Band. “One week we’d go to school three days and play on the road for four, then the next week we’d do the opposite. We opened for Gladys Knight and Earth, Wind, and Fire. All of us got full rides to college; I went to Grambling College for guitar and marching band.” Bell has had the privilege of meeting and studying undersome of music’s most notable icons. “I got to hang around Grammy-nominated gospel artist Rance Allen, who’s from Toledo. I grew up across the street from Muddy Waters. My brother-in-law was Paul Williams of The Temptations. My full brother was even going to be a Temptation, but my mother wouldn’t let him. So I come by it honest.”

Bell became a businessman and relocated to Toledo, but about five years ago he felt the call to pick up his guitar again. He connected with the Black Swamp Blues Society. The BSBS, headed by LaVonne Kujawa, is in its 15th year supporting blues artists in NW Ohio and SE Michigan, bringing national acts to the area, and helping youth explore the blues. Each October BSBS hosts a local competition in two categories, band and solo/duo, as well as a youth showcase, to decide who will get to perform at the following year’s IBC. In addition to supporting numerous performances every week, BSBS hosts a local jam every Tuesday at Manhattan’s where young blues players can jam with and learn from established local musicians.

For more information on The Good, The Bad and The Blues, visit www.thegoodthebadandtheblues.com; for The International Blues Challenge, visit www.blues.org; for The Black Swamp Blues Society or to subscribe to their bimonthly newsletter, visit www.bsbs.net

Todd Rundgren was a hero to many in the late 70s and early 80s. But back then he was a musician that shone in two seemingly disparate areas of rock’n’roll. He initially came out as a balladeer, someone who could sing a song which brought tears to anyone’s eyes. Well-written songs like “Be Nice to Me,” “Hope I’m Around” and “Wailing Wall” -hell, the whole “Runt: The Ballad of Todd Rundgren” was an introspective lover’s album. But Rundgren could also rock out, straying far from the singer-songwritersensitive Todd.

One of Todd’s ardent followers was Rob Fetters, a Sylvania high school kid and a guitarist. Fetters not only loved the sensitivity of Rundgren’s lyrics, but his ears also responded to the sounds Rundgren got out of his guitar and keyboards. In 1974 Fetters started a band which became one of Northwest Ohio’s best The Raisin Band, touring up and down I-75, and eventually settling into the city of Cincinnati. Two other Sylvania-ites, Bob Nyswonger and Chris Arduser, eventually settled there also and joined up with Fetters. The boys then joined forces with Adrian Belew, renamed their act The Bears and became a trio known as psychodots one of the brightest spots on the Cinncinatti music scene.

Adding to an established repertoire

But even though the ‘dots may be sparse on the musical calendar, the fellas have other projects which add to the band’s repertoire. “There is no shortage of original material,” says Fetters. Not
only do they draw from The Bears and The Raisins, but Nyswonger has a solo CD out, Fetters has two and Arduser has two solo CDs and several others with another musical project, The Graveblankets (he has also just joined the newly re-signed Blessid Union of Souls). When the three of them come together, there is no better rock’n’roll music around (https://www.youtube. com/watch?v=RpuhMJymCjk for proof).

Now you may well be asking, what’s the correlation between Todd and the psychodots? “An old friend of ours has done a lot of photography for Todd’s band in the last few years,” Fetters explains. “He turned some members of Todd’s band on to the ‘dots.” One thing led to another, and Rundgren booked a date in Toledo and requested that the ‘dots open the show.

Opening for an icon

Rundgren’s camp told Fetters this alignment might boost ticket sales. “The first thing out of my mouth was ‘NO!’ Our hometown fans are not our biggest fans!” he says, laughing. “That’s why we
left town.” But Rob still holds an allegiance to Rundgren. “His album “Liars” is just great-full of fantastic, beautiful, powerful songs… I’ve always been a Todd fan.”