With crafts, drafts, bottle and cans, Toledo runs on beer. The ultimate beverage, we celebrate or drown our sorrows with it, and we can’t enjoy a ballgame without a cold one. It goes without saying that the local beer purveyors should be some of our favorite people (and they are). Not sure who’s slinging your suds? Here are some lager than life types offering the cure for what ales you: What are the best and worst beer name you have heard?
Best: Scary Jesus Rockstar by Dark Horse Brewing.
Worst: The Brown Note by Against the Grain Brewery.
What was your first beer ever? What was your first craft beer?
First beer: a Lazer Malt Liquor 40oz. Craft beer: Weihenstephaner.
What is your favorite type of beer?
Wheat beers of all kinds.
Where do you think the craft brew movement is going next?
Pickle and bacon beer.
What is your go-to beer?
The one within grasp. What is your go to beer?
Mango Jerry has been my go-to since we released it in June.
What is your favorite beer and food pairing?
Any IPA with spicy chicken wings.
What do you look for in a beer?
Flavor, body, and, as I get older, lower ABV beers.
How is your beer connected to the local area?
Maumee Bay has been around since 1995, so I get to hear stories from many in the community about their first craft beers coming from us, which is pretty cool! (Side note, if you see me in a bar and have one of these stories, feel free to have a beer with me and tell me all about it!)
How and why did you get into the beer industry?
Kind of by accident in college. I was placed at a beer and wine wholesaler through a temp agency. What a happy accident it turned out to be, because 14 years later I can’t imagine working in any other industry! What Is your go-to beer to drink?
An IPA, preferably Daisy Cutter Pale Ale by Half Acre.
What IS your favorite beer and food pairing?
A sour (beer) with street tacos.
What do you look for in a beer?
I love to support local breweries, so I enjoy trying new beers.
How is your beer connected to the local area?
We have teamed up with Maumee Bay Brewing Co. and create fun new beers with them, which you can find at all Mancy’s locations.
What is your favorite type of beer?
Gose (a sour, German beer). What is your favorite beer and food pairing?
I like SeaQuench Ale by Dogfish Head, it pairs great with our Ropa Vieja (a Cuban dish with shredded beef and vegetables).
How is your beer connected to the local area?
At Poco Loco we always stay connected to local breweries and we keep the most popular brews in our inventory.
How and why did you get into the beer industry?
After bartending for almost eight years you learn a lot about beer and spirits. Plus, trying new crafts has always been a hobby for me.
What makes midwestern beer distinct?
I think Midwestern beers focus on a more balanced flavor
profile, more fruits and floral hops are popular. What was your first beer ever? What was your first craft beer?
The first beer I liked was Guinness. First craft beer, Bell’s Best Brown.
What is your favorite type of beer?
I like Kolsch (a bright taste, similat to pilsener) or Cream Ales.
What beer trend are you excited about right now?
Brut IPA’s (a pale, dry and highly effervescent style).
Where do you think the craft brew movement is going next?
Who knows!? It’s constantly evolving but I feel like it’s really blown up in the past ten years. What is your favorite beer and food pairing?
I like contrasting flavors. The tried and true oysters and stout is a great example.
What makes midwestern beer distinct?
Friends and family. Laughs and food. And it just tastes good!
What are the best and worst beer name you have heard?
The best: Flying Monkeys Juicy Ass. The worst: Gandhi-Bot IPA.
Suggest a beer for someone who hates beer.
I find a lot of wine drinkers enjoying goses and saisons. Straight up haters— I’d send to a cider. How is your beer connected to the local area?
We partner with Maumee Bay Brewery for our seasonal features and exclusive Mancy’s beer. Local brewers regularly host our Friday Night Flights. In general, we like to focus on regional brewers, mostly Ohio and Michigan!
What little known brew should everyone be drinking?
Wild Side Brewing Native Star.
Where do you think the craft brew movement is going next?
Nano-Breweries! I think that we will continue to see many local breweries popping up across the country. Brew pubs are just getting started in the Midwest.
If you could drink a beer with anyone, who would it be?
Obama, because I miss him. What is your favorite beer and food pairing?
I really love our new Impossible burger (it’s vegetarian and
somewhat guilt-free) along with Bell’s Oberon. Both are
light and “summery”! – EH
What little known brew should everyone be drinking?
There is a small brewery in Petoskey, Michigan and we have one of their beers right now called “Horny Monk” which has been super popular. It’s a Belgian Dubbel, or Belgian style ale, that I actually really enjoy even though I don’t normally care for dark beers. It’s a little sweet, but still smooth and complex. -EH
Suggest a beer for: someone who hates beer.
Goose Island 312 Urban Wheat Ale is as safe as it gets for someone who is trying to drink craft beer for the first time. It is a perfect summer beer, specifically while attending a sporting event (or in our case, watching on one of our seven TV’s), and at only 4.2 ABV, even someone who is relatively squeamish at the taste or smell of beer will have no choice but to order a second or third!
-AL
Suggest a beer for someone who does not think craft beer is worth the hype.
21st Amendment Brew Free or Die IPA is as good as it gets for a smooth, craft beer. Brewed in San Francisco, it is one of our best-selling IPA’s. The beer has a malty beginning, and eventually gives a relaxed, citrusy taste. It pairs incredibly with our tater tots. —AL What is the last beer you drank?
Samples from the barrels here.
What do you look for in a beer?
Passion.
How is your beer connected to the local area?
Our beer is made with Ohio ingredients and Ohio yeast. No other beer could possibly better represent our area.
How and why did you get into the beer industry?
If art is the creative skill of making the world around you a better place, there is no better artform than brewing. Except maybe music, which obviously goes hand in hand with making and consuming beer.
What is your favorite type of beer?
American Barrel Aged Wild Ales. What is your favorite beer and food pairing?
I’ve always been told there’s a steak in every beer. So, who needs food?
What was your first beer ever? What was your first craft beer?
Busch Light and then Great Lakes Brewery Blood Orange Saison.
How is your beer connected to the local area?
We have a great selection of domestics but try to keep Maumee Bay Brewing Co. and Great Lakes Brewing Company on tap year round. More recently, we’ve added Black Cloister Brewery Company’s Helles Angel Lager to our lineup.
What makes midwestern beer distinct?
It’s a nice mash up of both East and West Coast styles with a midwest spin. 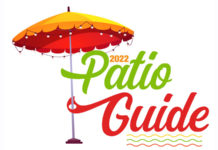