Ode to the ZipCode 2019 Submissions 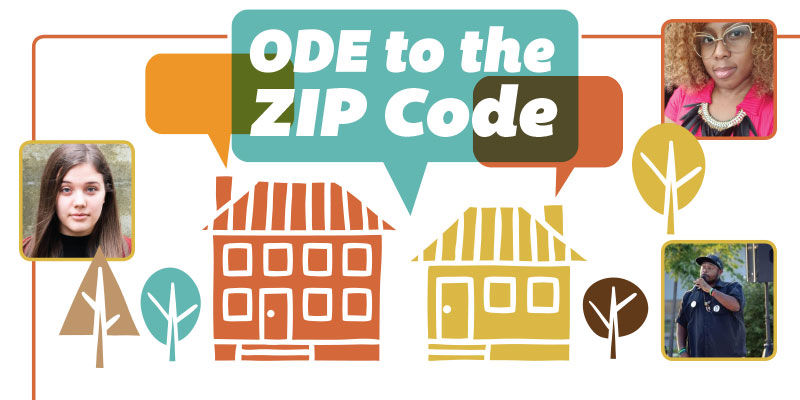 Toledo City Paper joined The Fair Housing Center, the Arts Commission and the Toledo Lucas County Public Library in asking Toledoans to submit short poems inspired by their ZIP code — with the number of words in each line of the poem determined by the corresponding digit in their zip code. The contest, which began in 2016, received over 250 submissions this year. Here’s a small selection of those which scored highly with our judges.

Hear from these poets, and see which poems are named the best by our panel of judges at The Ode to the ZIP Code celebration during the first Art Loop of the year on Thursday, April 18, from 5:30-7:30pm, at Handmade Toledo (1717 Adams St.)

WiFi doesn’t extend to
my front porch
so I read, rock, wave hello
as if
(the last century never happened)

—Lydia Horvath
43620 resident for the past 18 years.
A brief description of your inspiration for the poem: One of the best things about living in an Old West End house is the big front porch. I actually love that the mild inconvenience of having my favorite summer relaxing activity is wifi-free and forces me to do “old-fashioned” stuff like interacting with neighbors and listening to the birds.

Older man riding his
bike hangs two
pale buckets on rusty handles.
Where was he off to
Again?

—Avery Thompson
43551 resident for nine years.
There was this man that rode his bike past our street almost every day; he always had two buckets full of seemingly random stuff with him. I never knew where he was going, nor did I know what the stuff was for, and one day he up and left.

—Monique Ward
43608 resident for seven years.
My poem is a dedication to the community that I have chosen to call home and where I raise my family. I always enjoy hearing the sounds of all the young children playing at our local park in the summertime. Also, I love the fact that we have a great pizza place right down the street, for those nights that I don’t feel like cooking.

summer is red here,
all days at
Jackie’s, spilling ice cream over
our hands till
they’re sticky, lips coated with sweet strawberry.

—Annie Williams
Maumee resident for all of her 16 years.
The poem was primarily about summer, one of
my favorite times to experience the city. An
integral part of any summer here for me includes
ice cream at Jacky’s near downtown Maumee,
which is what inspired much of it.

—Jodie L. Summers
Eastside resident since 2011.
My poetry comes from my life experiences. I spent years trying to tell people the things that I saw. I decided to write them down, so I could reach people who would never get a chance to meet me. Spoken Truth is my way to reach you when I’m gone.

i wake up to
a gunshot, no
a firework, my heart pounds as
music
bleeds through

—Lizzie Nuhfer
43612 resident all of her 17 years.
My inspiration comes from the times around July when, either before or after the fourth, I always hear loud shots and wonder if it’s a gun or fireworks, because my neighbors like to scare us half to death. One time it was a gunshot.

—Terri Draper
43615 resident for all of her 19 years.
The inspiration for my poem is the rapidly changing technology of my generation, from cigarettes that became vape pens and physical video rentals that became video streaming services. Without change, there would be no story to tell.

—Lydia Babcock
Although I don’t live in this zip code, one of my best friends does, and her house is a second home to me. She has lived there for seventeen years.
I was leaving my friend’s house late at night last summer a couple of days before I would be out of the state for three weeks. I was nervous about leaving my friends and family, but felt especially sad to leave my friend’s dog who wouldn’t understand why I would be gone for so long.