The building that is home to Adams Street Publishing, publisher of the Toledo City Paper, got a new look in October with artist Gail Christofferson overseeing the placement of her latest mural project— a collection of huge, abstract portraits, largely made of glass pieces. Some of the portraits are of recognizable figures — Abraham Lincoln and Vincent Van Gogh. The balance of the displayed faces are not as well-known, but to the artists who drew them, they speak volumes.

The mural, Shattering Stigma— The Faces of Mental Illness, including portraits of Lincoln and Van Gogh— both of whom suffered from depression— was curated by Christofferson. The permanent display includes images derived from self-portraits of individuals involved in the Zepf Center’s Expressive Art Program. Together the abstract portraits create a tableau of what mental health issues can look like, both to the outside world and from within oneself. 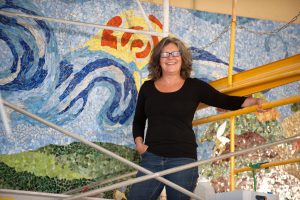 “If we can talk about it openly and honestly then it isn’t in the closet. (We are not saying) let’s hide it from everyone. That’s the goal of my art,” Christofferson said. “I think if the community sees a piece of public art and they question what it’s about, then they in turn take the next step and talk about it with their family or their friends, and it just becomes a more natural conversation.”

Beginnings and collaboration
The project began with a grant from the Toledo Community Foundation and the Lura M. Lovell Foundation,  to create a piece that helped reduce the stigma around mental illness. Christofferson, who had been awarded a similar grant in the past, chose to collaborate with the behavioral health experts at the Zepf Center. She met with Stacy Spinazze, the head of the Center’s Expressive Art Program.

“She had these self-portraits that her clients had done,” Christofferson said. “And I thought, ‘Oh! Those are super cool!’  We considered famous people who had suffered from mental health issues, and we thought, let’s include a couple of famous people with these portraits.”

Helping hands
Work on the individual tiles that make up the mural began before the lockdown. Christofferson borrowed a conference room from the Toledo Public Library’s main branch and employed the aid of Toledo Streets Newspaper vendors to help shape (or “nip”) the glass pieces that would make up the tiles.

“Do you think I could nip all this glass? My hands would fall off! So what I do is, I use them as my nippers, and they kind of do that production for me,” Christofferson said. “We did that nipping right before shutdown. When the library closed, we were the last ones that used the conference room.”

The mural was originally scheduled to be completed in June, but plans changed. Production of the tiles began again in earnest over the summer, with the aid of clients at the Zepf Center. Christofferson said that each of the seven separate portraits is the result of roughly 20 hours of labor.

Christofferson says to those who suffers from mental health issues, “You’re not alone. Mental health affects every family. And by starting that conversation, we can reduce the stigma.”