Members of our staff at local events. We got photos!

If you’re looking to get swimsuit ready without the gym, Angie Scott and her team have the answer for you. Adams Street Account Manager, Jaclyn Lebert, stopped by for a fun and informative session introducing their new equipment and amazing results.  To learn more, visit angiescottskinhealth.com. 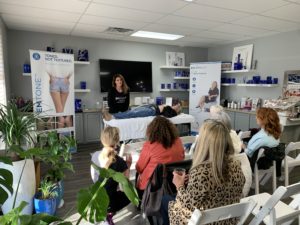 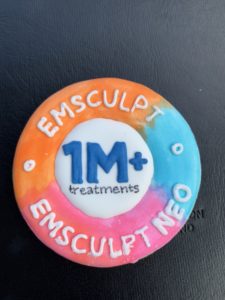 City was at the station, Imagination Station, for Science After Dark Thursday.

Account managers, Gabrielle Huff and Jaclyn Lebert, spent “The Night of the Living Dead” dancing on the piano and jousting in the inflatable ring.  Exciting science demonstrations and tests of survival were also crowd favorites.

In addition, students from Salon Institute turned attendees into zombies who then lumbered up to the bar for the featured  “Zombie Killer” to quench their thirst.  It was a night of extraordinary creepy fun!

On Monday, March 21, a special event was held at the Toledo Museum of Art’s Libbey Court in celebration of Women’s History Month. The gathering celebrated two landmark events for the advancement of equal rights for women in Toledo: the debut of the Northwest Ohio Women’s Business Council and Toledo City Council’s passage of an ordinance recognizing CEDAW (Convention on the Elimination of All Forms of Discrimination Against Women). The presentation featured remarks by a variety of local dignitaries and Dr. Soon-Young Yoon, United Nations Representative of the International Alliance of Women.