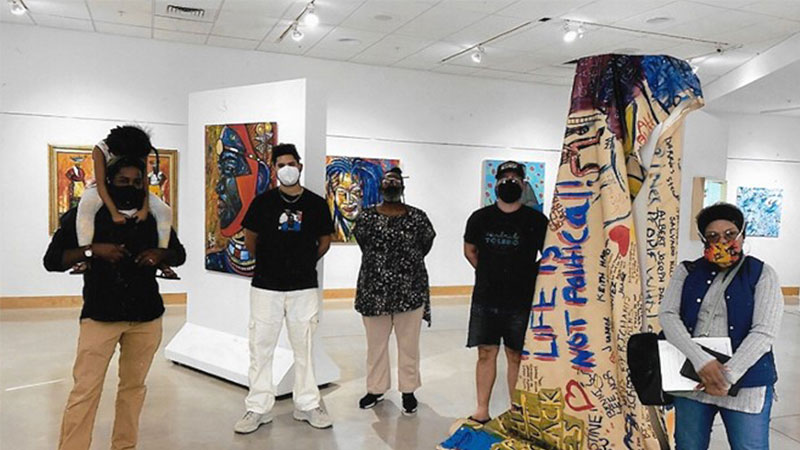 Since it began last year, the Toledo Black Artist Coalition (TBAC) has aimed to bring together and support the work of artists of African descent and people of color. Now, through a survey on the group’s Facebook page, TBAC seeks artists ready to support and join the group as it prepares for the coming year. “TBAC wants to grow to become a tool for artists and organizations to find one another. This survey is an important step in that direction,” said Yusuf Lateef, the group’s co-founder.

Lateef, a respected local visual artist whose work in painting and drawing has made him a Toledo artistic mainstay, said that the response to the survey has been positive. He’s hopeful that survey participation will increase as TBAC continues to grow. “We are currently in the process of structuring the group to ensure that we become a viable resource to local and regional artists,” he said.

Filling the void
TBAC took shape in the summer of 2020, in the wake of the George Floyd protests. “The Toledo Black Artist Coalition’s mission is centered around creating avenues of artistic legacy through advocacy, education, and activism,” Lateef explained. “Throughout history, the African American perspective in the arts has been omitted, leaving a void within many mainstream cultural institutions.”

Lateef argues that the legacy of African American artists is woven into every facet of society, but their importance has been clouded in the public’s mind by external forces. “In my personal opinion, the contributions hold great value but the structures have been built to keep us invisible,” he said.

“In reality, Toledo Ohio has a rich legacy of African American artists who formed collectives to provide resources and education within the greater community. This contemporary group was formed within the context of the current national and international movement to end white supremacy. It is our ongoing goal to create pathways for artists of color and combat racial inequality as it continues to manifest within, and in relation to, Toledo institutions of culture.”

Ready to Launch
The group’s first big step in addressing those inequities came in the form of Launch! Art in the Age of Solidarity, an exhibit which ran this past fall at the Terhune Gallery in Perrysburg. Acting as an artistic coda to the protests and progress of the preceding summer, Launch! brought together the work of a variety of artists to explore the idea of unity in a time of social turmoil.

“The exhibition at the Walter Terhune Gallery at Owens Community College was a great success,” Lateef said. “Thanks to the help of Shelby Stoots, the gallery director, we were able to safely share the work of a phenomenal group of artists.”

As the new year begins, Lateef is hopeful that TBAC’s reach and message will continue to grow in the months to come. “In the coming year we should see more exhibitions, partnerships and artist outreach,” he stated. “Toledo’s long history in the arts is good soil for new ideas.”

If you’re interested in working with or joining the Toledo Black Artist Coalition, fill out their survey by visiting
facebook.com/ToledoBAC.