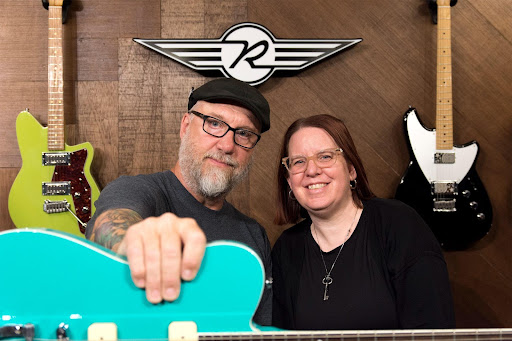 From its origins in a garage behind a bicycle shop in Detroit to arenas around the world, Reverend Guitars is a brand proud of its heritage and reputation for innovation.

Founded in 1997, Reverend has become the choice of professional musicians, weekend warriors, and beginning players learning their first chords. Guitarists like Billy Corgan (The Smashing Pumpkins), Reeves Gabrels (David Bowie, The Cure) and Robin Finck (Nine Inch Nails, Guns N’ Roses) rely on Reverend to bring their songs to life in the studio and on tour.

According to the husband/wife duo and CEO and COO Ken and Penny Haas, the industry is experiencing a huge “guitar boom” partially attributed to people learning or upgrading during the 2020 lockdown. Despite being in competition with brands with greater longevity, Reverend — now celebrating its 25th anniversary— is pushing sales numbers beyond expectation.

“We’ve been growing this company for a lot of years now; I used to think the music industry was different from other industries in that you had to be in it for a while before people begin to notice you. But I think just about any industry is like that,” explains Ken. 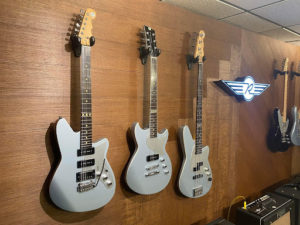 “Wild Forever” is the chosen tagline to commemorate the company’s 25th anniversary, representing a desire to make guitars that are unique, innovative and desirable for players who think outside of the box.

“What’s next” or “how can we make it better” are mentalities that keep Reverend moving forward. “We’re not afraid of change or being different,” Penny said. While Reverend focuses on unique designs and cool color options, they abide by a consistent effort to make guitars that are user-friendly to players on all levels.

To commemorate the 25th anniversary, Reverend released special editions of three of their guitar models— the Six Gun HPP, Sensei Jr., and Decision P bass. All three sport a “XXV” on the 12th fret in a metallic silver finish.

Much of Reverend’s success is attributed to their ability to fill roles from the ranks of their fifteen employees that play off the company’s strengths and knowledge.  The Toledo music scene is acknowledged for embracing the brand since moving down from Michigan in 2016.  Around the Glass City, bands of all genres can be seen rocking guitars with the “Circle R” on the headstock. Joe Naylor creates and fine tunes guitar designs, allowing players to get the sound and feel they’re looking for, without compromise.