It was during a conversation with her mother a few years ago that filmmaker Ruth Leonard realized something— she had almost never seen her father cry. And at the rare times that Ruth had seen the tears of her father, it had always been jarring to her.

“In thinking about that, I started to wonder, why had I only seen him cry a couple of times in my entire life? Then I thought about how it made me feel, and why I was so uncomfortable seeing him show emotions,” Leonard said. “I wanted to unpack men’s views on their relationships with emotions, and to see if it was something universal, or something just unique to my father. And, I quickly found out, it was universal.”

Leonard began conversations with Toledo area black men, filming them on her iPhone. Talking about masculinity, displaying true feelings, handling the expectations of a society that implies that men should bottle up their emotions. She began editing the footage, again, completely on her phone. “They (the interviewees) expressed how their relationships manifested their beliefs about masculinity, and how that played a role in making them who they were and (in shaping their perceptions of) how society sees them.”

The resulting short film, Black Men: Unfiltered, sees subjects from a variety of backgrounds, giving voice to aspects of their experience that they felt the need to bury. “It is basically an opportunity for men and women to sit down and get a firsthand account of what’s going through black men’s minds as it relates to their relationships with other women, their relationships with their father, and their overall mental health,” Leonard said. 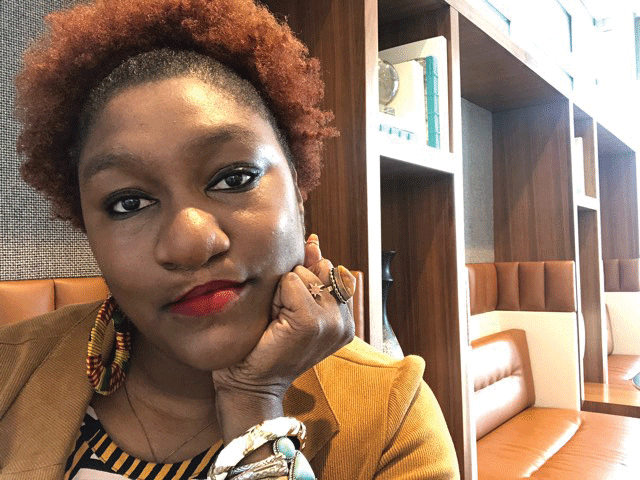 Leonard took care in how she approached the subjects for the film, making sure to let the men select where they’d like the filming to take place, to make them as comfortable as possible. She worked with friends and her mother to write the questions to ask, making sure to leave them broad enough so they would lead to fruitful responses. “The questions were designed to allow men to interpret the question, and then to answer it in their own way.”

The response to the short had such an impact on Leonard that she continued filming, with an eye on expanding Black Men: Unfiltered into a four-part series. Still editing footage of future installments, she launched a Kickstarter Campaign in early 2019, to raise funds to support the project. However, the campaign failed to meet its goal.

The campaign was “to get better equipment, to be able to perform better editing and to (allow me to better establish) how I really see the film being portrayed. There were certain parts where I can see room for improvement if I had a bigger screen to work with,” Leonard explains.

Undaunted, Leonard launched a GoFundMe Campaign in August with a more modest goal. That campaign is still active. To bolster the effort, she has booked continued screenings of the original short. Everywhere she’s shown the movie, she’s seen the impact of these interviews on audiences— including on her own father.

“My father was able to articulate feelings that he had been holding onto. He just couldn’t figure out how to let his own son know how he felt. But it was after watching the film, and seeing all these other men be vulnerable, that he was able to have that conversation.”

Learn more about the documentary and upcoming screenings by searching for ‘Black Men: Unfiltered’ on Facebook. A rough cut of the first short film can be seen at:
https://youtu.be/dwpYniaeY4g