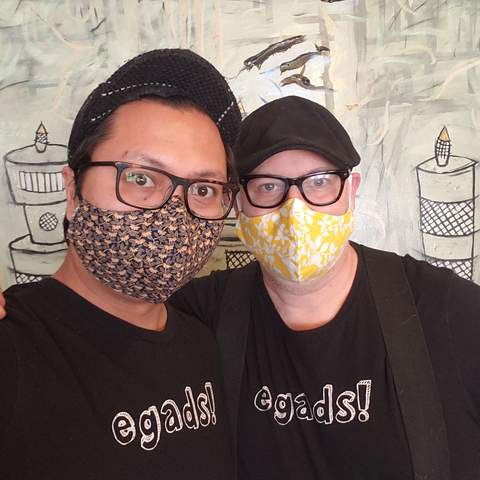 If there’s such a thing as a silver lining during a pandemic, it’s that people and communities often pull together more than usual. Jeff Ball and Remigio Darby— s married couple and co-owners of Egads!, an online craft store— have been doing just that. Over the last month, they’ve kept busy by sewing masks and giving them away to the people in their neighborhood community.

Thinking Outside of the Box

“We had a sewing machine in the basement, still sitting in the box. [The pandemic] seemed like a great reason to try it out”, says Ball. “I have to admit— the first few were pretty rough.” Already having printmaking and other creative abilities, the two learned how to sew pretty quickly.

They began leaving them on their porch and posted on the neighborhood Facebook page for people to feel free to take them. Folks in the area, from Zoo employees, hospital workers, and anyone else in need, have been returning the favor by leaving fabric, elastic, and donations of cash and snacks.

With the donation of supplies, “we’ve made about 600 masks by now,” says Ball. “Most of the people in our neighborhood have one, but we’ll keep making them as long as there’s a need.”

How it All Started

The couple moved to Toledo about four years ago, carrying forward with their Etsy shop that they started in Denver. “At first, it was mostly selling vintage stuff,” Ball explains. But when they came to Toledo, they started screen printing out of their house as well. “I used to run a nonprofit arts center in Denver that had a community screen printing studio and gallery,” says Ball. That’s how the two began incorporating that into their online store.

Ball and Darby met while they were both living in Denver, with Ball being a Toledo native and Darby originally from Joplin, Missouri. “After living in Denver for a decade, Toledo was a nice change of pace,” says Darby. “We always came here for holidays, and it was always a little bit of a retreat.”

With so many hidden gems in the Toledo area— from all of the nature parks to the vast region of the Maumee River watershed, “Ohioans sometimes overlook the serene quality of Ohio nature,” says Darby.

“And honestly, our party days are probably behind us, so that part (of leaving Denver) doesn’t bother us either,” says Ball.