A microphone stand. Shoes and purses. Pillows and towels. A foosball table. Barbie from the 2020 Olympics. A full drum set and a barbecue grill. A wheelbarrow. And all “unboxed” and up for sale at The Great Unboxing Store in Sylvania.

If you’ve ever done an “unboxing,” you know how exciting it can be to find treasures among the regular merchandise in your mystery box. It’s a popular video concept on YouTube, and the basis of the store.

“It’s like a treasure hunt whenever you come in,” explained Danny Proshek, vice president of customer relations at the store. Products are organized in broad categories, such as kitchen and cooking, outdoor and gardening, clothing and shoes, household and bedroom, kids and toys, and odds and ends.  But what you might find among the bins is a big part of the fun.

The local store was opened in August 2021 by Dr. Jamey Schmitz, owner of WLMB-TV in Toledo. Proceeds from the store benefit the Christian television station, which serves northwest Ohio and southeast Michigan. The store’s name is taken from a locally produced WLMB program of the same name.

Proshek explained that the store is supplied by truckloads of overstocked products from popular retailers, such as Target. They also recently received a truckload of Amazon returned products, which yielded some interesting items.

“One of the products we received from this shipment was a transmission cooler for a 2012 Chevrolet Suburban,” Proshek said.

In one week, the store featured several Barbie dolls and homes, a foosball set, baby car carriers and a radio-controlled kid’s vehicle, complete with Bluetooth and an AM/FM radio. By the next week, those items may be replaced by an almost completely new inventory.

Many ways to shop

The best way to find new treasures is by visiting the store, located at 3315 Centennial Rd. Suite M, near Central Ave., in Sylvania, and exploring all its nooks and crannies. But you can also look for great deals online, as did the shopper who snagged a new, full-sized espresso machine that was shipped to California (Proshek said they ship throughout the U.S.).

You can also pick up your online order at the store. “We even have several people who have asked about very specific items they’re looking for,” Proshek said. “We let them know when we have something we think they might like to see.”

The store also hosts a Facebook group where visitors can learn about new shipments and items for sale at the store. Giveaways and auctions are also held through the group. 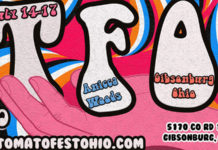