If you thought the vegan movement was merely a fad, think again. Vegan products have transcended our refrigerators and pantries, and have now infiltrated our vanities. While green beauty is a global trend, Toledo-native Mary Papadimos brings vegan beauty products to the heart of the 419 through her company “Beets & Blush”

Ingredient labels can be overwhelming with microscopic jargon, with many unfamiliar words. Unless a product is clearly labeled with a vegan certified logo, it is difficult to decipher whether it is truly vegan-friendly.

“Beets & Blush” removes the stress, providing an entirely vegan beauty line featuring only natural products. The “Beets & Blush” website lists every ingredient, many of which are edible and organic. “I think that what we consume is just as important as what we put on our bodies,” Papadimos said. “I don’t want anyone to put anything on their body that I wouldn’t put on mine.”

Papadimos knows a thing or two about managing a busy life. As a dual MBA and JD student at the University of Toledo, Papadimos also hosts a vegan food and lifestyle blog called “Upbeet and Kaling it”. “As busy women, I don’t think any of us should have to think twice about what kind of harmful ingredients are in the products we use,” Papadimos explains. “My heart and soul goes into these products because I genuinely care about what people are putting on their bodies and that translates into the quality and effectiveness of my products.”

Though Papadimos admits her products aren’t as likely to last as long as well known major cosmetic brands, it doesn’t mean they aren’t high-quality. While the product application might not last 24 hours, the tradeoff is knowing you aren’t wearing harmful ingredients. 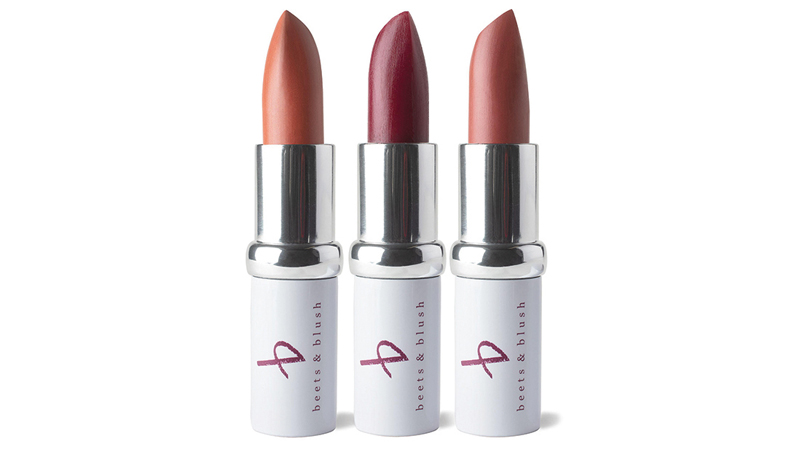 Though “Beets & Blush” officially launched in late June, the planning and creation of the products began well before that. After shifting from a vegetarian diet to a vegan diet, Papadimos started paying more attention to other areas in her life. “I’ve been wearing makeup since I can remember. As a little girl, I remember using my mom’s makeup and just making a mess on my face.”

Curiosity fueled Papadimos’ action to aleviate her frustration. After her first year of law school, Papadimos considered her future and decided to follow her passion rather than a traditional career in law. She sought out local grants for funding and through the course of three years received enough grant money via UT Launch Pad, JumpStart Toledo, and Toledo Entrepreneurial Development to launch “Beets & Blush.” The support from Toledo leaves Papadimos feeling grateful. “I have been afforded so many opportunities in Toledo. I would like to bring commerce to the area.”

Beets & Blush features five beauty products— three lipsticks, blush, and facial spray – but Papadimos intends to expand her company by adding deodorant, foundation, and more lip colors. Currently, Papadimos is a one-woman team, but the terms of her grants require her to hire employees within the next year.

The products are created and packaged in California. Fulfillment, labeling and second-packaging is done via Toledo businesses. Products can be bought on the Beets & Blush website and, soon, through Amazon.

Papadimos’s goal is to sell her Beets & Blush products in Europe. And while that might seem like a lofty dream now, if you had told her ten years ago that she would be marketing her own vegan beauty line, she would have looked at you skeptically. So Europe might not be too far off.