Mark and Mike Kersey— the twin brothers whose evocative and enchanting paintings have wowed Toledoans for decades under the name “Mr. Atomic”— are two of the most endearingly offbeat and eccentric personalities of the Glass City art scene. Forever cracking jokes, the pair have an engaging demeanor that makes them as fascinating as the pop-culture-inspired work they produce.

Nowadays, however, the Kerseys seem increasingly aware of the passage of time. Their combined age is 130, and between them, they have over a century of work as artists in the rearview mirror. So as the brothers open an exhibit of their latest works at the Paula Brown Gallery on Monroe St., a new note begins to find its way into the Kerseys’ typical demeanor. Is that introspection?

“We take our painting very seriously, more than ever before,” Mark Kersey said. “Because we know that the time, the shadow on the wall is lengthening … and that you can’t be as flippant with your cavalier attitude as you used to be. So even though we retain our self-deprecating sense of humor, we more than ever want to leave a grand legacy of excellence in the arts.” 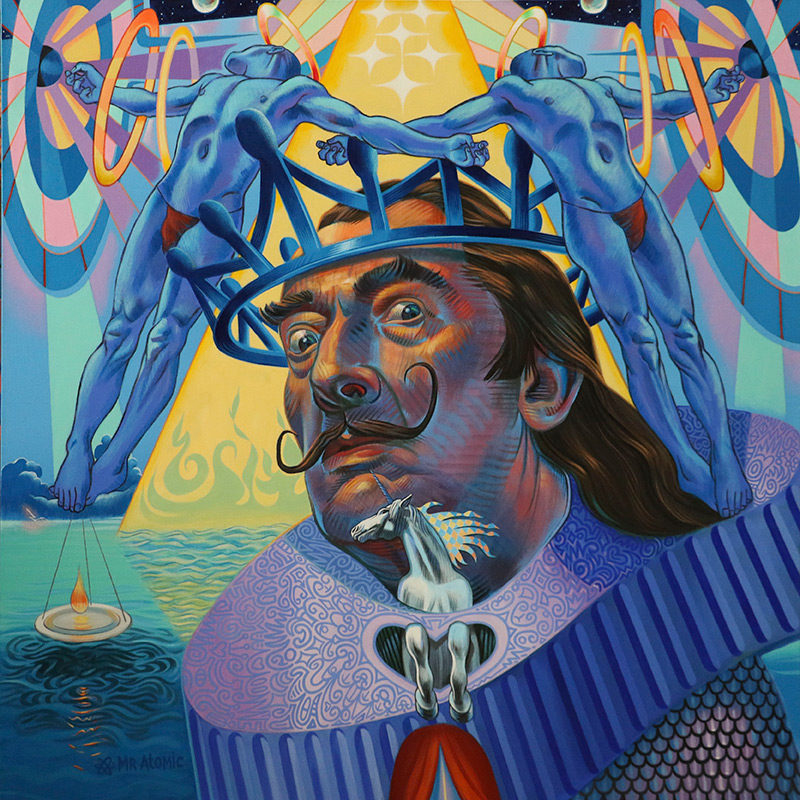 Best work of their lives

Of course, immediately after saying that, Mark boisterously added a reminder to make sure to “dot the exclamation point” on that last sentence. That wicked sense of the ridiculous is still intact; even as the pair are reaching something resembling their twilight years, they remain committed to turning out the best work of their lives.
“We’re pouring every bit of our integrity into our new paintings,” Mark said. “Regardless if the subject matter doesn’t appeal locally, regardless if the ultimate price when it goes up for sale does not appeal to our economic condition here in Toledo, we’re painting more than ever, totally for ourselves. Trying to make a statement, and a powerful statement at times, whether or not it’s lighthearted, whimsical or of a serious nature.”

The exhibit at the Paula Brown came about after a patron dropped the name of the gallery after purchasing a work from them last year. The Kerseys, who had never visited the Paula Brown Gallery before, stopped by and opened a dialogue that led to the three-month exhibition which began November 15. “It worked perfect for us and them,” Mark said.

“It’s really the best of our work. We have all our latest work there. We do currently have four pieces of ours at the Toledo Museum of Art gift shop, and we love those, and those are current, also. But between the two it pretty much defines the sensibilities of Mark and Michael Kersey as it pertains to our aspirations to artistic excellence.”

Those aspirations clearly inform every piece the brothers are producing these days. “You can expect our work to show alongside what you might expect to see in some place like New York City or Los Angeles,” Mike Kersey said. “I certainly think it is of that quality. I can’t do any better.”

He paused. “Of course, unless Bill Gates offers me a check that I can fill in the numbers, then maybe I can do better.”

On view through February 15.